Up could conceivably be the most popular work of genuine cinematic art since E.T. (Grade: A) 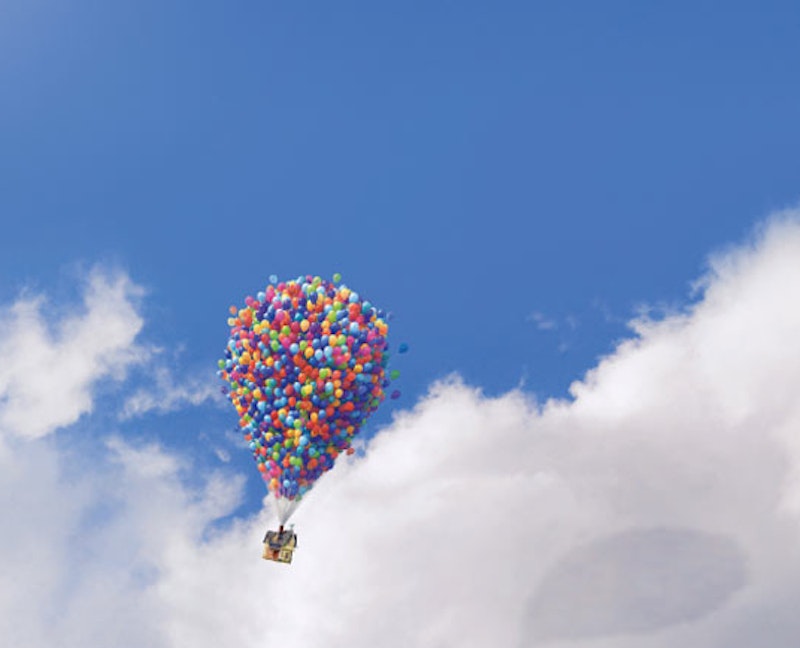 This week, Disney and Pixar release their 10th feature-length animation film in the last 14 years, and while about half of them have been lavished with praise, deservedly or not, for their innovation and emotional maturity, Up represents such an enormous artistic leap forward that audiences may not be ready for it. But by virtue of Disney's involvement, it stands a good chance of being wildly popular, and the effects of that popularity could be positive and inexorable. It's one thing for director Pete Docter and his artistic team of hundreds to have made a movie as emotionally rich and technically outstanding as Up in the first place, but by managaing to have it bankrolled and marketed by one of the world's most visible, powerful, far-reaching, and sellable companies, his film stands to be a paradigm-shifting cultural event. In other words, few cinematic achievements this bold and engaging come with a $200 million price tag and Aflac tie-in.

There has been a lurking mistrust of American culture in Pixar's films since at least Finding Nemo, which was the first earthbound of their films to take place outside the U.S. And even Toy Story illustrated Buzz Lightyear's growth by undercutting his prewar-era movie optimism. To a degree, Up represents a continuation of that trend, which drew us from Australia (Nemo) to France (Ratatouille) to an America-destroyed earth and refugee camp for obese, mass cultured gluttons (WALL-E). But when I say that Up is a distinctly non- (as opposed to un-) American film, I mean that in regard to its view of the world; the sensibility of this movie is so defiantly not of Hollywood that it’s incredible to think of so many viewers emerging from the theater into food courts, as many surely will and I did two nights ago. In its respect for the elderly and the process of aging, Up has a resonance like that of the great postwar Japanese films. In its unflinching but heartfelt depiction of childhood joys and traumas, it is comparable to Truffaut’s Antoine Doinel movies. And in its embrace of solitary grief, transcendent group intimacy, and fable-like emotional simplicity, it often feels nearly Italian. Up's antecedents are Tokyo Story, The 400 Blows, and La Strada as much as The Lion King.

But it is also, much more than any Pixar movie yet, a gorgeous, evocative tribute to America and Americana. From the reproduction of classic newsreel and B-movie footage (a long-running Pixar hobbyhorse), to the fact that it's being released in shiny new 3D technology like a mid-50s matinee, Up feels persistently adventurous and optimistic like only classic Hollywood movies can feel. It is so proudly American in all its pluck, vibrancy, and romanticism that it reveals how cynical we've become as pop consumers over the last decade. It signals that, while perhaps a trend towards urban decay and dystopia in our recent culture (whether artsy like City of God, high-minded like Children of Men, or family-friendly like WALL-E) has been socially understandable, we’re due for a reappraisal of our national cultural identity. The political implications of this message are self-evident and not germane, since Up transcends politics; instead it entertains with Charlie Chaplin and Buster Keaton's gusto and confidence, and with Stagecoach or The Wizard of Oz's to-the-hilt emotionalism and entertainment value. It explicitly references those movies as well as Hell's Angels, at its time an unprecedented Hollywood spectacle of melodrama and action. Up is a truly global movie in a way no movie has been before; short of the equally brilliant E.T., it's hard to think of a film this worldly in its sensibility yet so expensive in its presentation.

We first see Carl Fredericksen (Ed Asner) as a young boy, his ebullient young face staring simultaneously up at a movie screen and right back at us. He is, like so many American boys, guided in life by pop culture, in this case the adventure films of a Howard Hughes-like pilot named Charles Muntz (Christopher Plummer). We never see Carl with his parents but we gather, through the artists' and animators' poignant long takes and haiku-efficient dialog, what kind of loneliness he experiences. It is the optimistic loneliness of childhood, captured so vividly by E.T. and Carlos Saura's Cria Cuervos but also in recent films like Eternal Sunshine of the Spotless Mind or Let the Right One In. Up gets unbearably emotionally intense at times; this is a Disney movie in which people die, animals suffer, would-be mommies miscarry, childhood heroes turn out to be evil, parents don't always support you, and the natural world is shown to be equally fascinating and terrifying. But all this sadness and pain is done with a gentle touch not seen in Disney films since their earliest productions.

Carl's experience, shown in a staggering montage early on, includes a lifelong, completely non-sexualized romance with Ellie, his childhood friend who also shares his passion for flying machines. The two marry, Ellie grows old and dies, and within minutes of our opening shot Carl has grown into a curmudgeonly, reclusive widower. He refuses to sell their beloved Southern-style home (reminiscent of Auntie Em or Alice Adams’ houses) as urban sprawl develops ceaselessly right outside their lot. But an altercation with a stranger ends when Carl bludgeons the man and is sentenced to a nursing home; rather than succumb to forced domesticity he channels his wife's adventurous spirit and launches himself into the sky using balloons to carry his house. In a Buster Keaton movie, this house, like the train in The General, would be considered a “prop,” and here it fulfills the same function of ordering human behavior. It gives the film its shape and speed, and Up proceeds with its stateliness and gliding pace, even as it periodically immerses us in thrilling, miles-high action sequences.

The image of an old man launching himself into the sky to connect with his dead wife is so universally poignant that it’s almost fable-like. It's a throwback to the days when Disney borrowed other cultures' myths and repackaged them with anthropomorphic slapstick and songs, only Up has neither. It turns out that Russell, a well-meaning but slightly slow neighborhood boy scout, was on Carl's porch during liftoff, in continued search for his final merit badge: Assisting the Elderly. So the two outcasts are tethered to one another in a horrifying, potentially deadly, yet visually spectacular predicament. In another satisfying, subtle touch, the filmmakers have taken a stock Americana character—the boy scout—and made him authentically of our time: his knowledge of GPS and current technologies doesn’t shield him from very real-seeming issues of abandonment and parental neglect, just as his obvious Asian ethnicity is never explicitly mentioned. (There’s a nod to the implications of this pairing in that Carl’s character is clearly modeled on Spencer Tracy’s Guess Who’s Coming to Dinner style.)

When the balloons come out from Carl's house, then later as the building floats soundlessly above the clouds, Up is often so visually beautiful that it's inspiring. Animals come into the picture, yet they aren't made human—there is actually a running joke based on the fact that dogs' brains work differently from ours, while one of the film's most wrenching moments comes as a comic-relief bird caws for her starving babies. Animals have always figured prominently in Disney's films, but this is the first that celebrates our differences with the animal kingdom without exaggerating our commonalities. Imagine the possible impact of a Disney movie that teaches children such respect for the aged and such celebratory honesty about the natural world.

Up is without a doubt the best film I've watched for review, and perhaps the most visionary bit of corporate entertainment produced in my lifetime. It’s also the first time I've felt some semblance of the awe I assume audiences felt upon watching Snow White or Pinocchio in the early 1940s; it is Disney audacity and bravura entertainment but without even a trace of schmaltz, and even a European familiarity with life's edifying traumas in its place. There is cuteness as well as darkness in Up, but the movie plays these often manipulative qualities off one another in incredible ways, like when an elderly Ellie follows her husband up a backlit country hill and staggers halfway; the characters look adorable, yet they anchor an affecting, not maudlin, image of human decay. (The same can't be said of the film's trailers, however, which make it seem cheekier and cuter than it plays onscreen.)

But here's the important thing: I saw Up in a mostly packed theater, where at least a third of the audience was under 10, and we were all riveted. Here were a few hundred children watching a movie with genuinely unsettling emotions and set pieces, which reveled in life's darkest moments as well as its joys, and not a single child spoke or looked away as, for example, Carl paged through his old photo album and relived decades of memories to a minimalist score worthy of Satie. (Michael Giacchino deserves credit for his entire score, which uses beautiful, simple melodies to anchor the triumphant visuals.) Toy companies and Disney's corporate partners have been in a fit over the last few months about whether Up's characters are marketable enough, but if worldwide children's audiences respond to this film like the one at my screening did, the filmmakers may achieve something more valuable than mere brand expansion. They may permanently alter the seriousness and emotional depth with which corporate monoliths advertise and produce things for children. They may increase the level of intelligence expected from our mass media, rather than just mocking its relative dearth as in WALL-E.

We won't know that until later, however. For now, it's enough of an achievement to have made a film this haunting that will play in megaplexes to millions of people who haven't even heard of Kenji Mizoguchi or Vittorio de Sica, let alone recognize their humanist touch underneath Pixar’s brand identification. I was nearly brought to tears, not only by the respect and beauty with which Carl and Ellie’s marriage is depicted, but at how successfully and entertainingly Docter and his team made young children care about the story of an old man’s desire for dignity and peace. The balance of compassion and popular appeal seen in Up is greater than even the best Disney films. It refuses to condescend to children just as it doesn’t bother with easy topical jokes to keep parents involved. Disney, that multimedia titan of commoditized sentimentalism and broad humor, has made something of such gentle, loving decency that Up feels nearly humanitarian. That's how pop culture progresses. That's how a culture’s artistic sensibility moves upward.