Especially when the acting is so good. 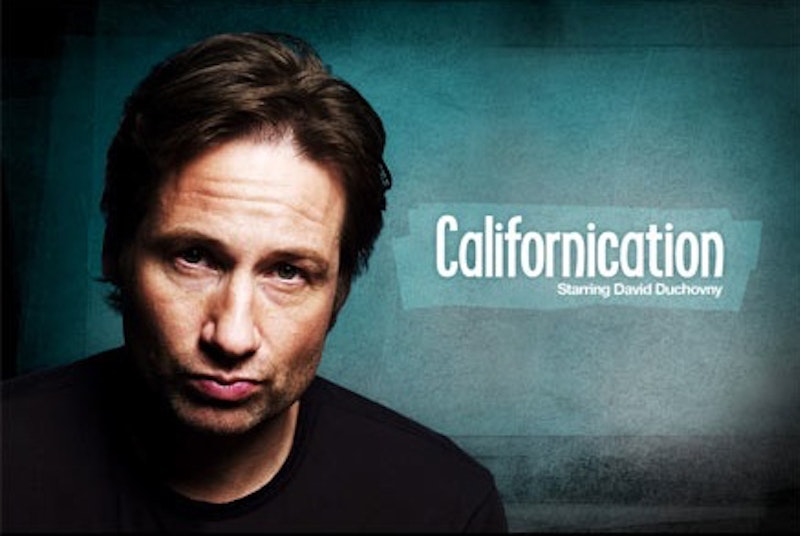 "People don't just bump into each other and have sex. This isn't cinemax." – Seinfeld

Baltimore's recent week of snowy hell, in which I spent about six or seven days un-showered, pantsless, and drunk, allowed me, among other things, to burn through all three seasons of Showtime's hit dramedy Californication. Anybody who read my Rescue Me article a while back knows I'm a fan of the cable dramedies, especially ones about boozed-up, chain-smoking assholes (you can speculate why all you want). Rescue Me and Californication are in fact so alike they might as well be packaged together in a box-set: same basic set-up -- a middle-aged wreck of a main character desperate to reunite his family -- same filthy humor, same awkwardly hilarious plot twists, same 'No, he really is a nice guy' sentimental scenes.

The basic setup: Hank Moody (David Duchovny) is a fairly successful novelist who moved from NYC to LA after his last book, God Hates Us All, was Hollywood-ized into a kind of Love Actually style sentimental comedy starring Tom and Katie. Hank is hung-up on Karen (Natascha McElhone), a long-term on-again off-again girlfriend with whom he has a twelve-year-old daughter, Becca. At the start of season one, Hank and Karen are in off-again mode, with Karen engaged to an internet entrepreneur named Bill. Although Hank has many problems, fucking pretty much any woman he wants isn't one of them.

Only a few episodes into the first season and already Christian family organizations like Family First were announcing a boycott of the show's sponsors. "Television programmers are simply using shock tactics to increase their ratings," Bob McCoskrie, national director of Family First New Zealand, said. "Families are sick and tired of this offensive type of programming." Duchovny doesn't agree:

What can't be argued is the acting: Duchovny turns in an absolutely stellar performance as Hank, allying us to an almost completely unlikable character. Few other actors would have the charm to pull it off. Likewise with McElhone, who ably manages the simultaneous confidence and vulnerability of her character. But it's Madeleine Martin (Becca) who manages to steal most of the scenes she's in with her smart and angsty disaffection. The supporting cast, including guest appearances by Kathleen Turner, Callum Keith Rennie, and Rick Springfield (yes, 80s pop icon Rick Springfield), are equally wonderful and always entertaining.

Even if Californication rarely manages the kind of literary loftiness it so often alludes to (season two, for example, is supposed to be a kind of re-telling of The Great Gatsby), it's still wildly enjoyable television. And though season three relied too much on predictable plot twists and throwaway drama, the last episode (in which an older character comes back to wreck havoc just as Hank's about to leave LA for good) was enough to make up for it all. And with that, I leave you with one of my favorite scenes: