One Brain to Rule Them All

Anti-intellectual? A critique of wage disparity among genders? No, The Big Bang Theory is just clever. 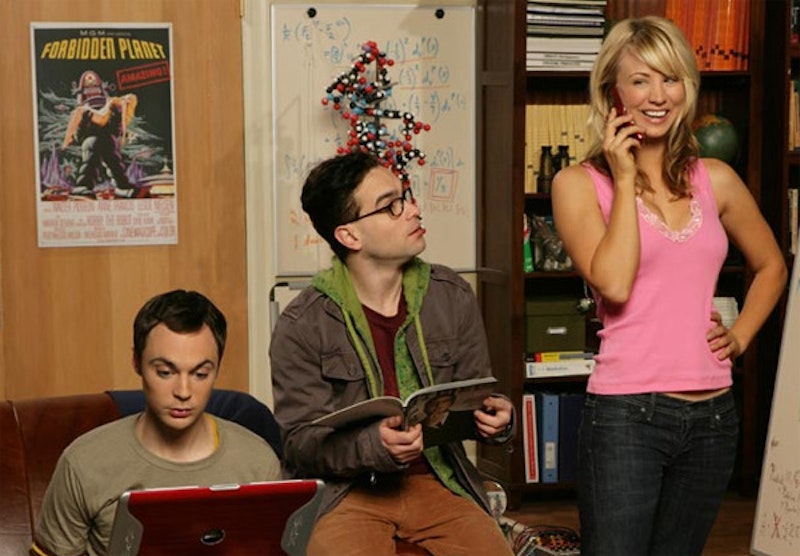 Americans in general, and American sitcoms in particular, take pride in being stupid, so no one is likely to be offended if I point out that the premise of The Big Bang Theory is somewhat dense. The show is based around the hilarious hijinks that result when a hot young waitress and aspiring actor named Penny moves into the apartment across the hall from a couple of nerdy physicists, Leonard and Sheldon. And … quick!  What’s wrong with this picture?

If you said, “Hot girls and physicists don’t go together!” you win because you’re on the median wavelength of your culture and can launch a hit comedy series. If you said “income disparity!” all you get is that smug satisfaction of feeling like you’re smarter than everybody else. Because while The Big Bang Theory reportedly uses consulting physicists to vet story ideas so that the writers don’t get their tachyons stuck to their gluons, nobody seems to have ever spoken to an economist—or to a real estate agent for that matter—which is to say: successful physicists. They make a fair amount of money; enough, probably, to live in a condo; enough money not to live with a roommate; and exponentially more money, in any case, than waitresses. Unless a waitress is some sort of slumming boho scion, she really wouldn’t be living across the hall from a physicist, much less across the hall from two physicists who needed to live together in order to afford their apartment.

In some sense, this blooper is completely gratuitous—surely you could have figured out some other way to bring together Penny and the physicists that didn’t violate credulity. Why not make her the department administrative assistant, for example? Or the waitress at a restaurant where they hang out? Or, for that matter, why not just say that Leonard and Sheldon are still in grad school?

To raise these possibilities, though, is to immediately see why the show’s creators discarded them. The whole point of The Big Bang Theory, its whole reason for being, is to poke fun at the nerdiness of Sheldon, Leonard and their friends/fellow social cripples Howard and Raj. It’s to show the intellectuals getting their pants taken away from them by Penny’s burly ex-boyfriend, or to watch their hideous relationships with their parents, or to observe as they pathetically strike out with various women. In short, what’s funny about the show is that the physicists are losers.

But, of course, by the standards of our culture, the physicists aren’t really losers at all. Or, at least, it would be hard to think of them entirely as losers if Penny were working in a subordinate position in their lab. Similarly, if Leonard and Sheldon were grad students, there couldn’t be a humorous disconnect between their professional pretensions and their lameness. Everybody knows grad students are lame; that’s a truism, not a joke.

So Leonard and Sheldon need to be full-fledged physicists if it’s going to be worthwhile to mock them. But, at the same time, the actual benefits of being physicists have to be downplayed, or the mockery would ring rather hollow. After all, this is a capitalist society, and if you’re making good money, you must be doing something right. Additionally, if the show acknowledged that Leonard was a high-earner, the sexual tension between him and Penny would have connotations that the writers would rather avoid. Penny worrying that she’s not smart enough to date Leonard is light comedy; Penny worrying about differences in earning power, though, starts to look uncomfortably like melodrama. Thus, while Penny does have money troubles, they are all carefully presented as temporary rather than systemic. And when she borrows money from Sheldon, it’s intimated that he has lots of money because he’s weird and autistic and never spends anything, rather than because he’s got a job at a research facility and is probably pulling down high five figures.

The Big Bang Theory isn’t alone in pretending that brainworkers are evolutionarily disadvantaged beta-males. Everyone knows that Bill Gates is (a) happily married, and (b) the most powerful person on the planet, but no one seems to want to generalize from there even a little bit. The fact is, though, that scary-smart geeks are not just smarter than folks like Penny—they’re also in a higher social class. As labor historian E.P. Thompson noted:

Social approval of educational success is marked in a hundred ways: success brings financial reward, a professional style of life, social prestige; it is supported by a whole apologia for modernization, technological necessity, equality of opportunity. It is not necessary to work long inside any university to discover that even the most humane among both staff and student bodies find it an effort not to equate educational achievement with a valuation of human worth.

And, of course, to twist the knife further, intellectuals are often actually high class first and scary smart later as a consequence of being able to access some fancy education. From this perspective, the anti-intellectualism looks less like know-nothingness or submerged jealousy than revenge. Geeks and their kin control the world. Penny and her kin can’t change that; so all they have left is to point out that their rulers are socially incompetent and sexually repulsive.

Anyone who’s seen The Big Bang Theory, though, knows that this isn’t a very accurate depiction of its tone. While the show is anti-intellectual, it’s in a very gentle, even loving way. As in a Woody Allen movie or a Jeff Brown comic, geekishness in The Big Bang Theory is emo chic; goofy, occasionally annoying, but ultimately endearing and even sexy. Leonard and Sheldon are good guys really…and why not, since in the show’s world, they really are just folks like Penny, working a nine-to-five job at the supercollider rather than at the local eatery. If geeks control everything, they also control the successful sit-coms. Leonard does hook up with Penny eventually, after all—a fantasy of nerdy-gets-hot-girl made all the more delightful by excising the income realities which would suggest that she isn’t out of his league in the first place. If anybody benefits from The Big Bang Theory’s brand of anti-intellectualism, in other words, it’s intellectuals themselves. Say what you will about them, they’re a clever bunch.