In praise of that forgotten home entertainment system, the projector. 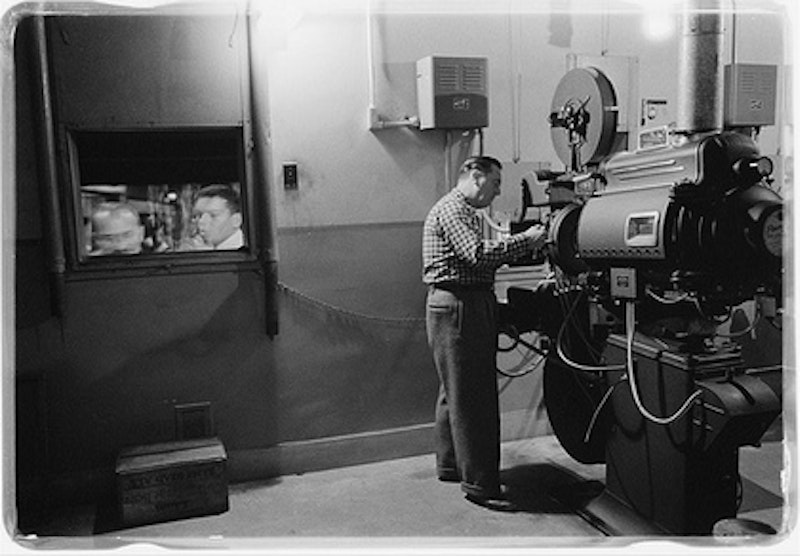 I have no idea why people spend thousands of dollars on a flat screen TVs. Okay, I have some idea: the picture is the clearest and brightest and most colorful in the history of media! I will admit it's pretty cool to watch sports on these things, and I don't even like sports. So a flat screen is nice. But I just got a projector this week, and I have to say: I'm in love. That's right, I'm in love with a machine.

So why am I plugging the projector? Let me explain.

Movie critics and Hollywood alike have been running around like headless chickens fretting the death of the cinema for the past few years. By "the cinema," I mean being in a movie theater and overspending on tickets and popcorn. They have some cause for concern. Adjusted for inflation, only six of the top 50 highest grossing movies in America were made in the last decade. The most successful one after 2000, The Dark Knight, only ranks at 27 (Gone With The Wind, made in 1939, is still number one, with Star Wars not too far behind.)

What's the big deal? Well, first, theater tickets are how movies have always made money—that's Hollywood's problem. On the other hand critics, and some auteur directors like David Lynch, worry that people aren't seeing movies the way they are "supposed" to be seen: B-I-G.

I say, stop worrying. First, Hollywood knows DVD sales and international box office returns are compensating for the slack at the domestic box office. But more importantly, I'd argue people are watching movies how they're "supposed" to be seen (though really, what's so wrong about watching a film on an iPod, David?). Flat screen TVs are decent enough and provide at least some semblance of a cinematic experience, though I still don't get all the hype.

Projectors, to get to my point, are a great way to go. Yes, some of them are just as pricey as flat screens, but not necessarily. I bought mine off a colleague for $350; an additional speaker system cost me $100, because what's the use of a big picture without big sound? For half the price of a smaller flat screen I got an image two or three times the size.

Plus, it hooks up to my laptop. All of a sudden I don't need to blow money on Apple TV. Last week I streamed an episode of Pushing Daisies from ABC.com to my projector and found out the show was surprisingly cinematic, with lots of color and some fun editing. I can download a TV show or movie on iTunes or even stream movies from Hulu.com or Netflix.com, and watch it B-I-G. My movie-viewing options are now much more varied, much more convenient, and much closer to the "real thing." Not a bad deal!

There are some drawbacks, don't get me wrong. Having a projector adds more cords and complicates the viewing process a bit, and the cheaper projectors, like the one I have, doesn't show a clear picture in daylight.

But the gains outweigh the losses. Projected movies, to me, are about escapism. The room is dark and you don't have to think about deadlines and drama. And projectors are more social than flat screens. Projected images are an "event" you do with friends, like going to the movies. A grand, majestic screen you can watch with friends that even makes network TV exciting? My new love is a giver.

A flat screen is just a TV.