Movie memories are everywhere in the city and they’re age specific. 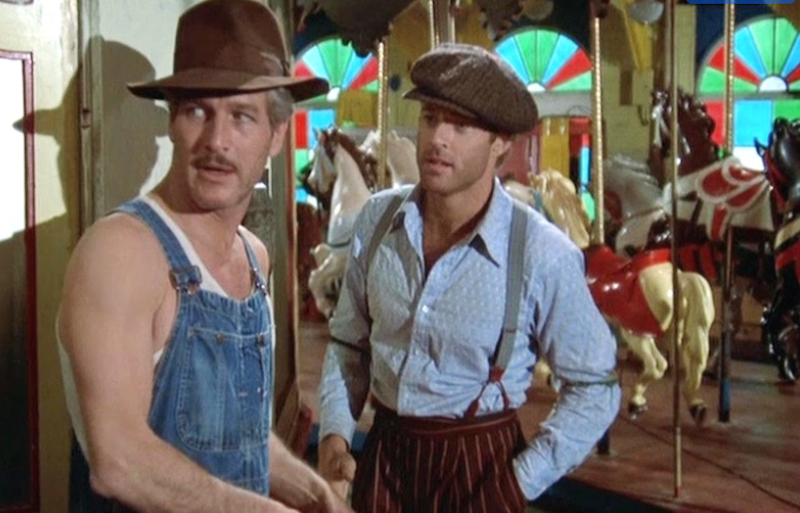 When you’re a classic movie fan and live in Los Angeles, it’s hard not to see the city as one big movie location. Drive over the Sixth Street viaduct downtown and you visualize the car race in Grease or the motorcycle chase in Terminator II. Stop for a drink at The Frolic Room at 6245 Hollywood Boulevard and you think of Kevin Spacey downing whiskey before being murdered by a corrupt cop in L.A. Confidential.

Movie memories are everywhere in the city and they’re age specific. Young filmgoers see the Griffith Park Observatory and think of La La Land; seniors think of the James Dean knife fight in Rebel Without a Cause. Movies preserve an image of an older Los Angeles that no longer exists. In Annie Hall, Woody Allen meets Diane Keaton for “alfalfa sprouts and mashed yeast” at the Source Restaurant (8301 Sunset Boulevard), a famous 1970s health food spot. The site is now Cabo Cantina. In the 1946 film Nocturne, George Raft stops at the legendary Hollywood Brown Derby restaurant on Sunset Boulevard (where the Cobb Salad was allegedly invented). The location’s now an apartment complex. The Beverly Center mall at the corner of La Cienega and Beverly Boulevard was once a small amusement park called Beverly Park. The location appears in Alfred Hitchcock’s Strangers On a Train (1951) when Farley Granger is nearly killed riding an out of control merry-go-round.

Here’s a list of my 10 favorite LA movie locations. These aren’t the most iconic, but they’re personal to me.

10). The Alto Nido Apartments at 1851 North Ivar Street in Hollywood. This is where William Holden’s character Joe Gilles lived as a down-on-his-luck screenwriter in my favorite classic film Sunset Boulevard (1950). In the 1980s, I attended a party in this apartment building. The tenant had just moved from North Carolina to try his luck at screenwriting. He told me, “I feel like I’m living a dream in this place just like William Holden.” I reminded him that Holden died face down in a swimming pool in the film. The guy replied, “Yeah, but what a way to go, right?” The most famous Sunset Boulevard location no longer exists. Norma Desmond’s decaying mansion at the corner of Irving and Wilshire Boulevard stood until 1957. It was torn down to build the Harbor Building, headquarters for the Getty Trust.

9). Crown Pawn Shop at 20933 Roscoe Boulevard in Canoga Park. This is the exterior for the famous pawnshop scene in Pulp Fiction. It’s located in a sleazy strip mall west of De Soto Avenue between a Mexican bakery and a hair salon. This is where Ving Rhames as Marsellus says the legendary movie line, “I’ma get medieval on your ass.” I once considered eating a burrito at La Espiga De Oro Bakery next door but I ruled against it for fear it would get medieval on my ass.

8). The Rosslyn Hotel occupies two buildings at the corner of 5th and Main Street in Downtown Los Angeles. I love this spot because it has the coolest rooftop building sign in the city. The Beau Arts style architecture was popular in the early-20th century. When built in 1923, it was the largest luxury hotel on the west coast. The hotel doubles as a police station in the movie Se7en. This is where murder suspect Kevin Spacey surrenders to detectives played by Morgan Freeman and Brad Pitt. The site is also the center piece for the obscure Wim Wenders film Million Dollar Hotel written by Bono of U2 and starring Mel Gibson. Gibson was so ashamed of the movie he fought to prevent its release in theaters.

In 2010, one of the two buildings was transformed into affordable housing for homeless veterans and low-income people with disabilities. The second building was upgraded to the upscale Rosslyn Loft apartments. You can rent a 209 square foot unit for $726/month.

7). Johnnie’s Coffee Shop at the corner of Wilshire and Fairfax in Miracle Mile. This 1956 Googie-style modernist building was featured in Reservoir Dogs, American History X and City of Angels. For me, it’ll always be the place where the Dude and Walter discuss the provenance of the disembodied Toe with green nail polish in The Big Lebowski. The Dude believes the Toe belongs to the kidnapped Bunny Lebowski. Walter is dubious saying, “You want a toe? I can get you a toe, believe me. There are ways, Dude. You don’t wanna know about it. I’ll get you a toe by this afternoon—with nail polish. These fucking amateurs.”

In 2016, the building became campaign headquarters for presidential candidate Bernie Sanders. It was temporarily renamed Bernie’s Restaurant and covered by Bernie-inspired artwork from local artists. The bowling alley location from The Big Lebowski no longer exists. Hollywood Star Lanes on Santa Monica Boulevard in East Hollywood was torn down in 2002 to make room for an elementary school.

6). Boardner’s bar in Hollywood at 1652 North Cherokee Avenue. This was featured in films like Ed Wood, Hollywood Homicide and Being the Ricardos. In L.A. Confidential, the bar is where the villainous police Captain Smith (James Cromwell) reinstates Bud White (Russell Crowe) giving him his badge and gun back. Boardner’s was built as an Art Deco speakeasy in 1927. It survived prohibition, the Depression and the neighborhood’s downturn. The bar celebrates its cinematic heritage with movie-themed cocktails. There’s “the Blade Runner” (Rye Whiskey, ginger beer and lime juice), “Red Rum” (Bacardi Rum, Campari, pineapple juice, fresh lime grenadine & Angostura bitters) and “the Crying Game” (Mezcal, serrano peppers, agave nectar & fresh lime).

5). Looff Hippodrome Carousel on the Santa Monica Pier. Built in 1916, the Moorish-influenced building was the final creation of legendary carousel builder Charles Looff. The original merry-go-round had wood-carved horses with real horse tails, gold and silver metallic paint and sparkling mirrors and jewels.

The location made its screen debut in The Sting, Best Picture winner in 1974. In the film, this is where con man Henry Gondorff (Paul Newman) hides out from the FBI and operates a carousel with girlfriend Eileen Brennan. It’s also where he meets grifter Johnny Hooker (Robert Redford) and the two make plans to take down crime boss Doyle Lonnegan (Robert Shaw). The Pacific Ocean was replaced in the film by a Chicago skyline thanks to an elaborate matte painting by Oscar-nominated artist Albert Whitlock. The Looff Carousel was restored in 1990 and designated a National Historic Landmark.

4). Olympic Auditorium at 1801 S. Grand Avenue in downtown Los Angeles. This building played a part in three classic movies. Rocky and Raging Bull filmed boxing scenes at the Olympic Auditorium. In The Manchurian Candidate, the Olympic doubled as Madison Square Garden for the famous scene where a brainwashed Korean War veteran (Laurence Harvey) plans to assassinate a presidential candidate. The Olympic was built in 1924 and became a major boxing and wrestling arena. It hosted multiple events at the 1932 Olympics and at the time was the largest sports venue in the country. Charles Bukowski wrote about the Olympic in his book General Tales of Ordinary Madness. “Even the Hollywood boys knew the action was at the Olympic. George Raft came… and all the starlets, hugging those front row seats. The gallery boys went ape and the fighters fought like fighters and the place was blue with cigar smoke, and how we screamed… and threw money and drank our whiskey… you slammed it home, then slept like a drunk angel.”

In the 1970s, the Olympic was home to roller derby and the Los Angeles T-Birds. The 1980s saw the site become a punk rock venue attracting bands like Black Flag, Circle Jerks and Dead Kennedys. In the early-2000s, the Olympic hosted wrestling events with legends like Rowdy Roddy Piper and Andre the Giant. The arena’s last Fight Night was in 2005. It was purchased that year by the Glory Church of Jesus Christ and converted into a Korean Christian Church.

3). El Coyote Cafe at 7312 Beverly Boulevard. The restaurant opened in 1931 and moved to its current location in 1951. In the 1990s, locals nicknamed the eatery “El Canned Foodee” due to alleged incidents of diners getting sick on the food. Food was never the reason to go to El Coyote. It was the cheap margaritas and the kitschy ambiance. A wall near the entrance has autographed photos of vintage celebrities John Wayne and Loretta Young. Another wall’s covered with painted sombreros and Christmas lights left up year-round.

El Coyote plays a role in real movie history. This is where Sharon Tate, Jay Sebring, Wojciech Frykowski and Abigail Folger ate dinner before being murdered later that night by members of the Manson Family. In the film Once Upon a Time in Hollywood, Quentin Tarantino included a scene where Margot Robbie (as Sharon Tate) dines with friends at El Coyote. Tarantino used the exact booth where Tate and friends had their last meal in 1969.

2). 908 S. Broadway in downtown Los Angeles. This 1914 building is situated in the downtown retail district across from the Ace Hotel. In 2012, jewelry designer Tarina Tarantino purchased the building and made it the headquarters and design studio for her fashion empire The Sparkle Factory. This inauspicious location is where the most iconic image in Hollywood history was filmed. Harold Lloyd dangles from the hands of a clock in the 1923 silent film Safety Last. Lloyd performed his own stunts for the film. In actuality, the scene was shot at three different buildings. The start of the climb was filmed at the Blackstone Building on 901 S. Olympic Boulevard. The rooftop scene was shot at the Merchants National Bank Building at 548 S. Spring Street. The Western Costume Building had the most screen time thanks to the breathtaking clock stunt. What made Lloyd’s stunt more amazing was that he had only three fingers on his right hand due to a prop bomb exploding in his hand during a film shoot in 1919.

1). The Bradbury Building at 304 S. Broadway in downtown Los Angeles. This building has the coolest interior in the city with a sky lit atrium and intricate iron staircases, walkways and elevators. It was commissioned in 1893 by the gold-mining baron Lewis Bradbury. The building was the setting for Ridley Scott’s 1982 dystopian masterpiece Blade Runner. In the early-1990s, my friend Lee and I toured the building on a lark. An older German property manager invited us inside. He gave us a tour including a ride on the wrought-iron “bird cage” elevator. Tenants included a local tour agency, a real estate office, a cutlery retail shop (where O.J. Simpson purchased a stiletto involved in his murder trial) and a private detective’s office.

I asked about the small diner on the first floor that was closed. The man summarily opened the cafe and cooked us a heaping breakfast of eggs, Canadian bacon, scalloped potatoes and espresso. He regaled us with tales of the building’s history including its presence in movies like D.O.A. (1950), I, the Jury (1953) and Chinatown (1974). He went on a long dissertation about chiaroscuro and how Ridley Scott mastered the concept of light and shadow in Blade Runner.