Il Divo is the best political mafia movie in years. (Grade: A-) 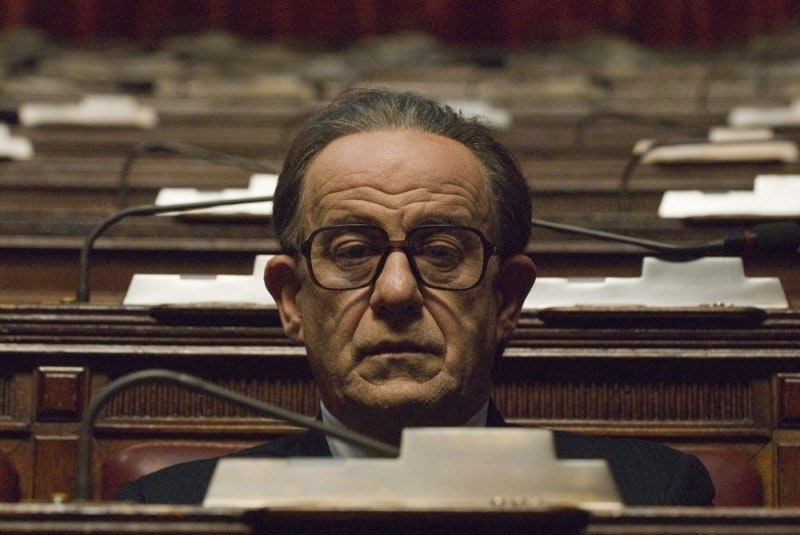 It's a cliché to label directors as sons and daughters of other ones, but it seems appropriate in the case of Paolo Sorrentino, because his films are so concerned with style—lighting, framing, camerawork—and creating a viewing experience that his technique instantly recalls classics. Sorrentino is the celebrated director from Europe you haven't heard of. After you see Il Divo, out this week in only one theater, and I hope with plans for more, you’ll remember his name.

Most people compare his style to that of Martin Scorsese. It's an appropriate comparison. Sorrentino loves to swoop into scenes with a dramatic flourish, zooming into characters' faces clockwise and counterclockwise. His focus on bad men and the mob also begs the comparison to Scorsese and Orson Welles, perhaps also Brian DePalma. All three know how to depict the rage and angst of men whose worlds are filled with chaos, violence and misdeeds. His prior films—including L'uomo in piu (Man on Top), The Family Friend, and Consequences of Love—showcase leading men who have committed a wrong or whose lives are surrounded by despair. Sound dreary? None of them are. One word consistently applied to Sorrentino's work is "stylish." You will never be bored watching his films. He has the gift of Scorsese and Wes Anderson: he’s able to create a film technically sophisticated and wildly entertaining. Sadly, many are not available in US-formatted DVD.

Il Divo is the story of Giulio Andreotti, one of Italy's most notorious politicians who has held numerous top positions in the government, including prime minister, and whose tenacious hold on power and connections to the mob (and high profile deaths and assassinations) make him a figure readymade for the Citizen Kane treatment. Sorrentino has fun with Andreotti, as much fun as can be had with a murderous and power-hungry despot; he films Andreotti's inner circle, mostly political henchmen, in mob movie fashion, using red subtitles to announce their names and nicknames.

But the movie is ultimately serious. Andreotti (Tony Servillo, who has starred in many of Sorrentino films) is stoic, near emotionless throughout. He is banal, like a German SS guard, and, like those guards, evil. Weighed down by years of wrongdoing, Sorrentino—who writes and directs most of his movies—suggests he's grappling with guilt: an opening shot zooms into Andreotti with acupuncture needles in his face. Another memorable scene has Andreotti pacing about his house like a madman, driven to insanity by his crimes.

Andreotti is the apotheosis of Sorrentino's maddening protagonists. In The Family Friend, a loan shark similarly feels enslaved by his crimes—rape and usury chief among them. Not as impenetrable as Andreotti, the loan shark is a monstrous old man—almost literally a hunchback—who we manage to pity for his incredible loneliness and allergy to virtue. In Consequences of Love, Sorrentino brings us a man enslaved by his own trials with the mob who must learn to open his life to other people. We never really "know" these men, but Sorrentino draws us into their stories visually and makes us care, at least, about what happens to them, even if we hope they fail.

Il Divo is infectious; the music is fantastic, diverse and stimulating, the editing sharp. It has a major flaw, but one with a solution: for American audience members new to Andreotti's story, the film can be irritatingly unclear: Sorrentino assumes his audience is generally familiar with main characters and the general story. I had a terrible time following the jumps in time and certain plot details. I strongly suggest anyone planning to see the movie spend 30 minutes with Google and Wikipedia to become familiar with Italian politics and government, Andreotti, his history and his close associates. It is a must.

That said, Il Divo is the most exciting political drama I've seen in years. Inventive and bracing, it is latest installment from one of the best filmmakers working today.