I Love The 80s: The Informers and Adventureland

Was the decade irredeemably crappy, or just endearingly so? (Grades: F-/B+) 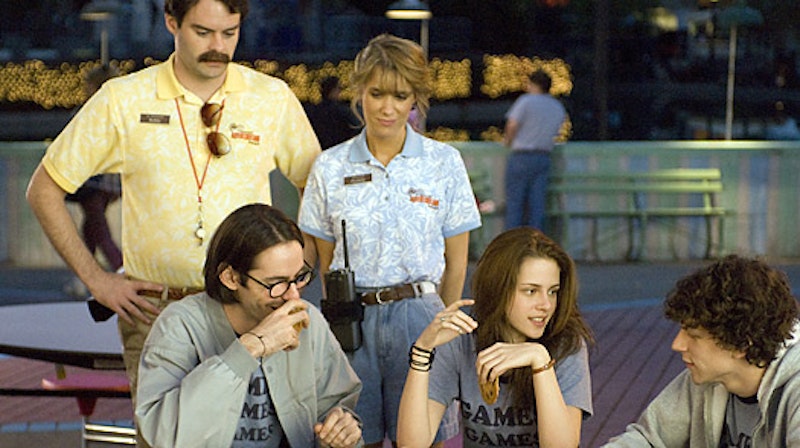 If you decide that seeing The Informers—Gregor Jordan’s film of the Bret Easton Ellis novel, with a script co-written by Ellis himself—is something you’d like to do, I recommend getting a cup of coffee beforehand and going in with your senses wide awake; it’s rare to see a movie so unremittingly terrible, and the experience should be savored.

It will surprise no one to learn that this latest Ellis adaptation concerns the spiritually bankrupt moneyed class in mid-1980s Los Angeles, and that the basic moral of the story is “Life sucks.” Fans of this kind of thing might argue that Ellis somehow indicts the superficiality and gloss of L.A., which couldn’t be further from the truth. The Informers contains nary a decent person or action, which doesn’t stop Jordan from piling on the would-be glamour: endless slow motion shots, plenty of soft-core T&A, expensive liquor, and cheesily soundtracked partying. Everyone’s a miserable, hateful bastard in this film, which is as far as Ellis goes with regard to sociology.

Something about L.A. apparently makes the city an irresistible setting for ensemble-cast marathons of ennui, but to compare The Informers to Short Cuts (one of Jordan’s stated inspirations) isn’t fair to either; Robert Altman’s 1993 Raymond Carver homage is a half-dozen exceptional, insightful movies at once, set to evocative music and guided by one of the greatest American directors of all time. The Informers is four or five insipid, juvenile meditations on hatefulness, set to a self-consciously terrible score and performed by actors whose understandable insouciance to the material is matched only by the inanity of the script itself. Magnolia, Grand Canyon, and Crash all have their pretentious moments, but none can match The Informers for sheer schlock and vulgarity.

Part of that vulgarity is watching the film’s known stars, a fairly talented bunch, waste themselves on such spiteful material. As a checked-out, philandering movie executive, Billy Bob Thornton offers the most convincing case yet for why he doesn’t want to be considered an actor; Kim Basinger plays his ex-wife, in a performance that basically requires her to shiver and cry while taking pills in her room; and in an even less-developed role, Winona Rider plays Thornton’s girlfriend, a newscaster whose life is apparently coming undone for reasons left unsaid—breakdowns just kind of happen to L.A. people, right? Most egregiously, Mickey Rourke brings his surgery- and injury-scarred body to the role of a deadbeat, unrepentant statutory rapist and kidnapper. L.A.’s just a cruel place, we’re meant to see through this non-character; he talks in nonsense metaphors about the desert and thinks nothing of whipping out a switchblade and marching toward the prepubescent boy hogtied in his nephew’s bathroom. His plan to sell this kid to black market thieves fell through, you see, and he reasons that killing the boy would be more humane than leaving him for the bad guys who are coming for the house.

This is the vacuous moral universe that The Informers limns (the children of these monsters also have their own drug problems and horrible “friendships,” and AIDS is just starting to pop up, unbeknownst to these poor souls), without any conceivable point beyond the observation that hateful L.A. glamour-chasers are terrible people with no hope of redemption. Did we really need a movie about that? One where women are punched and children are nearly killed? Where a pussyhound alcoholic dad (Chris Isaak) ruins his son’s vacation by trying to steal his potential girlfriend? Where a womanizing British rock star suffers an uncomfortably stigmata-like injury when he falls on a broken vodka bottle? Ironically, of course, the only people who will want to see this trash are those who still harbor an Ellis-era infatuation with coked-out 80s decadence.

But Ellis is a novelist, too, so hang on for nuggets of writerly genius that only a true talent could churn out: “We’re going to Hawaii. It’s going to be great.” “ ‘I need more sun.’ ‘There is no more sun.’ [Looks pensively into the gray sky.]” “I need someone to tell me what what’s good and what’s bad. How are we supposed to know the difference if nobody tells us these things?” Were The Informers merely ponderous and silly, it would be ignorable and little more; Ellis’ pretension and Jordan’s Cinemax aesthetics make their contempt for their characters even more glaring, however, resulting in one of the most unpleasant films I’ve ever sat through.

Greg Mottola’s newest film Adventureland, on the other hand, is almost pleasant to a fault, but after a blinding amoral disaster like The Informers I can’t fault a filmmaker for being too nice. A thoroughly unsurprising summertime coming-of-age story set in 1987, Adventureland has as many era-specific costuming and music cues as the Ellis film, but they’re all harnessed to an earnest, observational story about a young man growing out of his own insecurities. This kind of thing, when done well, is pretty timeless, and Mottola’s is a good, if slight, example of the genre.

Naturally, there’s a specific audience in mind for a film whose characters bond over a shared love of Big Star, Lou Reed, and Dickens—an audience that one suspects overlaps pretty thoroughly with the general makeup of contemporary movie critics (you had me at the first tear-jerking use of “Pale Blue Eyes,” Mottola), which may explain this film’s relatively excellent reviews compared to last year’s very similar The Wackness. The filmmakers also get credit for enlisting Yo La Tengo to compose the agreeable score, seeing as the group was working through its own early awkward phase in 1987, on its way to being the era-defining indie rock band they’d become in the early 90s.

The actors, most of them rather young, are all game. Jesse Eisenberg, whose stock-in-trade intellectual awkwardness makes Michael Cera seem like Cary Grant, builds ever-so-slightly on the persona he’s built in Roger Dodger and The Squid and the Whale; there are moments of honest-to-god self-assuredness, particularly near the end, and even in his earlier awkward scenes Eisenberg is a genuinely natural actor onscreen. As a Pittsburgh native forced to spend his summer working at the rundown titular theme park instead of traveling through Europe as planned, Eisenberg embodies the character’s small fall from grace with just the right amount of smug entitlement. His overuse of the term “per se” when looking for a menial job—as in, “I don’t have table-waiting experience per se, but here are my academic references”—is just as important a decoration as another character’s teased hair and shoulder pads.

Like The Informers, Adventureland features a panoply of disaffected characters, but their listlessness and minor addictions are played honestly and presented as symptoms of a grander, unifying suburban malaise rather than unconvincing evidence of the Hollywood-enabled Fall of Man. That our professed summer “fun” spots are run by unhappy, anxious young people is one of many unforced social observations that give Adventureland its emotional resonance. Mottola, who also directed the infinitely more crass Superbad, is obviously closer to this material, and, like Noah Baumbach’s Squid and the Whale, the film’s best moments are obviously the most autobiographical. There’s a relaxed honesty in Adventureland’s depictions of after-work drinking and stoned conversation, much more so than the overworked raunch of Superbad, which Mottola didn’t write.

Ryan Reynolds is winningly subdued as the Adventureland maintenance man whose musician mystique, however objectively lame, awes his younger coworkers. Martin Starr, as a Gogol-loving, pipe-smoking park employee, basically picks up with the character he played in Freaks and Geeks, perhaps wizened by college but still crippled by social anxiety. And as Em, the Big Star-loving romantic interest with family problems, Kristen Stewart is believable and complex. Adventureland is well-performed across the board, which is essential for a script that’s an immersive series of character-based set pieces. Neither as prodigious and beautifully shot as Dazed and Confused, nor as emotionally devastating as the adolescent dramas of Todd Solondz, Adventureland suffers only from the nagging sense that nothing much is at stake.

A movie like The Informers, however, is a reminder of what we’re up against in our pop culture landscape. It’s a film that exists only to romanticize reprehensible behavior and bad fashion, whereas Adventureland, fluffy though it may be, at least appeals to something good in its viewers. We’ll never be worse off for taking an hour and 45 minutes to think about the subtle awkwardness of young romance and the role that music plays in it. That may sound like faint praise, but it’s sometimes easy to forget just how valuable a little decency and honesty can be in contemporary moviemaking.

The Informers. Directed by Gregor Jordan. Senator Films, rated R, 97 minutes. Now playing in limited release, which is more than it deserves.