At The Movies No More

What, if anything, does the show's cancelation say about the state of movie criticism? 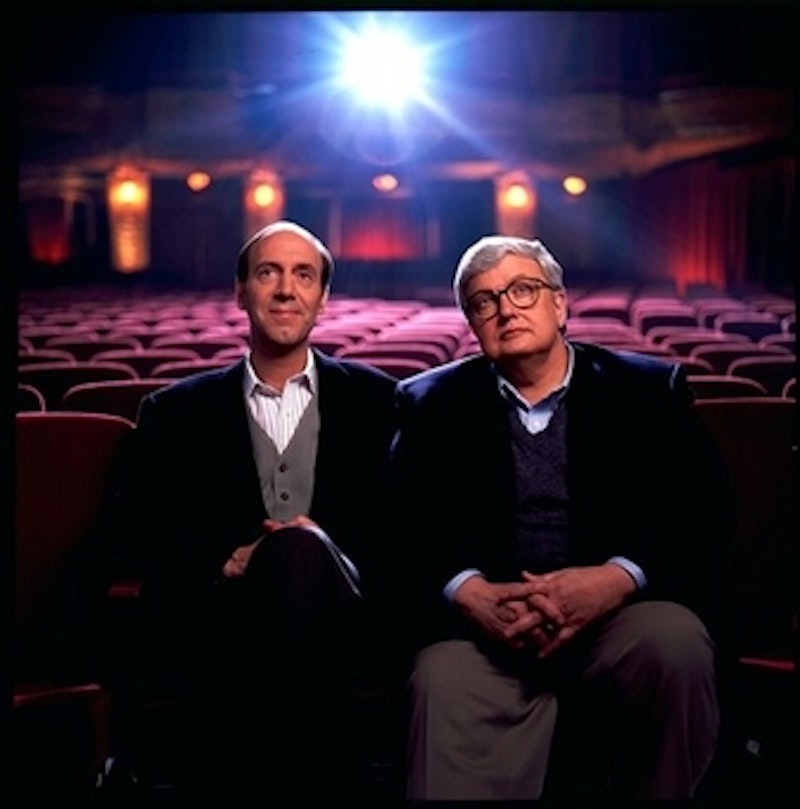 When it was first announced that the syndicated movie review TV show At the Movies would be riding into the sunset (or fading to black, or undergoing the cinematic cliché of your choice), a predictable wave of articles ensued citing the program’s axing as yet more evidence of how sorry the state of American film criticism has become.

After all, over the past couple of years major newspapers have been dropping movie critics faster than theaters dumped Knight and Day. Tenured critics in Chicago, New York, Atlanta, Detroit, Denver, and several other major markets have been shown the door, while Time and Newsweek have severely cut back the weekly word counts for veterans Richard Corliss and David Ansen. Variety received a barrelful of bad ink for getting rid of its longstanding (and long-winded) main critic, Todd McCarthy, and even so-called alternative papers like the Village Voice and the Chicago Reader have consolidated their critical staffs.

The reasons for these moves are, of course, due mainly to the twin specters of modern-day publishing: Dwindling revenues and increased competition from the Internet, cable, and so on. But while At the Movies’ demise is at least in part due to the same factors, the real grim reaper here is the same one that’s harvested everything from I Love Lucy to NYPD Blue: The show simply outlived its usefulness.

It was an amazingly – and, at its best, gratifyingly – long run. Starting in 1975 as a local Chicago show with the unwieldy title Opening Soon at a Theater Near You, the program coalesced into the nationally-shown bi-weekly Sneak Previews in 1977, going weekly in ’79. Remaining constant were hosts Gene Siskel of the Chicago Tribune and Roger Ebert of the Chicago Sun-Times, well-respected in the critical community, if far from household names to most of the nation.

The give-and-take between the pair was what gave the show its oomph: Here were two men being paid by competing papers to pen thoughtful insights into a given title’s merits or lack of same, doing so not in a lecturing fashion, as one imagines a Pauline Kael probably would, but rather in a way designed to engage the viewer. While usually similar in their tastes, they could get into marked disagreements, though the “sez you” shtick was often reserved for their talk-show appearances.

One of their more famous disagreements came over Blue Velvet. There’s no animosity at play here, or an over-eagerness for one to get his point heard over the other’s; instead, there’s a reasonable exchange of viewpoints from two men who have clearly thought long and hard about what they’ve seen, and what their viewers might expect:

Sometimes either Siskel or Ebert could seem to have gone off the rails, as with Ebert’s defense of the mercifully forgotten Cop and a Half (to which Siskel snarked, “Wow, where’s your big red suit and beard, Santa?”) or Siskel’s admitting that, hey, he kinda liked the goofy Halloween III: Season of the Witch (an opinion I share, by the way).

As their influence grew, Siskel and Ebert used their bully pulpit for good (championing the likes of My Dinner with Andre and Hoop Dreams when no one outside of festival audiences had even heard of them) and ill (a relentless campaign for an alternative to the “X” rating that backfired when the new “NC-17” proved to be just as poisonous to box office prospects). There was also, of course, the canonization of “Two Thumbs Up!” which always made me wonder, “Yes, but up where?”
It was with Siskel’s passing in 1999 that At the Movies lost its mojo and by all rights should have folded. Of course, ratings and income for the show’s owner Disney were at the time such that simply bowing out was never going to be a serious consideration, so the program tried out various pairings with Ebert (Harry Knowles or Joyce Kulhawik, anyone?) before deciding that the best possible replacement was Ebert’s junior Sun-Times colleague Richard Roeper.

A columnist by trade, Roeper clearly did not have Ebert’s background and rarely challenged his more august co-worker’s opinions. The pairing simply threw into greater relief Ebert’s growing reputation as America’s foremost movie critic, one no longer tied to Siskel’s name in movie ads who could start churning out book after book with ridiculously overinflated titles (three volumes so far of The Great Movies (as adjudged by guess who?) and Scorsese by Ebert, which will never displace Hitchcock/Truffaut on the serious film student’s bookshelf.

When Ebert himself was felled by cancer in the mid-00s, the spectacle of Roeper being paired with sometimes ropey choices of guest hosts (Kevin Smith or Aisha Tyler, anyone?) proved that the show had absolutely lost its way. Eventually Roeper left as well, replaced by Ben Mankiewicz and Ben “I Am Legend is one of the greatest movies ever made” Lyons, who in turn were replaced by the more serious, though hardly charismatic, Michael Phillips and A.O. Scott.

Bringing an end to bad (the two Bens) or at least mediocre (Phillips/Scott) television is no cause for sorrow, and is hardly indicative of The Death of Movie Criticism As We Know It. After all, we’ll always have the likes of Entertainment Weekly and its letter grades (a rip-off of the “thumbs up/down” system), and, from a visual stance, programs like ESPN’s Pardon the Interruption, where two longtime co-workers at a metropolitan daily paper trade barbs.

No, the best way to remember At the Movies is as a showcase for a couple of guys from the Midwest who may – or may not – have liked each other all that much. For them, the balcony has long been closed.