FILM REVIEW: Where in the World is Osama bin Laden?

This is why they hate us. 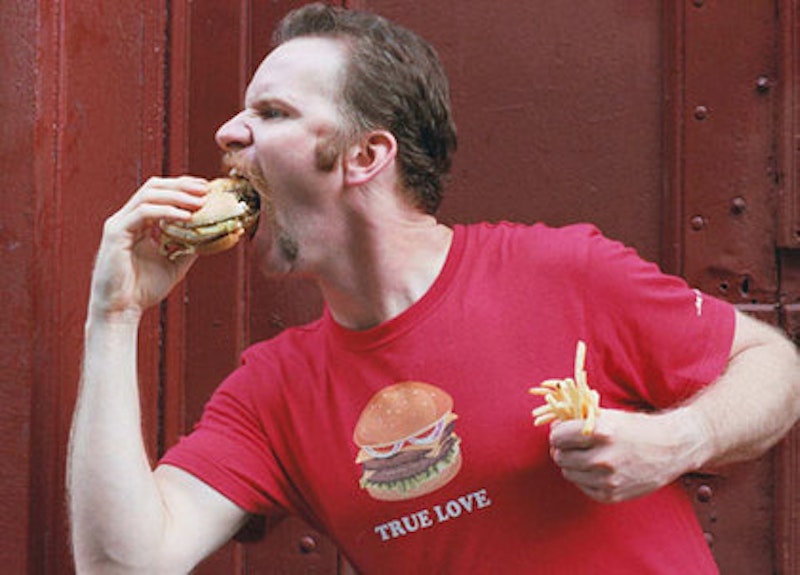 Image copyright Odeon Films. Still from Where in the World is Osama bin Laden, below, by Daniel Marracino. Courtesy of the Weinstein Company.

Morgan Spurlock made the affable documentary Super Size Me in 2004, and that movie’s enjoyable (and ultimately successful) indictment of the fast food industry distracted viewers from that fact that Spurlock himself traffics in a fast-food version of documentary journalism. Yes, the movie was about the way America eats, but it was really the one-man Morgan Spurlock Show—a situation made clearer when he actually produced and starred in a TV series, 30 Days, in the wake of Super Size Me’s success. He riffed, he talked to the camera, he cracked jokes, and he proved his point through a big stunt: eating nothing but McDonald’s for a month. That movie worked because its point and its medium were totally in sync—what better way to show the horrifying effects of fast food than to use one man’s body as a testing site?

Of the countless flaws in Spurlock’s new “documentary,” Where in the World is Osama bin Laden?, the disparity between point and medium is perhaps the most glaring. Here, the stand-in for Big Hamburger companies is… the War on Terror. As in, the entire post-9/11 state of affairs between the Middle East and the United States, as well as the political relationships that informed those over the last 50 or so years. If this strikes you as a lot for one non-expert to cover in a couple hours, you’re right. And if you’re not prepared to hear the foreign affairs lectures and hypotheses of a man whose greatest claim to fame is gaining 30 pounds on camera, you may want to skip this imbecilic pageant altogether.

It opens as Spurlock’s wife becomes pregnant, and he, like any parent, freaks out about the safety of the world and his child’s place in it. The list of possible concerns (murderers, rapists, diseases, etc.) keeps spiraling until he gets to terrorism, and by extension, the leader of al Qaeda. Thus is the rationale behind Spurlock’s ensuing 20-week quest to find bin Laden and presumably kill him, because, “If I’ve learned anything from big-budget action movies, it’s that complicated global problems are best solved by one lonely guy.”

To reiterate: Morgan Spurlock, still rocking his trademark handlebar mustache and indefatigable shit-eating grin, decided that the best way to baby-proof the western world was to go on a one-man (plus cameraman, plus translator) “search” for the world’s most wanted terrorist, all while leaving his pregnant wife at home alone. Or, to give him the benefit of the doubt, he decided to frame this absurd publicity stunt around some footage of his wife’s prenatal period and then use their separation to add some private drama to his mediocre and unfunny film. Either option is dubious and reveals that Spurlock’s self-importance bests even that of his obvious influence, Michael Moore.

It’s never made clear to what extent Spurlock considers his mission to be tongue-in-cheek. One would have to assume it is, if only to prevent thinking that Spurlock is the dumbest man alive. Yet he told Deborah Solomon in the April 6 New York Times Magazine, “[A]nybody who buys a lottery ticket doesn’t buy one saying, ‘I am not going to win.’” So in addition to having pitiful grammar, Spurlock did indeed hold out hope that his arsenal of instructional cartoons, rapid-fire editing, and antic mugging could achieve what the U.S. military has been unable to do for the last six years. More accurately, Spurlock uses this five-month journey to right the wrongs of the U.S.’s military action in the Middle East—to get on the street, meet some people, and arrive 90 minutes later with some Oprah-like platitudes about how the media feeds us barbaric depictions of Arab people when they’re really just like us.

He continually shoots himself in the foot, however, by traipsing through Egypt, Morocco, Afghanistan, Israel, Saudi Arabia, and Pakistan as a virtual embodiment of Ugly American tourist behaviors. See Spurlock, dressed in flowing white robe and headdress, walking through a Saudi Arabian shopping mall and asking groups of burka-covered women if they’d like to talk in front of an American camera. See Spurlock, responding to an intelligent Egyptian man’s somber claim that even a phone can be used to kill people nowadays, saying, “And sometimes my phone kills my bank account, too!” See Spurlock, editing in the cheapest action movie music imaginable over a scene where Israeli police inspect a possible bomb in Tel Aviv, then seconds later showing himself walking along the street with the bomb-diffusing robot, saying, “Good work, pal.” And of course he adds R2D2 sound effects for the robot’s response.

The litany of Spurlock’s cultural and journalistic indiscretions is nearly endless, but that last one sums up the general problem: he feigns compassion and interest and solemnity at every turn, but he’s nothing more than a privileged American boob who equates grim nodding with earnestness and pop-culture references with comedy. Right after the Star Wars homage, a group of rabbis gather around Spurlock and his crew to call him scum and howl for his immediate removal from the gate of their temple. And how could they not? This man makes a mockery of attempted cultural understanding by turning downtown Tel Aviv into his own private television studio. As if to prove the point, his only response to the rabbis’ call is an address to the camera: “Dude, this is messed up.”

He’s right, but not in the way he thinks. A wealthy American running around the Middle East turning poor peoples’ lives into a bad, self-serving “documentary” is indeed messed up, dude. Spurlock does not speak Arabic and instead brought a translator with him on the journey; that’s no crime, but Where in the World is intentionally edited to make it seem as if he conversed freely with locals, even sometimes through long shots with the translator nowhere in sight. The frequent cartoon depictions of historical information—really no more than crudely animated Wikipedia entries—bow to the offensive idea that Americans can only understand history if it’s presented like South Park, just as every move to a different country is preceded by a digital sequence made to resemble a video game.

Here’s a moment of unbridled buffoonery that deserves its own paragraph: While visiting an American military base in Afghanistan, Spurlock is granted permission to go and talk to some local Afghanis and ask hard-hitting questions like, “What do you think of al-Qaeda?” He then walks through a recently bombed schoolhouse, shaking his head in confusion and wondering, through voiceover, how families find the strength to live in a place where the threat of instant death looms large at all times—and of course prefaces it with, “As a parent…” But on the same stop, he tries to get a few laughs out of asking the Army officials if he can try out some weapons. So he takes target practice with machine guns and then fires a rocket launcher into an empty mountain range. His response? A surfer-worthy “That was awesome.”

My only thought while watching this whole disgusting sequence was the hope that no non-Americans will ever see this film. It is an embarrassing salad of the world’s worst misconceptions of us, and our ambassador-clown Spurlock should be ashamed of himself. He claims by movie’s end to have bridged cultural gaps, which apparently means enjoying some nice dinners in various homes throughout the Middle East (before returning to his hotel room, of course). But throughout Where in the World, it’s painfully clear how deep the gulf between Spurlock and the Arab world is; at no point in his “mission” does he appear sincere or appreciative of his interviewees’ lives. He repeatedly asks the question, “Do you know where we can find Osama?” and repeatedly receives bemused, dismissive responses. People in every country speak earnestly and passionately about al Qaeda and the conflict with the West, but Spurlock is relentless in his dishonesty and inappropriateness. At one point he talks to a sad-looking Saudi Arabian boy and asks if he wants to come help him find Osama bin Laden. “No,” the boy says, stone-faced, “I would miss my family.” “Yeah,” Spurlock responds, “I miss my family here, too.”

Which brings us to the most confusing and wrongheaded aspect of this film: If we are to believe the editors’ wishes, Spurlock left his pregnant wife alone in New York to go traveling around some of the “world’s most dangerous places” (as we’re told often) in pursuit of a knowingly impossible and silly goal. There are scenes when he’s on the phone with her—there’s a camera crew in New York, too, just to get her side of things—and he’s nearly in tears from the separation anxiety. Are we meant to sympathize with a man who is so transparent in his manipulation? Are we supposed to feel anything but the deepest pity for this woman who’s married to such an inconceivable ass? As the trip moves on and Mrs. Spurlock edges closer to labor, we’re given an indication of exactly how fictional this whole mess is: Spurlock, again shot as if he were alone in the desert, reaches a random “No Tourists” sign along the Pakistan border and pauses thoughtfully, only to shake his head and walk away. “It isn’t worth it,” he says in reference to the possibility of his death when he’s got a pregnant wife at home. Would that this woefully obvious sentiment had occurred to him five months earlier—he could have prevented this insulting film from ever being made.

Where in the World is Osama bin Laden? isn’t funny, it isn’t informative, and it supports the unfortunately widespread opinion that Americans care only about themselves. It shows a privileged, smirking New Yorker parading through the Middle East with only false sympathy for the very real plight of people whose lives are defined by war and hunger. For Muslim men and women in this part of the world, Osama bin Laden is an emblem of a much greater struggle than a lazy documentary can show. It degrades the suffering of millions to film yourself leaning into a cave and saying, “Yoo-hoo…Osaaaamaaaa?” And it is reprehensible to then intercut this area’s tragic reality with depictions of your own self-imposed family “difficulties,” as if they even compared. Whatever good will Morgan Spurlock accrued through Super Size Me has been squandered here, with his creation of perhaps the most inane commentary on our current war yet seen. This isn’t even fast food journalism, because even a Big Mac has some nutrients. This is trash, through and through.

Where in the World is Osama bin Laden? is out in limited release on April 18. Directed by Morgan Spurlock. 93 min. Rated PG-13 for some strong language.