The recent Oscar winner for Best Foreign Film is a tight, unpretentious character drama that doesn’t rely on its concentration camp setting for profundity. 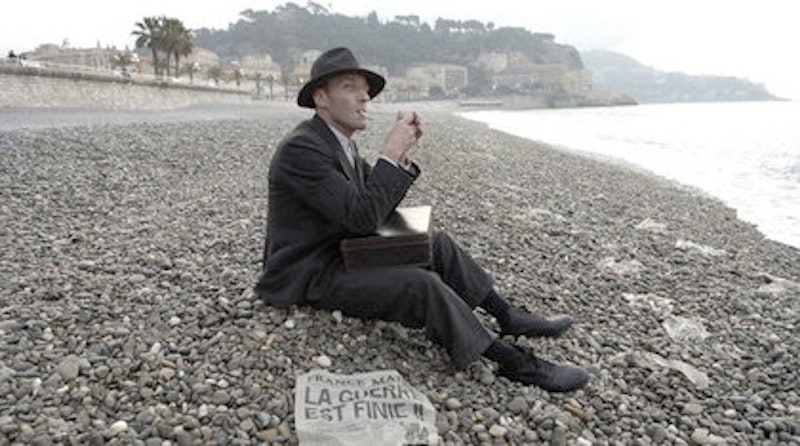 A “Holocaust movie” in setting only, The Counterfeiters succeeds because of its relatively modest aims. It would take a movie of extraordinary philosophical and artistic depth to add anything new to the popular understanding of the Shoah, as well as a director of unique vision. The Counterfeiters is not that film, and Stefan Ruzowitsky is not that director, but he does the smart thing and leaves the film to its three lead actors. They carry it ably.

The protagonist is Salomon Sorowitsch (Karl Markowicz), a master currency forger and German Jew. The film opens in Monte Carlo after the war, as Sorowitsch arrives to a hotel with a briefcase full of American money. He has a haircut, buys a new suit, and starts gambling—the picture of postwar success. He’s quickly back in his room with an elegant woman after catching her eye across the blackjack table, but their intimacy is interrupted when she notices the numbers tattooed on his arm.

Cue flashback, where Sorowitsch is living large off his own false currency in 1936 Berlin. Champagne corks fly, unsubtle anti-Semitism is accepted as the norm, and Sorowitsch beds another beauty in the squalor of his bedroom-cum-forgery lab. But in 1939 (the pre-war portions of the film all seem a little too hurried), he wakes to the Berlin police breaking open the door and is soon chained to other prisoners walking towards a concentration camp.

The SS officers at this first camp soon recognize Sorowitsch’s artistic talent and use him to paint heroic portraits. Before long, the Nazis realize that they could better exploit his gifts at the Sachsenhausen camp, where a mission called Operation Bernhard is underway to flood the British economy with fake pounds. There, Sorowitsch meets the typographer Adolf Burger (August Diehl), upon whose memoirs the film is based. Burger’s wife is still in Auschwitz, and we learn that the two used to print anti-Nazi fliers before being sent there. Burger is vehemently opposed to helping the Nazi cause by printing the forged pounds, and once the task switches to faking dollars, he starts sabotaging the process.

About 20 men work with Burger and Sorowitsch, however, and the former’s refusal to help the Reich is not greeted as a heroic gesture. Instead, the other prisoners, many of whom have experienced unspeakable tragedy in the war, view him as a traitor. So the moral quandary is set, and The Counterfeiters becomes a story about conflicting loyalties—as the leader of the workers, does Sorowitsch owe allegiance to his closest allies or to the greater good? As audience members in 2008, we can see clearly that Burger is the truly moral one here, but Ruzowitsky (who also wrote the script) immerses us in the daily routines and relationships of these men so that we can’t possibly fault Sorowitsch for his own personal code. His concerns extend only as far as self-interest and brotherly solidarity, but after watching the men scrounge for food and share barracks in Sachsenhausen, they seem perfectly legitimate.

As Sorowitsch, Karl Markovicz gives a perfectly balanced performance. He essentially plays three roles—before, during, and after the war—and each is a believable progression from the last. His basic stoicism never falters, but his caddish immodesty is blunted immediately when the police come to his door. August Diehl’s performance as Burger is just as intense. His shoulders are hunched and weary-looking, but his eyes are angry; when news of his wife’s death arrives, he only says in bemusement, “I thought I would cry,” and the effect is devastating.

The third point in the film’s morality triangle is Sturmbannführer Friedrich Herzog, played by David Striesow. Originally the police officer who busts Sorowitsch in Berlin, he rises through the Nazi ranks until he’s the one directing Operation Bernhard. This task essentially amounts to threatening the prisoners who do the actual work, although Herzog himself is only half-heartedly committed to the Nazi cause. He insists that he only does the work he’s assigned, another pitiful claim that a modern audience is programmed to shrug off. But The Counterfeiters, like any decent contemporary work of art about the Holocaust, acknowledges that this kind of “Who, me?” rationalization was part and parcel with the conflict. Only in retrospect can we dismiss the words of Herzog and Sorowitsch, who placed self-interest above the ethics of their respective situations. By making these characters feel totally real, Ruzowitsky and his cast have constructed a movie about morality that doesn’t feel preachy.

The Counterfeiters is playing in New York and Los Angeles, and will soon open in wider release. Rated R, 98 minutes.