Lorna's Silence is affecting, tense, and monochromatic. (Grade: B) 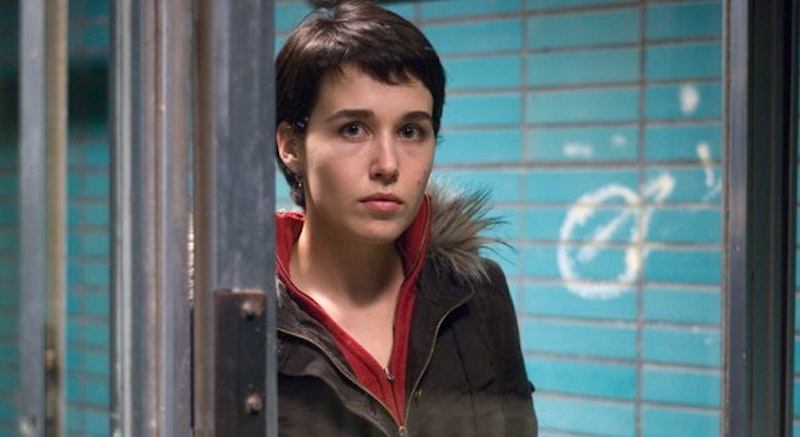 The new female-centered melodrama by the Belgian sibling directors Jean-Pierre and Luc Dardenne never falls prey to the unbreaking misery that has ruined a number of similar recent movies—chief among them 4 Weeks, 3 Months, and 2 Days, Free Zone, The Piano Teacher, and Frozen River—but Lorna's Silence also never reaches the emotional depth and dramatic tension of the genre's classic films. Fellini's Nights of Cabiria and La Strada are no less tragic just because their heroines smile occasionally and exist within a vibrant social patchwork, and the ending of de Sica's Two Women registers viscerally even though the director offers us many beautiful outdoor shots of the Italian countryside. So why do the Dardennes focus our gaze on only drab interiors and heroin withdrawal, sexual threats and bleak long takes?

Arta Dobroshi plays Lorna, an Albanian woman who married a Belgian junkie (Jérémie Renier, doing a more intense variant of his similar role in last year's overlooked In Bruges) to obtain citizenship and who, at the film's outset, is arranging to serve as the fake wife of a Russian mobster. She also has dreams of opening a little Brussels snack bar with her boyfriend, which explains the lengths she's apparently willing to go for money. As in their superior 2002 film The Son, the Dardennes construct Lorna's Silence around a number of just-so plot developments, then attempt to undercut this tidiness with their nearly verite style—they eschew music and tripods, and dole out their characters' background information methodically and non-linearly. For some, this equates to "realism," but to my mind, it's as contrived an aesthetic as any, and serves mainly to present these films as more clever than they actually are. The strengths of Lorna's Silence and particularly of The Son are not in their narrative construction or their allegiance to life's rhythms. Instead, these movies are most impressive in their small moments, the glances between characters and the looks they give themselves in the mirror.

The new film has fewer of these quiet revelations, in part because it's about the relationships between characters rather than the characters themselves. The "silence" in the title refers to the Lorna's potential compliance with the gangsters' plans to kill her addict husband. She has no love for this man but has grown emotionally connected to him. So she's stuck balancing allegiances—to the criminals who helped her gain citizenship, to the boyfriend whose dreams are supposedly entwined with hers, and to the fake husband who requires more intimacy and care than she agreed to give. The Dardennes ably avoid clichés, and refuse to paint Lorna or any of the lesser characters in black and white. But they also never allow these people to breathe; they all have jobs and worries and mannerisms, but their lives seem somehow reduced by the script's needs. They are the exact opposites of Mike Leigh's characters, in films like Grown-Ups or Secrets & Lies, whose problems are decidedly less pressing than their Dardenne counterparts but who nevertheless feel far more "real." I always end Leigh's films expecting to see his characters later, but Lorna's Silence leaves only intellectual residue.

And truth be told, that's not even necessarily a criticism. I'm all for a thoughtful, serious film that deals, as Lorna's Silence does, with the difficulties of personal interaction in an immigrant-heavy society. But I also wish that such a film wasn't as boring as Lorna's Silence occasionally is. The aim of the Dardenne aesthetic is obviously some kind of truth-to-life, yet the very tools they use in its service—the quiet soundtrack, the pseudo-documentary camerawork, the pressing moral difficulties—have the opposite effect on me, and feel less lifelike than the more classically cinematic gestures in the Fellini and de Sica progenitors I mentioned above, or even Altman's equivalent film, 3 Women. In those movies, and to only a slightly lesser extent in The Son, the "realism" is a function of human behavior more than any visual resemblance to actual life. In their own humorless way, the Dardennes illuminate behavior too, I just find myself wondering why none of their characters listen to music or take a relaxing walk every now and again. Even the miserable among us indulge such pleasures.