A Couple Movies to Fight Over

When in doubt, go to a challenging movie over an easily graspable one. 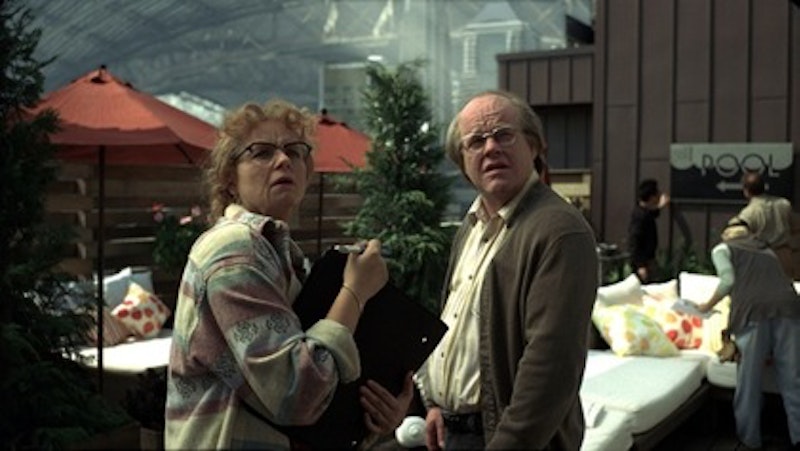 Sometimes I think the best movies are the most challenging. Sure, a nice Hollywood blockbuster is satisfying, but the movies that stick are the ones that leave me confused, angry or upset. Movies that have left me dumbfounded in the past? From My Dinner with Andre, which is just a 90-minute conversation, to Jacques Tati's Play Time, which has almost no dialogue and no close-ups, there are some movies that either makes you throw something at the screen or take an aspirin to calm you down.

These days, tough movies are few and far between, but there are some easy ways to spot them.

First, look at the reviews. If a movie has truly mixed reviews, you've a got a winner. I'm talking about when a few critics call it the worst movie ever made and a few call it brilliant. Lucky for you, there is one such movie out right now: Synecdoche, New York. Charlie Kaufman is the go-to guy for mindfucks right now, so this is no surprise. Most films have mixed reviews, but sometimes the contrast between those who love and hate it is so stark you have to get yourself to a theater to find out what all the fuss is about.

Of Synecdoche, Manohla Dargis at The New York Times said: "To say that Charlie Kaufman's Synecdoche, New York is one of the best films of the year or even one closest to my heart is such a pathetic response to its soaring ambition that I might as well pack it in right now." Wow, what an endorsement! But The New Yorker’s Anthony Lane—one of my favorite critics—said, instead, that, "there has long been a strain of sorry lassitude in Kaufman's work, and here it sickens into the morbid...In short, what is Synecdoche, New York about?"

The problem with Synecdoche is that you need to think of Jean Baudrillard to know what it's about. If you miss this—that the film is actually about debunking the postmodernist impulse to focus on representations, simulacra and how nothing is real—then you're lost. It's so obscure. I love it!

Other recent movies like this have been, Miracle at St. Anna, Cloverfield, Southland Tales, Across the Universe, The Matrix Revolutions, Magnolia, Youth Without Youth. These are movies, saddled by high ambitions and too many ideas that people fight over them. What could be more fun?

The second thing to look for is more obvious: the director and screenwriter. Plenty of directors and screenwriters give themselves the license to be ridiculous and overwrought, and their movies are what I want to see. Seeing a film by the late Stanley Kubrick, for example, would almost guarantee you something to talk about, and more recently Terry Gilliam and Paul Thomas Anderson have been satisfyingly challenging.

I would argue that a movie opening in limited release this week, A Christmas Tale by French director Arnaud Desplechin, which I saw at this year's New York Film Festival, might qualify. I say this because Desplechin provoked me a bit with his Kings and Queen, about a woman who is beautiful but soulless—well, maybe not soulless, but just self-centered, it's complicated.

I thought A Christmas Tale would be a lovely French family story, complete with cute dinners, scintillating conversation and storybook townhouses. It turned out to be much more complex. Desplechin really makes his audience question what binds families and friends together. The movie jumps from character to character, showing their grudges and anxieties, so much so you wonder if anyone is happy or sane. The eldest daughter, played by Anne Consigny, is the most maddening. She's angry and bitter for most of the film and we have no idea why.

It was difficult to watch, but I loved every moment.