We are not who we're friends with. 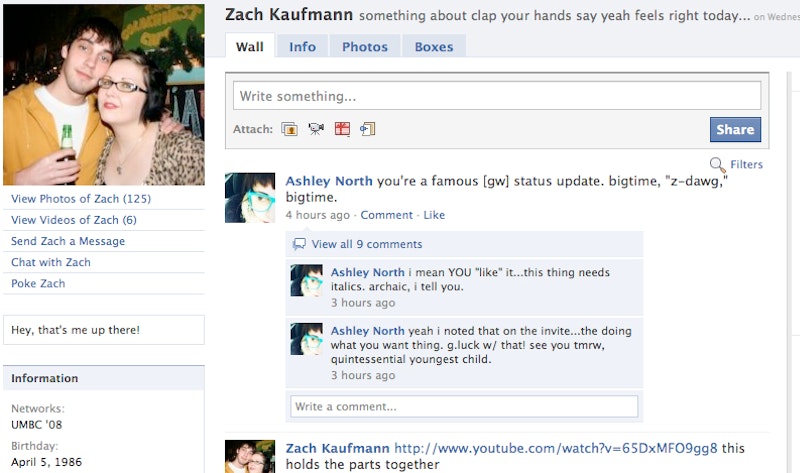 It's April 2, 2010 and I currently have 539 friends. That's what Facebook says, anyway. I click on my profile and in the little box on the left-hand side the six random friends that show up out of the 539: a girl I was pretty good friends with in college (and then not at all after); two people I casually know from around Baltimore; a cousin I've probably said 14 words to in my whole life; a guy from some band I interviewed once; and a girl who I'm pretty sure I've never met. This is sadly representative of the 539 as a whole. With the possible exception of one of those Baltimore acquaintances, I don't think I'd call any of these people friends. Three of them I'd actually prefer to never see again. And one of them I wouldn't recognize if I did. And yet, to delete any of these people would be rude. I'd no doubt show up in their Suggested Friends box, and they'd spend the whole day feeling confused about why a guy they met a couple of times a few years ago would go to the trouble of deleting them. I'd feel bad. And maybe they'd re-add me, thinking it must have been a mistake, and I'd feel worse. This makes for bizarre interpersonal politics.

I mention all this because I'm having a party. On Monday I turn 24, which means on Saturday I'm getting shitfaced. And since Facebook is the only way to invite anyone to anything anymore, I made an event. There's nothing quite like making a Facebook event to remind you just how many people you once knew who you would now feel uncomfortable even being in the same room with. For example, let's say I'm Facebook friends with 100 people from my high school (100 is a guess, but probably a pretty accurate one). About 75 of those 100 I haven't seen or talked to in the six years since I graduated. Of the other 25 I actively keep in touch with ... two. Which means there's 98 people, just from my high school, who I'm Facebook friends with, who I have absolutely no interest in ever talking to again.

On the other hand, I have Facebook friends who are exclusively Facebook friends. I've never met them, and I may never meet them (at least I'm not actively trying to meet them, with the exception of one incredibly cute MICA girl). Which isn't altogether that weird since it's really just a 2.0 version of a pen-pal and having internet friends isn't the mark of being a complete loser the way it once was, though it's a little weirder when you consider that most of these people actually live in Baltimore, a couple of them probably only a mile or two from my house. At some point I added someone I didn't know, a friend of a friend most likely (because I'm weird like that and often drunk), and they accepted (because pretty much everyone accepts whether they know the person or not).

Maybe you're kind of bored right now and thinking, "Dude, it's just Facebook, relax," but hear me out on this because what strikes me as particularly odd about this scenario (this "Facebook friends you've never actually met versus Facebook friends you were at some point real life friends with") is that while it is no way weird to Facebook Chat (as in, literally, with the chat thing) with these exclusively Facebook friends, it would be completely awkward and inappropriate and just plain "Not Something You Do" if I were to Facebook Chat with some guy I was friends with when he lived in my dorm sophomore year of college. Everyone knows, when it comes to a guy like that, if you're gonna talk to him at all, you write on his wall.

I remember reading an article a couple years ago about an older guy who used Facebook pretty much only for business purposes and so really only knew his Facebook friends in a professional capacity. He decided to make an event and invite them all out to a local bar and despite getting a couple dozen confirmed guests, was shocked that only one or two people actually showed up—shocked at least until a friend informed him of the unspoken rule of Facebook events: Confirmed means maybe, Maybe Attending means almost certainly no, Not Attending means definitely no but at least I'll bother to make up an excuse, and Not Yet Responded means I probably didn't even care enough to look at the event. Which gives me an idea (an idea I may one day be bored enough to actually play out): if I decided to have a party where I only invited Facebook friends who no longer qualify as friends at all (people like that guy from my dorm sophmore year), how many of them would show up, and how much would I regret the shit out of it?