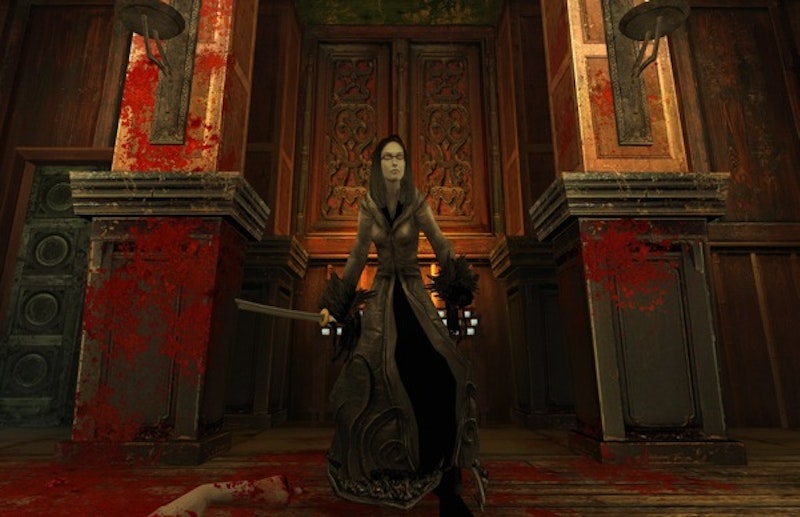 Given that the final months at Troika Games involved lengthy spells of work in the dark hours, the continual need for (financial) sustenance and a whiff of tragedy, it's appropriate that their last release was Vampire: The Masquerade - Bloodlines. To say this action-RPG release was "troubled" would be akin to suggesting said vampires "have been known to enjoy the odd mouthful of blood." Troika had acquired two licenses-White Wolf's World of Darkness role playing universe and an early version of Valve's Source 3D graphics engine (most famously used for Half-Life 2.) Both would cause problems.

Having to run plot details past White Wolf simply added to the delays which blighted the development, but it was the use of the Source engine that would prove the more significant issue. This early version of the engine was poorly optimised (resulting in slow, chuggy sections on even the most powerful PCs of the day) and required Troika to write their own Artificial Intelligence routines, protracting the development time still further.

In an interview with The Escapist, Troika founder Jason Anderson gave an idea of the horrendous hours being worked during much of the games production: "It might be better to think of development in terms of non-crunch time. Arcanum [a previous Troika release] had about a year of non-crunch time and Vampire about one or two months. I am not kidding." After three gruelling years, Bloodlines was eventually released on exactly the same day as Half-Life 2, Nov. 16, 2004. It was a technologically demanding title, based on a near-impenetrable role-playing game about vampire politics, full of niggling and even game-breaking bugs. It was directly competing with the sequel to one of the most critically acclaimed PC first-person shooters of all time. Predictably, sales were disastrous. Three months later, Troika Games closed their doors.

Yet this unfortunate story has something approaching a happy ending. A convergence of factors means that today, almost five years on from release, Bloodlines can emerge from the tomb more powerful than ever. Modern PC gaming rigs have the power to run the prototype Source engine without many of the problems encountered by players in 2004. Elsewhere, the growth of digital distribution networks like Steam and GamersGate mean the title is still available to purchase and download (often at a bargain price), where people would previously have needed to search in second hand bins or, the online equivalent, eBay.

And what of the bugs? They have mostly been eradicated. Dedicated fans have released multiple "unofficial" patches (the latest being 6.4, issued in July of this year), which have tidied up problems, restored missing dialogue options and made the game a more stable experience. Somewhat more contentious has been the decision to mess around with the location and names of objects, as well as other tweaks to "balance" game play-but these changes can largely be avoided by selecting the "basic" version of the patch during installation.

Despite its difficult delivery, reviewers were able to recognise the terrific potential trying to make itself known beneath an unpleasant membrane of technical problems. In its revitalised form, Bloodlines is one of the best single player experiences the PC can offer.

The level of ambition behind the title is astonishing, even five years on. The ability to slow down time and dance around bullets, Matrix-style (introduced by Max Payne in 2001) is just one special vampire discipline out of 11, spread between seven unique vampire "clans." While all of this tabletop RPG stuff sounds quite daunting, Bloodlines is careful to introduce the main facets of vampiredom (relieving people of their blood, having wacky powers, being a badass) through the teachings of a character named Smiling Jack-voiced by John DiMaggio.

From the moment your character sinks their fangs into a hapless victim, the seedy, nighttime existence as a vampire in contemporary L.A. closes in. Guns, strip clubs and charming houses furnished with human skin are just some of the delights. Level design is mostly superb (a memorable Haunted Hotel sequence regularly pops up in "terrifying moments in gaming" lists, alongside the orphanage/asylum mission from Thief: Deadly Shadows), while the writing deftly balances portentous atmospherics with a self-awareness of how ridiculous this whole vampire business really is. After a particularly scholarly monologue about vampire lore has been delivered by a stuffy wizard, a dialogue response along the lines of "gee, thanks for the lesson, DAD" is offered. Characters who could have easily spilled into horrible, clunking cliché, such as the lascivious Jeanette, are handled with intelligence unusual to videogame writing. Other throwaway moments, like the lampooning of absurd late night phone-in radio, won't even register unless players choose to stop and listen to them, further confirming Troika's obsessive commitment to detail.

Gameplay draws on the action-RPG model seen in Deus Ex, where linear missions can be completed in multiple ways. This approach means it is broadly possible to use stealth, wits or massive bloodthirsty aggression to achieve success-though this idea does rather begin to fall apart towards the finale, where some sort of combat skill is absolutely necessary to succeed. The variety of "clan" options encourage multiple plays through the game, especially with the mentally unstable Malkavians who have their own unique (and often hilarious) dialogue options that eerily foreshadow events and lead them into heated discussions with their televisions. Even the music, aside from some occasional industrio-goth thrash nonsense, is pretty good. It's rare for a game to open with something as ballsy as an unlicensed remix of Massive Attack's "Angel."

Admittedly, full enjoyment of Bloodlines depends heavily on a person's tolerance for vampire silliness. Some of the attempts to portray sultry, seductive creatures of darkness are just cringe inducing, even for somebody happy to suspend disbelief and embrace a world of vampire hierarchy. But this, alongside other unsolvable quirks like some wonky walking animations, can be forgiven, as all other aspects of the title prove it to be a much-delayed triumph. Anybody seeking a well written, and at times disturbing, single player experience should track it down; preferably before an official Twilight game is released and ruins video game vampirism forever.