“Let’s Play”: Like watching Mario over your buddy’s shoulder, but over the Internet and your buddy is in his forties 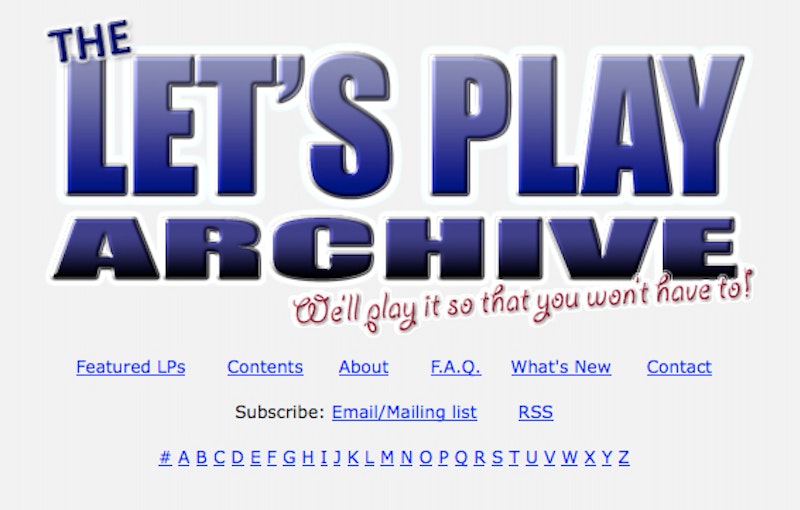 I used to play a lot of video games with Zach Smith, who’s near completion of law school, and, I have heard, owns a motorcycle. Zach and I attended the same private school and lived about 40 minutes from one another and were too young to drive, so after school we’d call one another and each play a video or computer game while talking in our high-pitched voices and, at least in my case, eating Combos obtained in vast quantities from Costco. I vividly remember the two of us playing the original Mortal Kombat on our ancient PCs. Perhaps other kids were down at the arcade learning about smoking and venereal disease and challenging one another to Kombat for quarters, but Zach and I were at separate computer screens in rural Connecticut, squealing with delight when we could manage to make Scorpion fling his harpoon through the clumsy interface of the keyboard.

So imagine my delight when I discovered the Let’s Play phenomenon. As far as I can determine, Let’s Play originated on the discussion forum colossus Something Awful. In Let’s Play a member plays through a game, taking screenshots or videos, and then writes what happened for his colleagues’ amusement. It’s like watching a friend play a game; but the written medium gives the authors a few more stylistic choices. Some write the Let’s Play account in the voice of a character from the game, some interlard their retelling of the video game with industry-insider stories about its development, some break the rules of the game or set their own arbitrary conditions for play, and some invent elaborate backstories that expand far beyond the video game’s own terse explanations. You can find a large library of complete examples at http://lparchive.org/LetsPlay/.

A certain number of the write-ups show moderate literary merit. Some are surprisingly funny, and others show the worshipful seriousness peculiar to people who really, really like Japanese games. Browse and draw your own conclusions about whether any of the examples are worth reading, but I do think that whether or not Let’s Plays are any good, something interesting is going on here. On the simplest level, Let’s Play exposes the plot of a video game to readers who may lack the time or skill or desire to play through it. Video games, as a genre, really call for detailed summaries because they are incredibly time-consuming to complete and there’s no guarantee that a dedicated but indifferently skilled gamer will even reach the end. In this sense Let’s Play works a little bit like the twee and irritating episode summaries on Television Without Pity, providing readers with a detailed written interpretation of something that they probably could experience on their own.

But video games are not television. It’s a slippery medium because the user directs the experience. If two people read a novel or watch a movie they may interpret it differently but they will probably agree on major plot points. Few people will read, say, The Great Gatsby and miss the fact that Gatsby dies, and video games mostly follow this convention—games that have plot generally have rather rigid plots that refuse to bend to the player. Even in these games the experience will be different for different players. Take the classic Super Mario Brothers. The story is very simple—Mario bounds through a bunch of lurid, colorful worlds and eventually saves the princess. But no two plays of Super Mario Brothers are the same. Players may traverse the same stages but their jumps and pirouettes will differ. More open-ended games, and games of different genres (strategy, for instance), will have stories that diverge more widely or that in fact emerge solely from the gameplay. War games in which the player is tasked with conquering the world (a genre with no lack of products—recent examples include the Total War series) may have no designer-created story at all, but the progress of the game may create a narrative in the player’s mind nonetheless.

I’ve never been particularly gifted at creating these narratives from the flow of a video game. If I played, say, Risk on the computer and I conquered South America, I saw a few territories flip to my color and I saw my opponents lose states; I didn’t visualize a bloody clash of arms. Some of these Let’s Play showcase player-authors do see exciting narratives beyond the simple rules of the game, and these are sometimes very entertaining to read. The stories may lack originality, and it’s unlikely that prose inspired by Halo is going to win any literary awards, but it’s nonetheless interesting to see creative minds at work in a genre that receives near-universal scorn. Reading a few Let’s Plays hasn’t convinced me that the plots of video games have risen to the level of good novels, or even bad television. But there’s something in the convivial back-and-forth of the more social Let’s Plays that brings me back to days of simpler video games played sitting before the television with a group of friends and a bag of generic fruit treats. And anything that can infuse video games, often a solitary pursuit, with a little social interaction and a little creativity can’t be all bad.