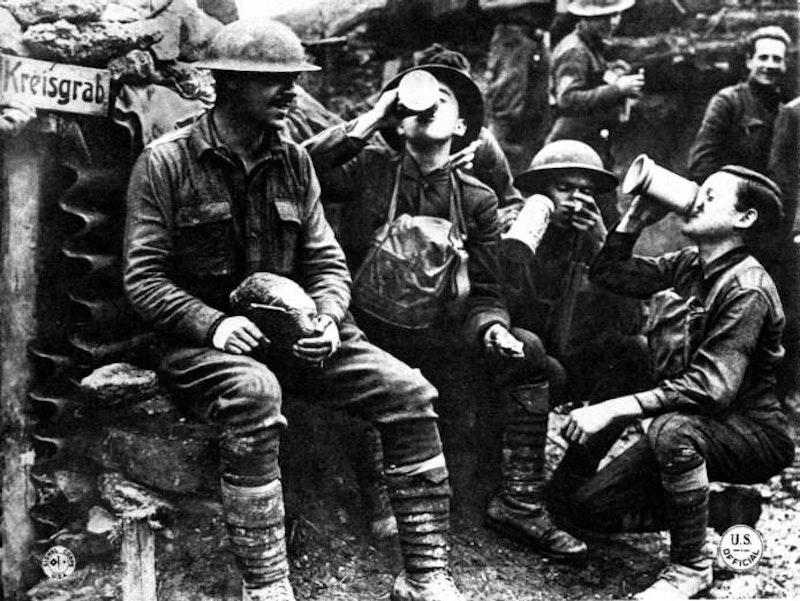 Videogames set in the period 1939-1945 are everywhere. Nazis may even have overtaken Orcs as the identikit enemy most likely to be receiving death at the hands of legions of gamers. WWII games have clogged up the market for so long they've actually burst through the backlash barrier. When somebody expresses resignation about another hypothetical edition of Call of Honour: Freedom Patrol Strike Squadron, they're now likely to be met with hostility rather than knowing chuckles. The observation is accurate, but it's stale. There are a billion WWII games. Some of them are quite good, others are complete bobbins.

Hunt around for a game set in WWI though, and you're likely to stumble across an online forum post asking “Hey, why aren't there any good WWI games?” before any information about trench warfare simulators. There are obvious pragmatic reasons for the lack of WWI action, of course. The ground battles involved a great deal of time sitting in trenches in terrible conditions, interspersed with infantry divisions sent on suicide missions to reclaim a few dozen yards of land. From a design point of view that presents challenges: Press X to subsist on rats, press Y to catch trenchfoot, dance around machine gun bullets—it's not going to translate to a videogame all that well. The learning curve would escalate rapidly from "boring with a chance of instant death" to, well, "instant death."

WWI games do exist, but, for reasons that will become apparent, they generally fit into one of three main categories. First, there’s the niche group of turn-based strategy games such as Ascaron's World War One, complete with numerical movement values, lines of supply and fearsomely complicated interfaces. These elevate the players' view far above the battlefield, placing them in the role of a general or grand strategist—far removed from actual combat conditions. Soldiers in these titles are not distinct personalities, they’re merely shapes on a board, to be moved around and sent to fight and die with a clear conscience. Such titles faintly echo the actions of real WWI generals, dispassionately keeping themselves distanced from the horrific consequences of their decisions.

Flight simulators set in this period have perhaps enjoyed the most success. As with the strategy titles, these games place players (relatively) safely above the nightmare of the trenches. Old school gamers will perhaps remember Wings or Knights of the Sky, but there are also a few contemporary releases around, like Rise of Flight. As well as keeping the player above the human suffering on the battlefield, flight sims are able to depersonalize the experience through abstraction via technology. It's far less harrowing to see planes shooting at one another for entertainment (even though we are aware that the planes are piloted by human beings), than it is to deal with young men's lives being thrown away to machine gun fire.

Taking to the skies also allows developers to sidestep another problematic aspect of WWI. It was an age where outdated tactics were being thrown against blossoming technologies, which is potentially crippling for the majority of action or strategy titles. By focusing on the development of flight, games can neatly avoid this problem and also milk one of the few “boy's toys” that WWI has to offer. Whereas WWII has a whole host of gadgets and hardware for military nuts to salivate over, WWI has to milk what it can.

Finally, there are the titles which borrow the atmosphere and setting of WWI but then try to subvert it as quickly as possible, like the bizarre zombies-in-trenches shooter NecroVision. Although the early levels of this game are based in the trenches, it very quickly defers to fantasy by confronting the player with baffling supernatural events. It's so over the top and ludicrous that there is slim chance of making any emotional connection to real events.

To suggest that the famously violent arena of videogames may be holding back from dealing too closely with the real horrors of WWI may sound odd. But the games based on wars—real wars—like to couple that violence with narrative. Plenty of games featuring nihilistic violence and horror exist, but in almost all cases it is fantasy brutality divorced from any meaning. When they have tried to stray into the real world, videogames have often met resistance. In 1993, when Sensible Software's Cannon Fodder opted to use an emblematic poppy as its logo, there was a minor outrage. This was somewhat unfortunate, as it was one of the few games from that era that actually did try to make the player care about the men they lost. Elsewhere, there appear to be lines that videogames are simply not ready to cross. For all the WWII games released to date, it is interesting that none (to my knowledge) have addressed the Holocaust.

The First World War was, at best, a pyrrhic victory. It has no obvious “evil enemy” like the Nazis, and little to trumpet in terms of overall success. It did not liberate portions of the world from a reprehensible political philosophy. It's hard enough to figure out why it even started, let alone why it continued on for four painful years. The participants are therefore much more difficult to mythologize, as their actions seem to lack meaning. Games like Company of Heroes fly the patriotic flag absurdly high, making the protagonists sound near legendary as they appeal to honour, duty and courage. You want to hang out with those guys. They're not just good company, they're a good company of heroes. In contrast, Expendable Young Men 18-30 Who Died For Literally No Reason will never really give much of a boost to morale.

So while flight simulators will no doubt continue to thrive and an oddity like WWI Medic will pop up every now and then, we are unlikely to ever see a glut of WWI titles in the gaming charts. In a purely pragmatic sense, trench warfare is unsuitable for most games; and the suffering, complexities and ultimate pointlessness of the First World War make the construction of an effective narrative extremely problematic. Without deferring to fantasy or retreating to a point of view high above the main theatre of war, it seems 1914-1918 is simply too bleak, too horrific, to adequately convey through the medium of gaming.