Every superhero has a weakness, including DC Comics. 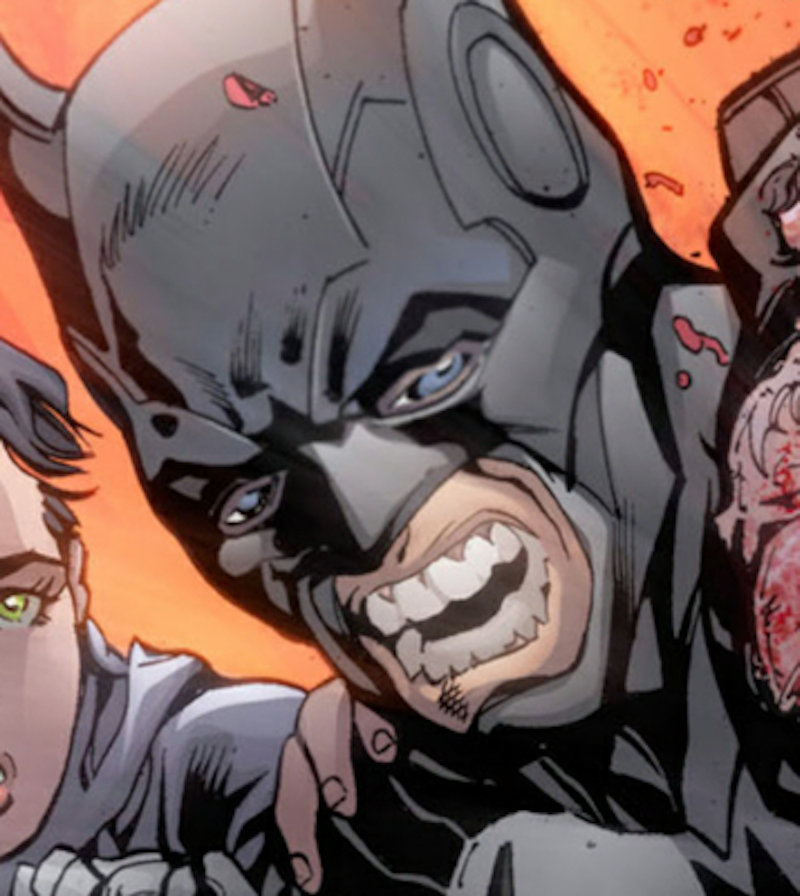 My first exposure to Injustice: Gods Among Us, Warner Entertainment's newest video game featuring the capes-and-tights crowd from DC Comics, was on the subway in NYC several months ago. I stepped off the L train and out popped an ad featuring Aquaman slapping Batman around with a trident. At the time, my only thought was “Oh, what's this? Those costumes look horrendous!” and then I promptly forgot about it.

For a few weeks, anyway. Then I realized that DC has gone balls-out with this game, creating a coordinated marketing blitz that's better orchestrated than anything else I've seen from the company in recent memory. The question that nagged away as I was bombarded with TV spots, digital-first comic book tie-ins, and shiny new action figures was whether or not there'd be something genuinely creative under all the hype.

After all, every superhero has a weakness, and DC's has been its bewildering reliance on flashy shock value to sell comics rather than imaginative storytelling roughly since Dan DiDio took over as Vice President in 2004. That same year, spurred by Brad Meltzer's mess of gratuitous rape and murder called Identity Crisis, DC began its apparent strategy to expand and maintain readership by producing as much dark, edgy, “mature” content as possible. It's a model that’s worked well for the Vertigo imprint, but unlike finite stories like Warren Ellis's Transmetropolitan and Neil Gaiman's classic Sandman, DC's superheroes are locked into a status quo. Batman always has to appear in next month's issue; his enemies need to break out of jail to keep the franchise alive. Sure, plenty of stuff happens to the characters each month, but they'll never really age, evolve, or die—the company has invested too much money in making sure they stay the same. So to simulate the Vertigo effect, we get tripe like the Joker cutting off his own face and half-heartedly sewing it back on in the current run of Detective Comics.

Unfortunately, Injustice's storyline is more of the shallow nonsense I've come to expect. Don't get me wrong—the game itself is tons of fun; the costumes may be hideous (full of random seams, impractical embellishments, and body armour that manages to bend impossibly along with its wearer's movements), but the gameplay is solid. NetherRealm Studios, the company that brought us Mortal Kombat, knock this one out of the park. I even get to play as Batgirl, possibly my favorite DC character, for an extra five bucks, which I consider to be a wise investment. Composer Dean Grinsfelder even contributes some moody scores that fit the tone perfectly.

No, the problem is entirely with the story, written by Mortal Kombat writers with input from DC writers Justin Gray and Jimmy Palmiotti. There's also that pesky comic tie-in written by Tom Taylor and illustrated by Jheremy Raapack, which is where things really go off the rails. We're treated to scenes of Superman—the embodiment of justice, decency, and basic human goodness—shoving his hand through the Joker's chest cavity, burning out Shazam's brain with his heat vision (which is basically child murder, since Shazam's alter ego is around 10) and crippling a pesky teenager wearing some kind of power armour (make that two counts of child murder); Nightwing—the world's greatest acrobat—tripping over a piece of debris and snapping his neck on another perfectly placed piece of debris; and Wonder Woman, who for decades has represented the apex of female empowerment, reduced to showing off more cleavage than ever before as Superman's rebound fuck (oh yeah, he killed Lois Lane too, but it was an accident).

All of this happens as a way to explain why Batman and Superman are punching each other, which is something that happens all the time. To justify something that didn't really need to be justified, we get a big lump of guts and ham-handed moralizing that's supposed to come across as “mature.” The game, by the way, is rated T for Teen.

What's more, DC has done stories like this before—and they were awesome! They even have an evil version of Earth, where the Justice League is called the “Crime Syndicate”! Grant Morrison wrote a story called Earth 2 where the League travels to an alternate universe to fight the Syndicate—which is, in essence, the same plot as Injustice! That could have served as a perfect basis for this game, but instead we wound up with something derivative. DC's writers and editors have become so desperate to appeal to their aging fanbase that they're ignoring the good things they've already done, refusing to build on the legacy that made DC stories fun to read in the first place: people in cool costumes having adventures and solving mysteries that were accessible to young people. The costumes aren't that cool, the adventures aren't exciting, and they sure as hell aren't appropriate for young teens—the people DC should be bending over backwards to please. Injustice, for all that I enjoy playing it, is a tale told by man-children, full of blood and shoulder pads, signifying nothing but the slow downward spiral of creativity in cape comics.