If the election turns out to be as tech-heavy as many are predicting, put your money on Obama by a landslide. 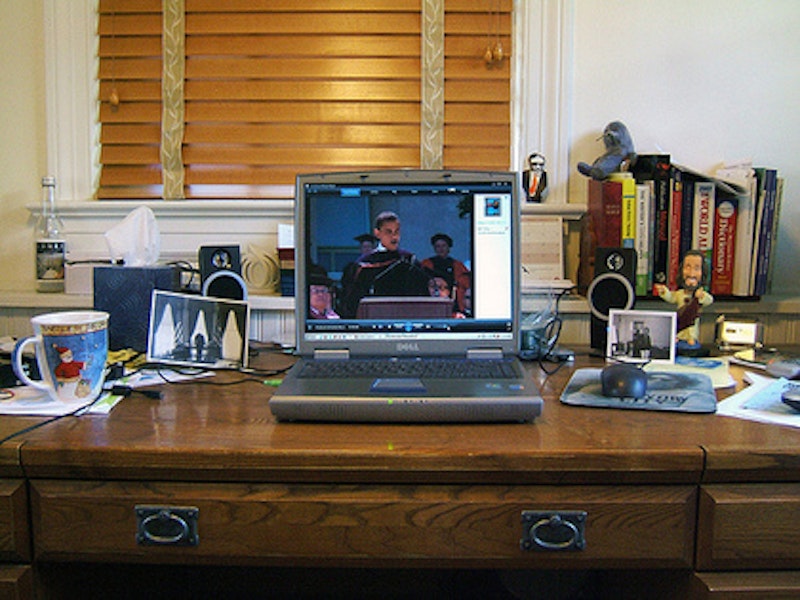 Photo by Tony the Misfit

I’d have a beer with both Sens. John McCain and Barack Obama. President George W. Bush, too. Hey, why not all three at the same time? Because, seriously, who would turn down the chance to drink with a sitting president? Admittedly, I find our current president to be the antithesis of pretty much everything I believe in but, again, I’d have a beer with him. He’s paying.

It’s a trope, now, this notion of a president-as-beer-buddy. We certainly saw plenty of alcohol metaphors during the Bush II elections and, of course, this time around as well. But it’s ultimately a silly idea that has no bearing on a candidate’s potential—it’s political fluff to bandy about with poll numbers attached. If there’s any validity to be found in this exercise, it comes with the word “authenticity.” We want our presidents to be… authentic. Authentic what—authentic politicians? Really? As Eve Fairbanks put it in the magazine Politics, “Why should we want a president who’s just as tangle-tongued and beer swilling as we are? I wouldn’t want myself running the country.”

“Authentic,” especially in the beer-buddy sense, could be substituted with “tuned-in,” “with it,” or any other phrase now in vogue. Candidates drink; they bowl (sometimes not so well); they play bass guitars; they throw sandbags around. But we expect them to set up these calculated events, to act on polling data and basically be the politicians we know they are. Their campaigns attempt to build a public image, one that can easily translate into being Commander-in-Chief.

What is grossly obvious to the casual observer is how different the McCain and Obama campaigns are turning out to be. The chasm is best understood when viewed from the “media” vantage point: their relative communication platforms. In short, Obama owns McCain—and he’s doing it “authentically.”

First, a little background: The Pew/Internet & American Life Project released an enlightening study titled The Internet and the 2008 election. Among their findings: 40 percent of all Americans report getting their news from the Web, up from 23 percent in 2000, which includes 66 percent of Internet users under the age of 30; Obama supporters beat Clintonians significantly in online contributions, online petitioning and online commentary; online video and social networking sites are forces to be reckoned with. A possible caveat is that, despite the surge of online activity in all camps, 74 percent of those polled disagreed with this statement: “I would not be as involved in this campaign as much if it weren’t for the internet.” Add to that the fact that, as reported in Politics, “few of the 518,000 who viewed videos on BarackObama.com were among the 351,000 checking out flicks on the Hillary Clinton site or the 38,000 watching the offerings on John McCain’s site.” But the number of people who do rely on the Internet for political information is up.

The public is more skeptical of mainstream media than ever, thus the greater amount of Internet surfing. Obama, Hillary Clinton and John Edwards all declared their candidacies online. Obama’s record-breaking online fund raising drives are well known. We witnessed the CNN/YouTube debate, for better or worse. Dennis Kucinich implored us to text-message his campaign (sometimes with embarrassing voracity).

We’re “plugging in” more and more. The easy conclusion, now, is that Obama is more “with it.” His campaign is, to the hilt, multimedia. He posts videos of his speeches; McCain only posts transcripts. Everyone has seen will.i.am’s “Yes We Can” music video paean; YouTube and Google searches for McCain primarily chalk up parodies and negative commentary. McCain blatantly (blatantly) ripped off Obama’s slug (“Change we can believe in” became “A leader we can believe in”) and his Web site’s design. Whereas McCain might have a gung-ho relationship with the mainstream press—though even that is starting to deteriorate—Obama is ruling the tubes.

Integral to Obama’s dominance is the fact that he’s going full-tilt with the 50-state strategy spawned by Howard Dean’s remarkable grassroots campaign in 2004. Despite dissent within his own party, Obama will set up shop in every state in the union. And you know what? Virginia is in play. Louisiana is in play. Ohio and Florida are more than tight. McCain’s own Arizona, nearly 30 percent Independent, is in play.

Obama could easily forego federal money for the general election (no one has done that before). Once Clinton fully lets go of her campaign’s databases and lists, Obama will have an unmatched Rolodex. I’ll note here that, with some exception, Clinton’s female supporters are switching allegiance to Obama with relative ease. The junior senator from Illinois holds a powerful hand.

This type of success boils down to communication. Obama matches transcendent rhetoric with an online language to which his supporters relate. Viral video, whether positive or negative, can and will always run rampant: the will.i.am video clocked over eight million hits, network news ran clips of Rev. Jeremiah Wright continuously; McCain’s “Bomb Iran” medley; and the “campaign-changing” clip of Clinton choking up in New Hampshire. But Obama’s straightforward, uncritical videos are consistently high in traffic. His burgeoning base is reflected in steady fundraising as well as the number of hits on nearly every speech he deigns to have uploaded.

The “tuned-in” world slapped its collective forehead when McCain admitted to not knowing how to operate a computer. Before that, on the night Obama found nomination daylight, McCain  delivered a much-derided speech—a speech so bad, no joke, Fox didn’t know what to do with it (one anchor grunted, “it was a hopeless night”)—complete with a horrendous neon-green backdrop and a teleprompter that didn’t seem to agree with him. Rhetorically, he’s no match for Obama on both the lectern and the ISP. No matter that McCain challenged Obama to a series of 10 town-hall-style debates (he rejected Obama’s counter offer): Obama will, barring a case of lockjaw or divine intervention, mop the floor with the Arizona senator.

In a rare instance of middle ground, the two camps collectively gave the finger to an ABC-sponsored debate. The reasons are obvious enough, given the landslide of negative public response. But McCain is not so divorced from mainstream media. Fox, the decidedly insane news network, mirrored McCain’s befuddled view of the here-and-now with such epic gems as the “terrorist fist bump” catastrophe. McCain is a few steps away from pulling a Mitt Romney.

While McCain is fighting an uphill battle with his own quotes, Obama recently launched fightthesmears.com, proscribing to a “good defense is good offense” strategy. It counters such “claims” as Michelle Obama dropping a “whitey” bomb, Obama’s Muslim background and Obama unable to say the Pledge of Allegiance with a hand over his heart. Republican neighbor nattering about Obama’s citizenship? Send that dust bunny the man’s birth certificate. Eleven-thousand people signed an online petition in protest to the National Press Club’s scheduled “visit” from Larry Sinclair. Obama is effectively cornering the market on Web discourse.

Barack Obama has taken the modern Democratic grassroots movement Howard Dean effectively exposed in 2004 to a—yes, I’ll bite—historic level. McCain may be chomping at the bit to suppress ageist criticism, but he certainly isn’t doing himself any favors by admitting his lack of knowledge of all things with an Internet connection. Obama has the reins and is beginning to wrest control of public discourse away from the arthritic hands of old guard media. Finally. And bring on the debates: RSS feeds across the country will be lighting up.