You can find better coverage of the sickening McCain/Palin rallies on YouTube than in the mainstream media. 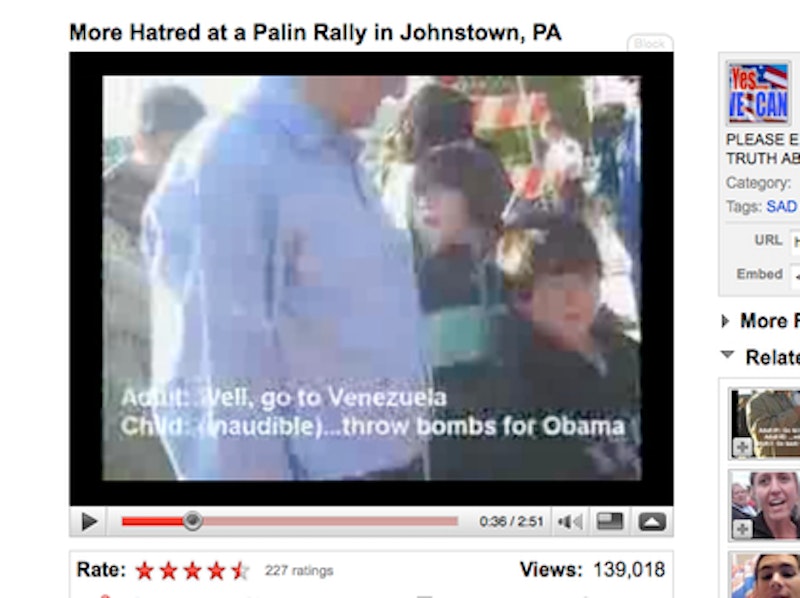 When the Rev. Wright imbroglio exploded, it wasn't news, at least not to the media. Most journalists, producers and editors knew months before that Sen. Obama had a pastor he'd rather not publicize. Rev. Wright didn’t become news until there was video, and when it arrived it was as juicy as promised. Americans got a healthy serving of Wright for a full two weeks, and if they were still hungry, there was YouTube. I had to ban myself from watching the news. It was everywhere.

Video makes news. It grabs us and begs us to pay attention to what's going on.

So when I came across this video on the left-leaning Talking Points Memo, I wondered why I hadn't seen this on CNN, or MSNBC or anywhere on television. This is the third video of its kind that I'd seen. The most recent came from al-Jazeera, so for the sake of argument I'll exclude it from my analysis, though the video doesn't lie. In yet another video a citizen-reporter asked supporters of Sen. McCain if they thought Obama himself was a terrorist; some shrugged, some outright said yes, some said they didn't know.

What makes the video I found on TPM new? It's the visceral sense of mob mentality and proactive hate. Not merely ignorance, which is in the other two, but vocal and emphatic hate—anti-Muslim, anti-Arab, and of course all of it anti-Obama. (Note: McCain knew what he was doing by going after Obama on Ayers and not Wright. Ayers allowed the campaign to defensibly say "terrorist" and "Obama" in the same sentence. Smart. Everyone's seen the Wright video anyway).

Now, let me be clear. The media has addressed the issue of McCain's rallies and some of the statements coming out of in them. Lots of talking heads—especially MSNBC, of course—have addressed it, most recently Colbert King in The Washington Post. Yes, it was even in the debate. The problem is: those statements were inside the rallies. At a rally, it's hard for the crowd to voice any opinion beyond a "yay!" or a "boo!" Inside the rallies is a calm space compared to what's happening outside. The media focuses on what happens inside the rallies for a few reasons. One: their cameras and reporters are there, so it's easier to report and they can support their claims. Two: McCain and Gov. Palin are within an earshot of hateful comments, so they can be held accountable.

Sounds fair. But candidates are also responsible for setting the tone of the debate among their supporters. As Nov. 4 nears and people get more partisan, Obama has been consistently hushing supporters who boo McCain. "Just vote," he's been saying. By contrast, McCain, who must know what's happening outside his rallies, is hardly saying enough. Saying Obama is a "decent family man" once or twice and shaking "no" when a woman suggests he's an Arab is pittance compared to viciousness brewing outside the arena. It's like Marie Antoinette saying, "I guess the French people are upset" as thousands storm Versailles with torches and a homemade guillotine.

When I first heard John Lewis' statement comparing McCain rallies to that of George Wallace in the segregationist South, I thought the Congressman had lost his damn mind. I don't like when black people throw around the word "racist" with undue cause. It stifles constructive conversation. Now, with the help of video, I see Lewis' comparison was far from an exaggeration—if perhaps unproductive. McCain says he admires John Lewis, so why feign umbrage when he's trying to urge caution and civility? McCain is in the twilight of his career; is this how he wants to end it?

Video is powerful. The media is playing it soft and safe by not airing the dirty laundry stinking up our political discourse and wafting about outside Palin and McCain rallies. They know that if they play them conservatives will bury them with criticism and galvanize the base against the liberal media. But there's a reason the McCain camp doesn't want the videos played. Why? The people who hate Obama are a small minority of voters. The vast majority of Republican-leaning voters may disagree with or even dislike Obama but they don't hate him. These lukewarm voters would flee the Republican party if they knew they were the party of hate and ignorant nationalism. These are suburban voters, urban Republicans, whom McCain has held onto for because of his moderate views and record of fighting the base. He can't afford more hemorrhaging.

The media exposes the dirt candidates tacitly choose to endorse, if not simply ignore. Sometimes it's unfair, sometimes not. The public saw and evaluated Obama and Wright. Many decided the two were different—indeed, if you read Dreams of My Father, the book Obama wrote long before he had a political career, it's clear the two hold vastly different philosophies. The public made the right decision.

It's time John McCain answer for what he tacitly chooses to endorse, if not simply ignore. The public can make up their mind if it's relevant.