Texts From Last Night offers a better glimpse of life-as-lived than any other social networking site. 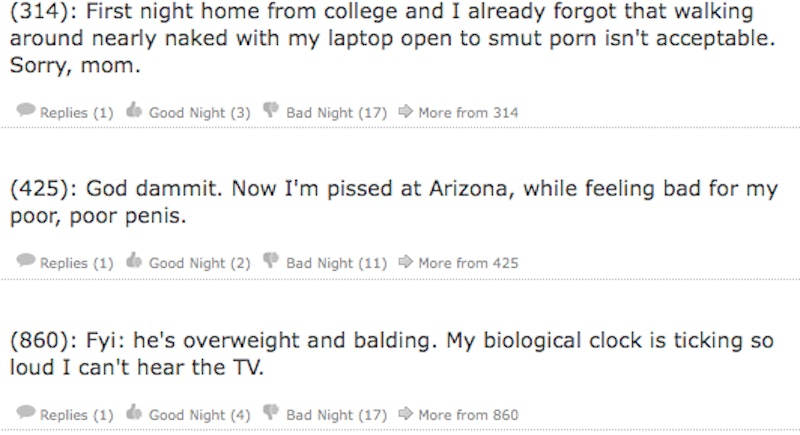 It’s just past 2 a.m. and you stumble out of the bar. You look around and see only strange faces, a sea of not-your-friends. Everyone is on their cell phones or wandering away aimlessly. Taxicabs are entered. You come to the drunken realization that your friends are nowhere in sight, and you will have to find them later. But for now, opportunity beckons. You pull out your cell phone and take one last look around to be sure you’re all alone. Before you can even consider the ramifications of your actions, it’s too late: you just drunk texted.

Manifesting itself in multiple, equally-hilarious/debilitating forms, the drunk text is the ultimate captor of fleeting moments. With no voice on the other line to reel you in or remind you of the potential mistake, you can say whatever you want and no one can hear. Dirty things, mean things, stupid things—you can send them as you like even in the comfort of a crowded noisy bar.

While a majority of them are poorly-typed variations of “I want to cuddle” and “PS- You’re a bitch,” they do provide for delightful in-the-moment personal news briefs, incoherently alerting you to the presence of a celebrity/ex/naked person at Drinking Establishment X. Despite their often mundane content, though, they can speak volumes. Getting a text message from someone you’re interested in dating is probably one of the most exciting things to happen in budding romances, along with the countless hours you will spend analyzing every spelling and syntax choice in said message. Getting a drunk text message is probably a hundred times cooler because you know he/she is thinking of you when she’s out with other people and his/her filter is turned off (or they’re drinking alone, in which case, it may not be such a positive).

It is the moments of pinpointed excitement and still-drunk-the-next-day misery that build the beautiful opus that is Texts From Last Night. For the uninitiated, the website allows you to enter bizarre/crazy/humorous texts and expose them to the rest of the world. Aside from making your life seem boring—albeit certainly less filled with disease—the website is a brilliant living document of twentysomething life in 2009. Tucked into the blackout drinking, sex, and vomit stories are snippets of defining pop culture: snide remarks about Ed Hardy t-shirts or Twilight’s stars.

The only identifier for each text is the three-digit area codes that make you realize how diverse and fascinating our country is. Every so often a city gets a shout out by way of a description of a quirky homeless person or recognizable hipster, and you can just marvel at how universal these experiences can be.

Lurking beneath the surface, though, is an extended discussion about morality that doesn’t show up in similar night-life documenters like Look at This Fucking Hipster or the-cobra-snake. LATFH and cobra-snake are two sides of the same coin as they both publicize a certain music/fashion scene found in very specific locations. Certainly, LATFH is mockingly critical whereas cobra-snake is more of “look how cool everyone is” situation, but both focus on a very small crowd. The dialogue presented in these two sites through around-town photography glosses over the sex, drug/alcohol use, and relationships that lurk in the images.

Truthfully, these sites glorify the act of partying and present only images of revelry and a specific definition of coolness. Like a running joke, the only beer-in-hand to be found at LATFH is Pabst, but the effect of said beer goes unmentioned. You don’t hear about the morning puke or regrettable sex partner and indeed don’t really see any of the party’s side effects. You see only famous faces, pretty faces, weird faces—individuals among a crowd or simply the crowd itself or maybe even an evocative location like a New York subway stop. They are snippets outside of the real story. They are exclusionary both in their subjects and in the stories they choose to tell.

I worry that Texts From Last Night will infect our lives and change our habits, a form of the insidious Real World Effect (where the presence of television cameras alters everything without this fact ever being mentioned). I have friends that I know are constant followers/contributors to the site and I worry that I will unintentionally go out of my way to send them fun texts. The effect of this doesn’t show up in those blackout drunk texts—those are fixed, immovable phenomena—but it might affect those funny texts that go out after only a couple drinks. Even now, you can see a few messages cropping up that I wonder aren’t people just sending something clever that popped into their head, knowing it might be funny enough to get on the website (perfect example: “(773): Let's start a violent farting gang. We can do walkbys.”). This is, at its base, a bizarre form of showmanship, and it changes the nature and etiquette of the way we interact in a strange way. Already we have so many fake ways to present ourselves to the world that I would hate to lose a medium of true communication (even simple “ok, sounds good” messages) to the influence of putting on your clever face.

Yet, even if some of the authenticity is stripped from our lives, what stands is an amazing collage of our generation. The constant barrage of “Alcohol 1, My Dignity 0” type texts aren’t just funny (even if they are), they show the way we interact with drugs and alcohol. We recognize the faults and often the messages honestly discuss the negative outcomes of our decisions. There is a glorification of that fat/awkward sexual encounter, but lurking beneath the funny text about your mistake is an unavoidable confrontation with taking responsibility for your decisions. We see the cause and effect of last night’s party, and we can see a real-time weighing of these actions.

But the thing that’s most wonderful is the sense of community interaction, often so lacking in our individualistic methods of connection like Facebook or LATFH. The facelessness of the messages allows us to put our own friends in the stories, using the area codes as backdrop scenery. You see the caring between people in the “Please come pick me up, I’m naked at a stranger’s” or “conf klz Geu oe” followed by the “stay right there I’m on my way.” You see the desire to tell stories and jokes to our friends at all times, keeping in constant touch even when most of our mind’s other functions have turned off. Everyone is there for their friends to deal with the sickness and shame but also take part in the wild times the night before. Every time I look at the site, I get sucked in for hours, laughing, saying “Oh my God,” but mostly, it makes me miss my friends that aren’t here with me—more than any other form of social networking has.