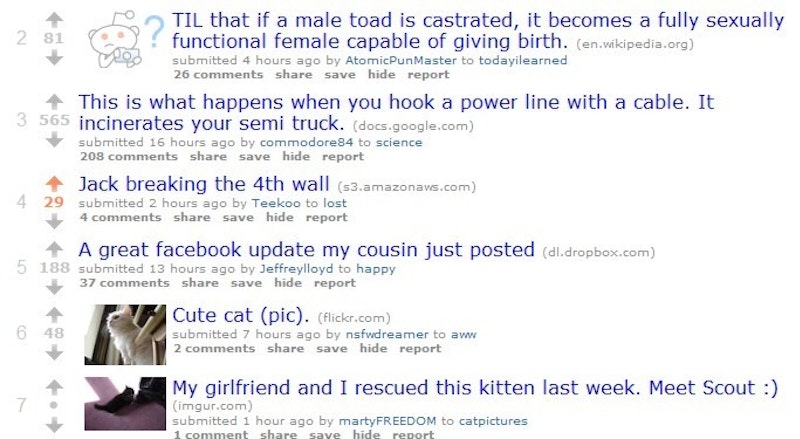 What happens when big corporate media floods a social bookmarking site like Reddit with spam-in submissions in a shameless attempt at self-promotion? Well, when they get outed by Redditors who expose the guilty accounts/socks, the ones responsible make statements of “Do as I say and not as I do.” Among the guilty parties, this month G4TV and GamePro Media are admitting to paying a spammer to promote links and artificially inflate links and pages.

I used to be a fan of GamePro when I was a wee gamer. I’d buy an issue when I had the chance, and I even bought a copy of SwatPro when it was on the shelves. Over the years however GamePro has changed into a more corporate yes-man magazine where bad games got good reviews for being corporate sponsors and good games were given bad reviews because they didn’t pay well enough. It was starting to get as stale as the AOL promo discs wrapped into each issue. I’d still buy it when I could find it, but my cash would eventually start going toward other gaming magazines.

Now you couldn’t pay me enough to read anything from GamePro Media. The breaking point for me was, of course, when GamePro Media paid a spammer to submit links to Reddit and artificially inflate scores on links in an underhanded attempt at self-whoring. Of course GamePro has apologized to the Reddit Community on the whole... if you could call an insult an apology:

We’re hoping that the more reasonable of you will respect our honesty regarding our deferred dishonesty, but we’re sure some people will run riot with it, which is to be expected – and in some places celebrated – on the Internet. Ultimately, we respect Reddit and its community, at least the ones who don’t live under a bridge and forget to take their meds. We also believe in our content, but in future we want you, not spammers, to be the judge of it.
Aww, how bitter of them. The brilliant minds over at GamePro Media must think this is witty. They gamed the system. They admit the system can be gamed and tell Redditors to not downvote any links from Gamepro.com. They’re lucky to get away with just Gamepro.com’s submissions being downvoted and not every website owned and maintained by GamePro Media. If someone wanted they could write up a quick greasemonkey script and auto-downvote any and all GamePro Media content. Frankly, they should have just said they were sorry and been done with it.

Most people aren’t fully aware of what upvotes and downvotes on Reddit and other social linking sites do for the companies who products are being voted on, so let me explain why artificially inflating article and game links on Reddit is actually worth paying a spammer for and why it’s so wrong.

Upvoting: The persons paid to do the upvoting have multiple sock accounts, to add to the upvote total, affecting a link’s rank on the front page. This can prevent other sites with better content or first response (in the case of news stories) from having their proper place on the front page.

DownVoting: Having a bunch of socks to make downvotes with is also a significant problem. Downvoting links to similar content can prevent it from being seen altogether, making the spammed content the only kind that’s out there regardless of its value.

Pagerank: By tampering with a link’s value, its rank and chance of appearing on the front page is obviously affected but the page rank on Reddit also affect how content appears in search engine results.

Comments: A bunch of sock accounts can post similar yet different opinions from one person, artificially affecting someone else’s willingness to put their 10 cents in.

It’s bad what G4TV, GamePro Media, and VG Charts have participated in, trying to game the system. Even though they’ve admitted to paying someone to spam Reddit with links and upvotes, the real scope of the damage is still being rooted out. Moderators on Reddit are doing their best to sort out the socks from legitimate users, which is sometimes an easy task, but considering the honesty of the guilty parties involved, I doubt they’ll find them all short of an IP ban based on domain. But even that might not patch things up. As of now, most of the spammed content has been downvoted to the extent it almost looks painful. While VGChartz may have been sincere in their apologies to the Reddit community, GamePro Media and G4TV in my opinion don’t seem to have learned their lesson yet. And if you’re like me you probably won’t be wasting your traffic, bandwidth, or time on them anymore either.

Here’s the thread that reported the incident in the first place.

If you’d like to see the apology statements for yourself here are the links: 1, 2, 3.