In which our self-reflective columnist summarizes the comment boards for his first year of Splice Today writing. So meta… 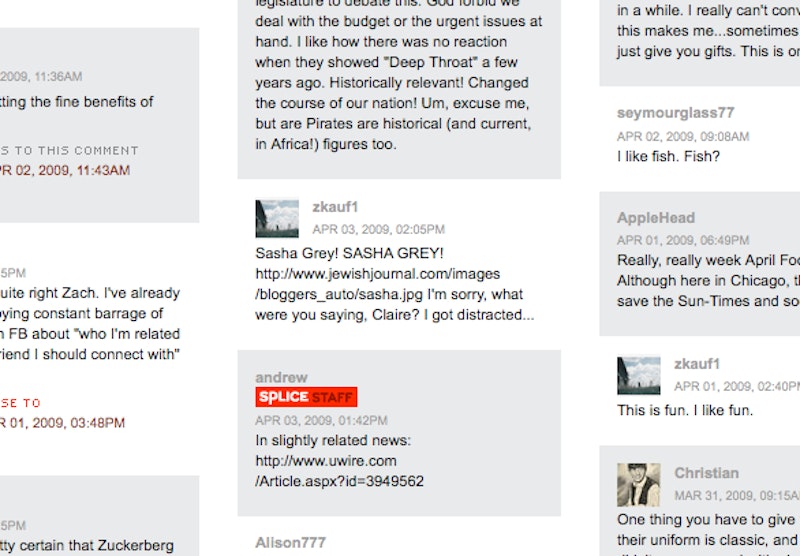 The Rice sticks? Trader Joe's Snacks in general? If the rice snacks were a hedge on your general snack selections, it wasn't a bad bet. Low risk, high reward if they taste great and if they suck then you have the benefit of a diversified portfolio of additional snacks. I know you're bitching about corporate bailouts but the stuff going on in the market is like you putting all of your snacking hopes into Rice snacks with the expectation that wheat and potato based snacks are overpriced. Well isn't it lucky that Trader Joe's has a money back guarantee on items that you try and don't like. That sounds like a perfect bailout that restores your confidence in Trader Joe's snack foods once again. are you talking about trader joe's or wall street? What a moron. I thought journalists, ahem, paid journalists, were supposed to have thick skin.

Also I dug this article for, to name one reason, the fact that so many random nouns were capitalized I felt like I was reading German.

I think it depends on what state you live in, as well, in thinking about taxes. I'm like Deities, just noticing the net number on my check, but friends in New York City and L.A. are not as nonchalant, even though most of them are not anti-tax types.

I'm not an expert on linguistics, but didn't the slang "teevee" go out of fashion around the time Seinfeld mercifully ended its run?

What a filthy mouth! I love this photo, though...

I read in some history book that it used to be a high school education was sufficient for service jobs like waiting tables. But $40K a year is totally worth the price if you can talk about interesting books with your good looking customers.

Bravo, Tejas. Man if you'd ever been a waiter, you'd know its a pretty difficult and stressful job, and there's alot more to it than just bringing the bill "when you're set." if they don't bring the bill just walk up and wait at the cash register, that’s the quickest way to get it paid.

The postal system, which is chronically in disrepair, ought to be privatized; it'd be more efficient, customers would receive better service and maybe the cliche "going postal" could be retired.

I don't think I've read the topic of an Obama assassination handled so deftly. Joe MacLeod is crossing over into territory that the mainstream media won't touch, and, as Doing Deities said, he handled it well. Who hasn't thought of the possibility that some wacko takes a shot at Obama? You would've thought by now he'd be dead meat!

toward race relations in this country they have been shot. Lincoln, King, Malcolm X, RFK, JFK... As awful awful awful as it would be, I just can't see how Obama really survives this. What does Fox News do if Obama is assassinated, they wont be able to make sick smirks about his safety any more. That JFK made real strides in race relations is debatable, but nevertheless the leaders gbaker mentions above isn't complete. Garfield? McKinley? I think, and hope, Obama, if elected, will be safe. Secret Service protection has come a long way since Kennedy rode in an open-air car, and today, Sirhan Sirhan wouldn't be able to get into the Ambassador Hotel with a gun.

gbaker: can you really not think of a single pro-good-race-relations politician that is still alive? Congress must be filled with segregationists. Also, are you saying you cannot possibly envision a world with Barack Obama alive? Color me...contrarian, but I sure as hell don't think Barack is going to be offed and I sure as hell didn't stop pumping my own gas during the DC sniper run. Yeah, I mean the last time a president was seriously attacked was 30 years ago with Reagan. That doesn't mean someone won't try, but all the race-related assassinations you mentioned happened many years ago right in the birthing pains of the civil rights movement. We've come a long way (not surprisingly with people born around the time the schools integrated) when Bob Johnson and Oprah make gobs of money in the entertainment business.

This was a great column except for the ending. It's guys like Gore that make Obama so appealing.

I mean if Malvo and Muhammad can go on a spree for weeks, you can't discount anything. Hold Up, Tim Russert just died?? What?

Yeah, but I think the sniper problem has been taken out of the equation, gbaker. At least for presidents and high ranking officials. Getting to Obama would be very hard, thankfully, because security is so tight. haha dude im pretty sure the chances of obama being killed by a sniper are much higher than an "inside" job. remember that quote from godfather II?

Of course Dick Gephardt retired from Congress around the same time Godfather III came out. That's hyperbole, but obviously Obama and other candidates have a coterie around them when they're kissing babies or eating Polish sausages or corned beef sandwiches. Hey, I love "24." It was very sad, especially for his wife and son and close friends, and always a shock when a household name dies at 58. I understood. Imagine if Hollywood ran the news, and George Clooney or Spielberg died. Besides, like you said, Russert was an incredibly passionate journalist who loved his job. oh, sorry, teevee. omg.

Man, Sour, you don't know what STP stands for, OFA!

He's right. Watching the weather on local news is worthless. Mr. Wrong, you're right about DC statehood; it's absurd that residents there have no representation in Congress. that gun ruling was a load of ass.

no guns for butter, vote peace.

Mr. Wrong is usually hit or miss, but this was a pretty great column. I've got a 10-year-old television set that friends make fun of—no HD—but the picture is still great. Why spend $$$ when the nag is still running?

I've got an iPod from 2003 (regrettably on the fritz now) that I'll use until it dies. But seriously, that phone for 5 years? I'd understand if he had bought a high tech phone that has features you couldn't get with a free upgrade, but that thing seems pretty bare bones. "Free" is relative, since the cost of the phone is built into the monthly bill, but if you're paying for it anyway, why not get the new phone? It seems as though our author, in otherwise intelligent applications of "if it ain't broke, don't fix it" has been using an outdated and marginally effective piece of technology when he had already paid for two upgrades. Oops!

All phone companies offer free upgrades, why not get one, you did mention that you would take a new one if offered.

I'm obsessed with the New, but really only unless it’s related to clothes or Apple products. i read every review, blog post, critique, etc of it before i got one. clothes are a different story. things wear out, you get fat/skinny, or you just get sick of wearing the same thing all the time.

I love new stuff. Yeah, the formula for built-in obsolescence.

Amen, Greenlight. Mr. Wrong obviously does care about who reads his articles, which there's nothing wrong with, but being forthright is an important virtue for any journalist. Who cares if he's putting on a 'tude or not about caring whether people read his stories. Reparations for the inhumanity of slavery is a good idea, just 140 years too late. i dont watch the olympics/have a TV but if i did watch, it'd be for optimal views of barely clothed mans.

Monday holidays, a Nixon bone to the federal bureaucracy, have stripped holidays of their meaning. I don't have sympathy for the fat cats who are packing up boxes, either (although it's a different story for the support staff at places like Lehman), but Joe MacLeod's complaining about his 401k rings a little hollow. He has a job, and apparently a good one, if he has that benefit.

Even with all the hype on the news and on the Internet, I'm having a hard time fretting about our economy. Oh yes, Sponge Luke, once Jan. 20 rolls around and Obama's in the White House, the country will "be in the black again." It's clear you don't pay attention to economics or even the current news. Probably two or three times.

This guy is so fucking hilarious. My favorite Splice columnist.

barista wants to know my life story. Whatever happened to social boundaries? Whoa! I just read my above comment. Usually my interactions with cashiers and the like are pretty neutral: not quite friendly, but certainly not nasty or caustic. I think there's an unspoken relationship between consumer and employee that a muted lack of emotion and a sort of robotic, mechanical operating mode that maximizes efficiency and speed.

What's your point? seriously, I enjoyed this... very funny.

Hey, jasonzabel, are you humor-challenged? I hope you get paid by the Hussein.

serious, and I appreciated this "article." highlarious.

The head theater vampire mafia sequel--great! What about a movie about the guy who invented aglets ?

I think "Vampire Mafia" is a great idea for a movie however, it would have to be a Russian or Chinese mafia. Too much garlic and Holy Water!

Normally, I'd quarrel with Mr. Wrong's somewhat juvenile writing style, but he's absolutely correct in this article. Americans just have to put a lid on buying and buying and more buying. There's always something you've forgotten about.

With the economy an utter nightmare in Los Angeles, and my jobs drying up, my girlfriend and I have already put a limit of $100 on Christmas presents.

great article. Maybe it's the fact that I just never dug the type of food traditionally served (turkey, stuffing, mashed potatoes, yams, cranberries, etc.). I loooooove burgers, hot dogs, and all that great all American grub. I've never tried to barbeque a turkey but I bet it wouldn't taste as good as a pound of sirloin.

I'm thanksgivingful for this article introducing me to the word thansgivingful.

"How man times will cameras show...a football?" Agreed Hunchback, the O's will finish in last right behind the Sox. If we don't get a slugger then we're done for. My favorite team is the Colts.

Let's hope for Mr. Wrong's sake that next year, at Super Bowl time, all the Doritos and pizza and beer that he loves (and who doesn't?) aren't subject to sin taxes of 20 percent.

One, I don't think Phelps will have problems with meeting women. Michael Phelps is one of the most successful athletes of all time, so what if he smoked a little ganja? Marijuana should be legalized, and Michael Phelps could be a great spokesperson for it.

Wasn't it Spider Man's uncle who said, "With great power comes great responsibility." Getting the girls and the endorsements is the easy part of being a big time sports hero. i thought i was going to read a really interesting critique, but this was more an un-researched rant.