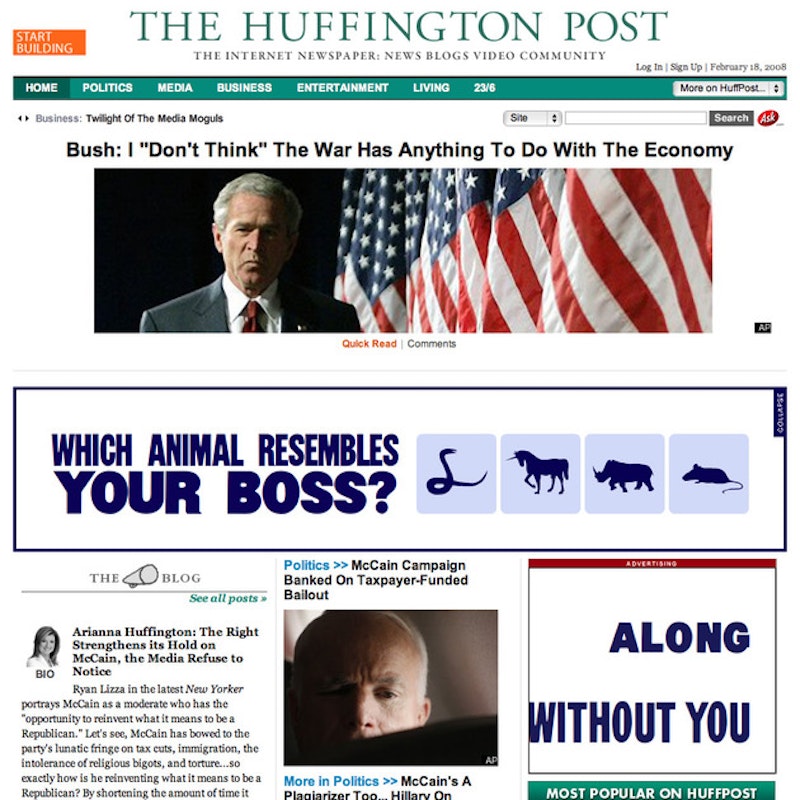 America Online, the Washington Nationals of the Internet, finally is getting some positive ink with the surprise announcement of its $315 million acquisition of The Huffington Post. Allying itself with a media celebrity like Arianna Huffington is undoubtedly a good move for AOL, at least from a publicity standpoint—but is it akin to the Nationals wildly overpaying for Jayson Werth?

There’s no definitive answer to that one; after all, nobody yet knows if that Werth deal is going to be … well, worth it. Likewise, until the new Arianna-OL starts taking shape, it’s not possible to get a firm grip on just what (if anything) will be different for either partner.

Arianna is claiming that AOL users won’t be inundated with HuffPo’s left-leaning views, which begs the question of just what HuffPo’s bringing to the deal. After all, the HuffPo cachet, by itself, will only go so far if AOL doesn’t actually try to exploit it.

But the pitfalls of trying to capitalize on it are pretty deep for AOL. Turning itself into a leftie version of Foxnews.com or Drudge isn’t going to fly with its middle-of-the-road users, who by definition make up the majority of its members (and yes, AOL does have members; currently it’s estimated to have about 21 million and rising—a decent number, though well below its peak of 30 million around 2001).

Huffington herself will serve as president and editor-in-chief of a new group inside AOL, overseeing roughly 700 workers at HuffPo, AOL and various other blogs. And she’ll be answerable to AOL CEO Tim Armstrong and its board of directors, a position she’s rarely been in before.

It’s been an impressive rise for Huffington, who started out as something of a national punchline by being married to Michael Huffington, whose failed bid for the Senate in 1994 eventually was followed by their divorce and his admission to being gay. Arianna started popping up as a pundit on various outlets, most notably Bill Maher’s Politically Incorrect—though her perspicacity was understandably somewhat affected by her apparent inability to realize just who she was married to.

Nevertheless, she was able to parlay those appearances into being a reliable media presence, even if her personal politics weren’t so reliable. Her most memorable Incorrect appearances were on a recurring segment called “Strange Bedfellows,” wherein she and Al Franken would appear together, pajama-ed, in bed to offer conflicting viewpoints.

Arianna was on the right then, but she swiftly began moving to the left. (The right side was, in the late 90s, already heavily populated by Drudge, Rush Limbaugh and the like.) From there she launched an ineffectual campaign for California governor during the 2003 Gray Davis recall and generally continued her somewhat aimless travels until launching HuffPo in 2005.

Can Arianna successfully tone down her political rhetoric as an AOL editorial director? She’s done it before, and several observers figure that if/when AOL continues to go down the tubes, she can extricate herself from it, and claim that her “voice” was unfairly muted by the suits, and emerge as an even bigger power player.

On the AOL side, this is clearly a Hail Mary pass by Armstrong, who’s been on a tear of late, trying to pump more and more original editorial content into his product. This includes the earlier acquisition of TechCrunch (whose founder, Michael Arrington, is much less likely to go quietly, if that’s what it comes to) and the pseudo-successful likes of Patch, AOL’s effort at driving local and community newspapers out of business by hiring freelance staff in small markets around the country. If the HuffPo deal doesn’t play out, it’s not going to be like the AOL-Time Warner deal in 2000 that everyone’s drawing parallels to; after all, both AOL and Time Warner continued operating after that ill-conceived merger went belly-up. If this one follows suit, we’ll still have Arianna. But AOL?

The one immediate area where the HuffPo and AOL cultures agree is paying for original content. HuffPo famously doesn’t pay anything, and, given what I know of Patch and some of its other OC ventures, AOL might as well be doing the same.

Even if the HuffPo-AOL deal ultimately comes to nothing, though, it does leave one wondering if similar deals aren’t in the making. Already there are rumors that Gawker Media, Glam Media, and Business Insider might all be acquisition targets in the short term. Of course, this kind of conjecture always follows a perceived “game-changing” deal—Ted Turner was supposedly going to acquire CBS at about the time that General Electric bought NBC—but it wouldn’t be all that surprising to see another big “new media” title get swallowed by an old media name.