If A Social Network Dies...

...does anybody really care? 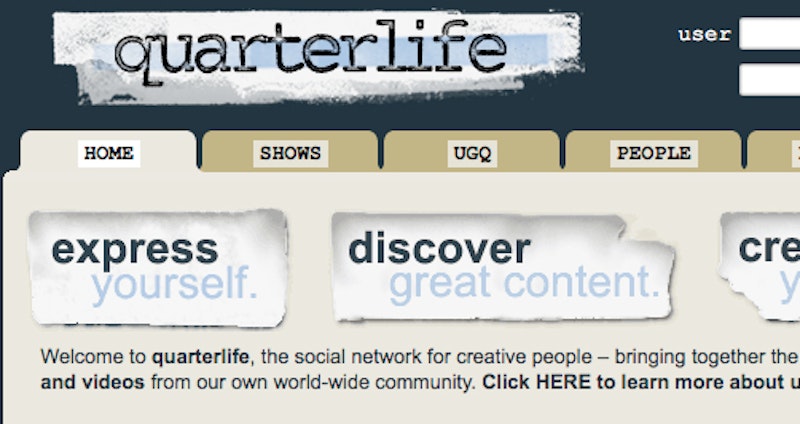 I fell hard for the social networking craze. I joined so many sites I lost track of most of them. Two or three years ago, each site promised to serve a new community, or niche market, and was trumpeted by the media as a novel, near miraculous invention. Every site was based on “you,” and so it felt like it could never die. If a site died, a little part of you would too. That was never going to happen!

Cut to last week when I received an email from Quarterlife, a social networking site for creative young people. HYW wanted to be my friend! I was somewhat excited, because I rarely receive emails from Quarterlife, and everyone wants a new friend! Then I thought, Wait, I never go on Quarterlife anymore; I wonder if anyone else does.

No, nobody visits Quarterlife anymore. I quickly checked the site’s Quantcast numbers and was proven right (a lot of people have problems with Quantcast’s methodology, but people have problems with every agency’s methodology, so I’m going to use Quantcast and Compete because they're free). Quarterlife's numbers are way down. Go to their homepage and you see this message: "Starting today we are asking for a SMALL VOLUNTARY SUBSCRIPTION FEE or a DONATION of any amount you choose. This is the only way to keep quarterlife from going dark, and losing all the thousands of photos, artwork, music, and writing you've uploaded."

Begging for money is a site's last resort. SimpleWeather.com did the same thing, falling from its meteoric high when Time magazine trumpeted it in 2007. Since Quarterlife's user base is young, artistic people, I doubt they have the money to support it (I don't). The site will die as fast as its television show did.

This is what happens when Facebook and YouTube amass large user bases and manage to hold their attention. Facebook allows you to upload photos and video; YouTube allows video and promises a large potential audience. Who needs Quarterlife? As ad agencies shrink their budgets in the recession, these niche sites cannot compete anyway, and subscription-based social networking will not work.

I started checking other sites I once joined. The owner of DList—the gay MySpace—had written off the site months ago, even as I still continued to use it (and even as ads remained on it). Saatchi's social networking site for artists lost nearly all of its popularity from its much-publicized high, down over 90 percent in just about a year. Some sites have managed to maintain their popularity; LinkedIn stunningly is still holding strong, though I'd be wary of Facebook. Same goes for Vimeo, which has emerged as a proper companion to YouTube. But others, like Orkut, have fallen flat on their faces.

It's a curious thing when a social network dies. Users invest a lot of time and, sometimes, emotion into a site, literally creating it. Its demise can be sad and bemusing. A newspaper dying is one thing, but a social networking holds your information, a network of friends and often your work, your labor.

But the bottom line is the web may not be Chris Anderson's long tail, capable of supporting thousands of small but thriving markets. If there is a long tail, it’s a sharp and vicious one. Facebook and YouTube—MySpace is dying a slow death—monopolize social networking and user generated content, and the niches cannot compete. I'm not complaining; I'm on Facebook several times a day. It's wonderful, but it's the Microsoft of social networking. The nice Microsoft, swallowing the competition simply by doing what they do better.

In the end, everyone wants to be where everyone else is hanging out. It's why all the major artists, filmmakers, and hip people move to the coasts and Middle America is left with the scraps. Sure, people leave the huddle, but only when they’re so famous they don't need it—like when Chris Crocker decided to leave YouTube.

Of course, soon after Chris Crocker thought he could leave the huddle, YouTube and its big audience, and start his own website, he was back again. No one can afford to leave a thriving social network. Just ask the ones that have recently died. They know this all too well.