From Boston to Texas: Deconstructing the Digital Horror

A desensitized America can't look away. 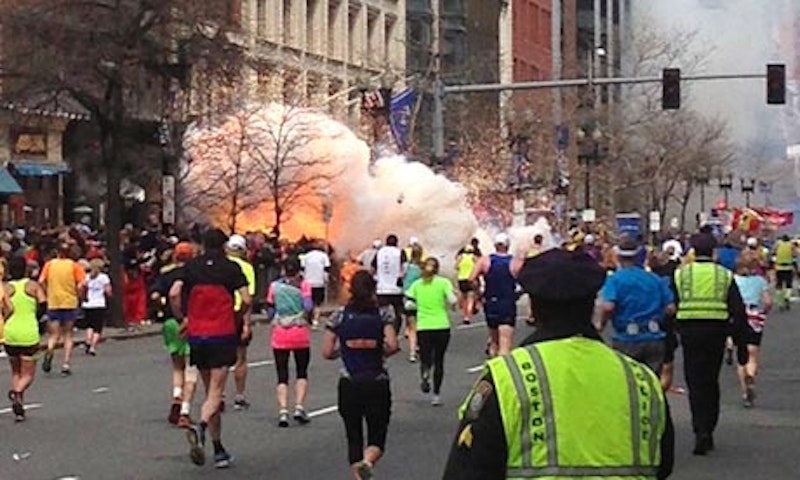 Last week exposed an American wound. As terror suspects ran loose in Boston, causing a citywide lockdown, the media ran into an information lockout. Twitter became a (sort of) reliable source to relay information to Bostonians about the status of a federal manhunt. There's a user-submitted image of SWAT team snipers lying across a suburban shed that is now iconic. It is equal parts post-9/11 postcard and dystopian movie still. Meanwhile, halfway across the country, a fertilizer plant exploded and destroyed an entire community. There's an image of that event in particular that I wish I hadn’t seen. That image wasn't from a news camera or any traditional media outlet; it was taken from YouTube footage uploaded by a man who happened to be recording the pre-explosion flames from across a field.

There's a bit of leeway in the YouTube guidelines about the content of live footage. The general rule is that if your video includes nudity or violence the footage is removed immediately. Of course, the restriction is circumvented by major media companies that push trailers for R-rated shoot-‘em ups and sexy crime dramas every day. That's hardly a revelation, but it's important in framing the current social climate. The message is that it’s okay to manufacture fantasies of fear but depictions of actual fear must remain beyond public access. But there are loopholes to such censorship. In the case of the Boston bombings, graphic images of bloodied bodies became universal currency for newspapers. Whatever your political or social sensibilities, they become irrelevant in the case of a suspected terrorist event. What is more important is that the message be conveyed, that we are being invaded or we’re on the lookout for specific persons. It is difficult to watch online videos of the explosion and not feel indignant.

The catch about the video of the Boston bombing is that despite it's immediacy, it comes across as somewhat abstract. No one person appears to have been targeted more than any other. Every person has to run for fear of further harm. In the video of the Texas fertilizer plant explosion we never see the cameraman or his child passenger yet there is far less abstraction. A man and a child viewing a freak accident becomes a complete portrait of fear. The most jarring part of the footage is not the shock wave that hits the car but the confused pleas of the child, desperate for her father to drive away. It’s a testament to an engrossing advantage of the video medium over photography that an entire experience could be encapsulated in this way.

That the video is still up at the time of this writing, actively viewed by hundreds of thousands of people, and commented upon with equal parts nonchalance and emotional outcry raises various questions. Why has the cameraman responsible for the footage not pulled it offline? Why did he choose to keep the camera running beyond his child's initial screams? At what point and by what language would the footage have breached YouTube's user guidelines? That the video is simply another article to add to the bonfire of a media-addicted and desensitized populace doesn't effectively address how valuable it is in the study of our culture.