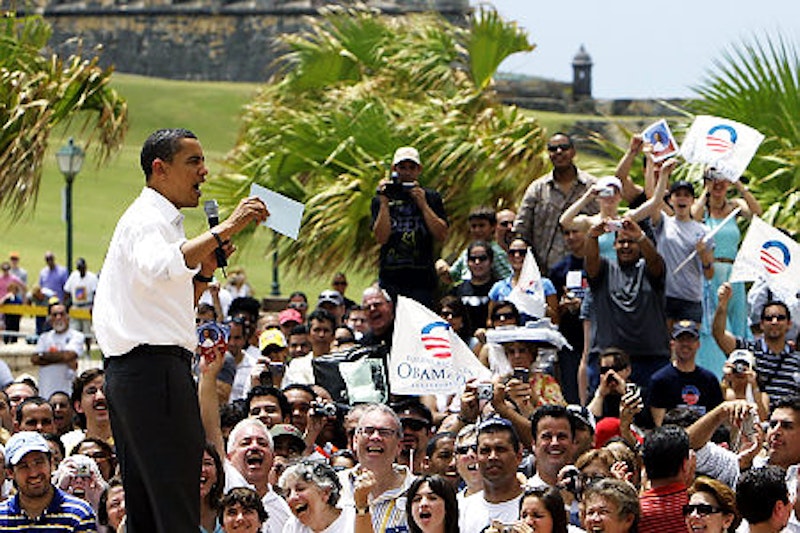 I turned on CNN the other day, expecting studies in how Twitter was coping with the Troy Davis execution. No dice—our President was giving a boilerplate jobs bill speech either under or on an Ohio bridge. Whenever I catch one of these live, I can’t help but anticipate an assassination. Obama’s standing with his back to a big stretch of overpass—no doubt he’s got the armada on alert, but it only takes one nut crouching in the bushes. Can the average American afford a sniper rifle in Cincinnati anymore?

I get nervous watching these things live, because even though they’ve got squad cars everywhere, someone’s bound to screw up eventually. Can you even imagine how insane a live assassination in HD would be? People who saw it wouldn’t be able to leave the house for weeks. There’d be waves of reactionary suicides, and a whole wash of people traumatized for the rest of their lives. Oswald was shot in front of millions, but you couldn’t see a thing—a clean, clear close-up of a presidential headshot would ruin us. First person shooter sales would plummet and Xbox live accounts would be abandoned en masse… Vantage Point would be banned for years.

It’s just a matter of time. Doesn’t have to be Obama necessarily; the Tucson shootings in January weren’t televised but they easily could have been, and we’re certainly not short on crackpots. But they’re usually dumb or crazy; you get a Breivik or a McVeigh on something like this, they’d maximize the damage. Wait for the tight close-up, mid-sentence, and bang… the screams might be even more horrifying. Life would grind to a halt in every major city as gory screengrabs would spread from Twitter to Twitter, inbox to inbox, everywhere within the hour as the Big Three try vainly to suppress the tape. Who knows how long it would take for BOOM! HEADSHOT! YTMND’s to proliferate? Maybe a month?

Real-life blood and brains in 1080p would look no different than Rambo IV or Bad Boys II—we wouldn’t be able to handle it. We’re desensitized to the idea of death, but TV news is good at hiding the gory bits. To see a leader, even an elected official, die for real, Halo style; it would be even more confusing and upsetting than images of the Twin Towers collapsing. Those were impersonal, faceless objects burning far away… you could imagine the chaos inside, but you could just as easily block it out. We’ve never been confronted with gruesome death head-on like that. People wouldn’t be able to separate what they saw on CNN with the movie they just watched on HBO, or the game they just played. Irony would be dead (again), for just a little bit, and then Michael Bay would be out of a job forever. God willing.