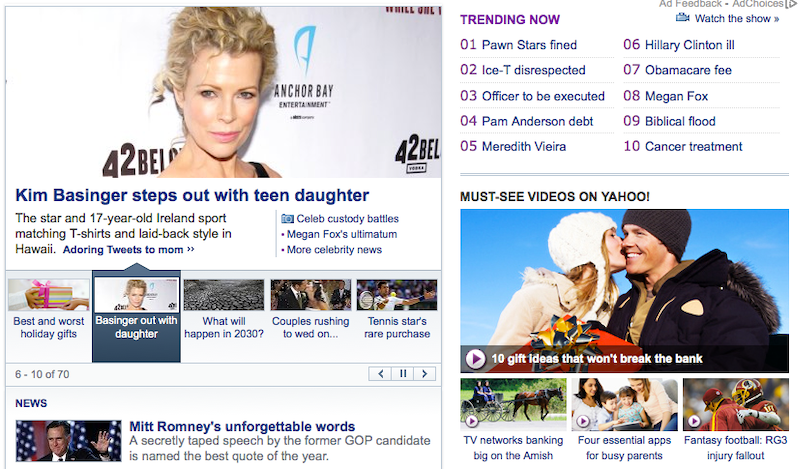 I don’t usually pay attention to “What’s Trending Now” on different search engines. I try to make the most of my Internet time for work because I don’t possess the focus to stay in front of the screen for very long before melting down. Claustrophobia and anxiety set in and I make a mad dash for the great outdoors. I do, however, resume much later in the evening. Tech overload notwithstanding, I still wouldn’t indulge in the trending news for the mere fact of their stupid come-ons.

There are exceptions. The other day, I bought into the collective consciousness of ordinary America and drank the “trending kool-aid. Here are some of these pointless topics:

First trending: “Baby Left with Pit bull.” Makes perfect sense to me. The whacked caregiver skipped out for a few beers at the local pub and everyone is worried about the pit bull? Why do they get such a bad rap? Come on, I’d take the pit nanny any day.

Early in the 20th century, the American Pit Bull Terrier was America’s sweetheart breed. Helen Keller, the Little Rascals and President Theodore Roosevelt were proud pit owners. These great family canines were especially gentle with children and loyal to a fault. Meanwhile, Buster Brown Shoe Company and a series of audio recording brands, including RCA, chose pit bulls for their mascots. Pit bulls graced the American propaganda posters during both WWI and WWII. Pit bull vs. lowlife beer-guzzling caregiver? No contest.

Second trending: “Mom Breastfeeds Wrong Baby.” Be a good sport. Remember that old adage “It takes a village?” Apparently, due to a mix up in the hospital (really?) both mothers were extremely distressed. Try Valium: it works for both the mother and the infant. In defense of the moms, I guess it may be a bit unsettling to unknowingly have someone else’s newborn attached to your nipple, but you shouldn’t lose your cool over it.

Up until the late 1800s, wet nurses were a hot commodity, and often lived at the homes of the rich and famous. Women helped women. Simple as that. Female factory workers would often nurse their fellow employees’ babies while working shifts. If someone else is gonna feed my baby, I’d much rather it be directly from the healthy faucet then some processed crap that comes out of a can. American women are so squeamish.

Third trending: “Man Impersonates Funeral Director for Engagement Ring.” I gave my diamond back when I broke an engagement many moons ago. My groom-to-be certainly appreciated that, but all women are not created equal. A disappointed Nebraska man wanted the ring back from his bride bad enough that he was willing to slip it off her finger while she was resting in peace in her coffin. Wearing a nametag identifying himself as a funeral director, this tacky guy stated that he was assigned to take the two rings off the deceased’s digits. After suspecting foul play and questions were asked, the perp got agitated. Criminal loses his cool. Dead giveaway every time.

I saw similar stories of casket robbing in Tennessee, Kentucky and Michigan. I wonder if he copped the idea from one of them or from dumbcriminals.com.