If Apple is so good, why is this place so crowded? 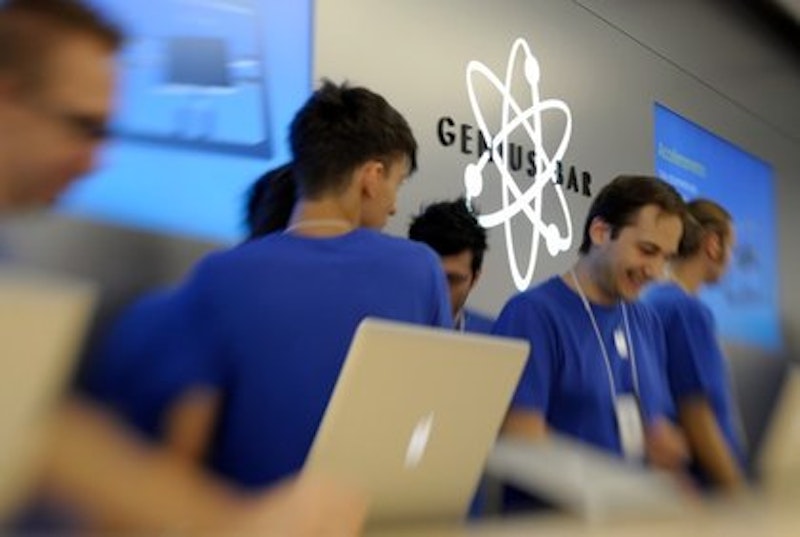 I got to the Apple Store at 11 a.m. and marched upstairs to the Genius Bar so I could get my information technology all fixed. I wasn’t done for the day until 7:30 p.m., and what happened in between was a blur. All I know is that there were elbows and noses everywhere I looked. Not once did the crowd thin out. The faces changed, but the airspace between them remained the size of a crevice. Kurt Andersen has pointed out that an Apple Store is the only place we’ve got that looks like 2001. True, but being inside doesn’t feel like 2001. It’s more like Steve Jobs decided 2001 could be turned into a subway station.

You can't fault the poor kids staffing the Genius Bar and its environs. They work like hell and don’t get snippy. Spend a day ducking in and out of the store and you’ll see the same few suspects speeding from counter to counter. They introduce themselves to yet another schmo with a laptop, then fasten their faces to the schmo’s screen and get down to business. That's what they do all day long. No chatting, no lounging, not much breathing. I asked one of the kids if it was the busy season. He detached his face from my screen and said, “No. Typical.” Then he dived back to work.

Meanwhile, customers waiting their turn swarmed about the long tables, trying to hook stools that hadn't been grabbed for a this-is-our-product seminar. People slung themselves against the chrome and plate glass that formed the second floor’s back railing; they looked at the white walls and tried to hear their names being called.

Odd. I had my laptop, a MacBook Pro, for five years and in that time it gave me less trouble than my old Dell did every three months. Admittedly, the keyboard was too petite and I’m baffled as to why they couldn’t have a real delete key and not just a backspace bar that had “Delete” printed on it. And the computer’s jewel box stylings and demure brushed aluminum got on my nerves until I stopped noticing them. But the machine ran just fine; that little fop was a worker. So why all the people at the repair shop?

My reason for being there was simple: I’m no good at computers. I needed to get my iPod (just bought) working in tune with my computer, and I also needed to install an obscure program that requires Windows, which meant that I needed the hard drive adjusted to make room for a Windows-based compartment. My pal Ganesh could handle all that in a morning at the local café, but he's been hard to get ahold of and who wants to be a pest? So I went through channels and spent the day watching hard-pressed college graduates trying to keep their heads above water.

Perhaps everybody is as stumped by computers as I am, and as short of friends with disposable time. Or perhaps Apple products are marvelously simple and reliable until they aren't, and at that point the gap between promise and performance has to be filled by people who get sweated for mediocre pay. These are kids whose admirable brains and years of schooling are now worth a job that's a fancier version of working at McDonald's.

Forget 2001, it's 2014. We thought the future would be scary but at least it would gleam. Everything would be streamlined and ominously simple, and at last a soft-voiced computer would tell us all was done, lights out. Instead everybody is as frazzled as ever, and we pretend life is frictionless because we can look at our portable screens and see a three-legged cat (or Julia Roberts' IMDB listing, or the catalog of the Library of Congress) seconds after the impulse to find it crosses our brain. Then the pretense breaks down and we must take our screen and its apparatus in search of an exploited work force to get us right again. Life is the same old crap with some noisy gimmicks added to the mix. The future is here, and as so often it's a bad sequel.