Why Are People Slaves to Abercrombie & Fitch? 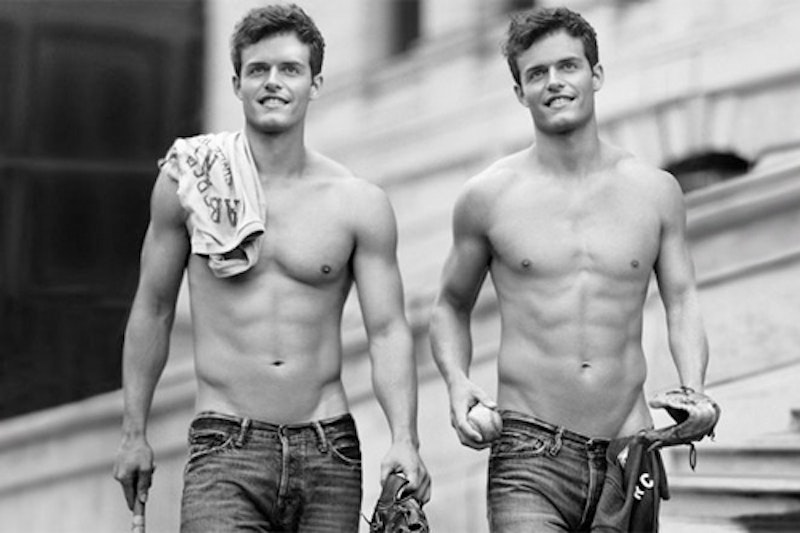 Last night I was runway walking down 5th Ave. in Manhattan, queening out to the new Lady Gaga record, when all of a sudden I couldn’t breathe. Out of nowhere I just started gasping for air. Scary stuff! But don’t worry, everybody—I’m fine. I just got cologne-topped by the 39,000,000 gallons of scent the Abercrombie & Fitch flagship rapes everybody with who walks by it. Don’t they do this in the malls, too? I guess I’d better bring a surgical mask with me the next time I feel like taking a quiet stroll down 5th Ave.

Walking past the Abercrombie store, arrested by the way it smelled, something so invisible yet so potent as scent, I started wondering what Abercrombie sells in the first place. The fact that the smell of a clothing store gave me pause—when what should make me stop are the clothes—shows Abercrombie’s biggest success tool and most annoying trait: myth.

And the myth is why I hate Abercrombie & Fitch. I hate it because people wear the stuff and instantly disappear into that California beach look, thinking they’re cool. I hate it because dudes who are 45 should not be allowed to wear it. I hate it because one too many gays/dudes has “Abercrombie” or some variation embedded in his AIM/Manhunt/Myspace screennames and, like, what’s that about? I see all you Abercrombie Queens out there in your $92 dollar ripped jeans, gray “1892” t-shirts, seashell necklaces and brown flip flops. This is the hottest outfit at any high school or gay club in America, which I guess makes a lot of sense because gay clubs are a lot like high school, so.

But I didn’t always hate A&F. In fact, as a teen I was pretty obsessed with the stuff. The shirtless, Rugby-playing bros in the ad campaigns actually made me gay, not genes, and at the time I thought the only guys I could ever like had to look like them. There was something epic about paring a clothing label, whose clothes aren’t really that great, with black and white American, homoerotic imagery. No other clothing label, besides maybe Tommy Hilfiger or Ralph Lauren, managed to tie the myth of the “lifestyle” and the actual clothes together so well.

Then I started reading this gay culture magazine (not porn!) for twinks like me called XY. Any gay dude who came of age in the late 90s knows about XY. Well, XY always had pictures of cute boys in various A&F ensembles, tricking me into believing that gay = A&F. At that point I decided I needed to become one of them. If you follow Lacan, we fashion ourselves after what we desire, or something like that. So I filled out god knows how many applications to work at an A&F in the local mall, and I’m still waiting on somebody to call me back.

When I couldn’t get a job there, I begged my parents to buy me this forest green Abercrombie winter coat. The coat wasn’t that fabulous, but I was sure to pick one that had the words ABERCROMBIE emblazoned on it in all caps so I could say I was an Abercrombie Boi. I seriously thought that magical coat would make me the hottest piece of ass on campus. All the cool kids had some kind of Abercrombie something, and I wanted to be just like them.

But I didn’t become the hottest piece of ass. I was just a skinny nobody in a big green coat. I didn’t know that as hyped as Abercrombie was in my circle of friends, it was never about the clothes. It was never about me at all. It was always a one-sided transaction where Abercrombie sold a certain kind of WASPy frat boy or sorority girl image to me, laughing because they knew I would never become one. I never got anything back.

It’s not that I don’t buy into myths, because American consumerism is about nothing if not selling fantasy. But not all myths promise as much as Abercrombie does. It’s probably the only American mall-brand to claim such a deep cult following. If people describe themselves as an “Abercrombie Boi,” they are saying something very specific about their background, aspirations, desires, and attractions. Nobody says, “I’m an H&M Boy” because arguably H&M doesn’t have a myth to go on. It’s just clothes.

Abercrombie, on the other hand, could stop selling clothes right now and people would still be dying to get next to it. There is always a ridiculous line down the block no matter what day of the week you walk past the A&F store on 5th Ave., if you can manage to keep walking without getting cologne-topped. What are these people waiting for? They likely have Abercrombies in the malls where they live and have seen the clothes before, so why the wait?

Just this week, A&F opened its Parisian flagship on the Champs Elysées, celebrating the occasion by unleashing 101 shirtless male models to roam free in nothing but ripped jeans and flip flops. Now you can go straight from the Arc de Triomphe to Abercrombie & Fitch. How’s that for globalization!