A few storms in the right place may make the elites sit up. But it's a gradual process. 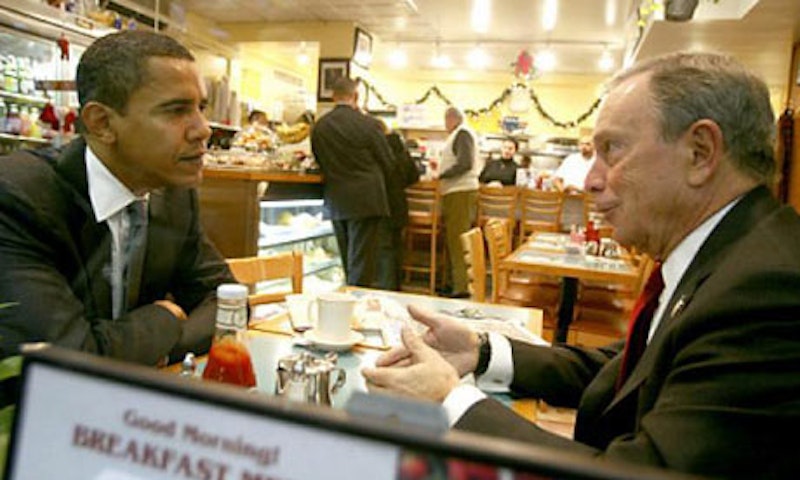 My nonexistent Twitter account (@BlindfoldedCagliostro) had this Tweet ready to go: “Big Sandy gives Obama 2nd term and also 2nd term agenda. Regular floods, rubble = Save us from global warm.” But the Sunday talk shows came and went with nothing about Sandy as proof of climate change. All right, we're looking at a gradual process of conversion. There will be more storms, including more storms aimed at the East Coast, and global warming will morph from a high-toned but remote subject to an up-close and terrifying crisis. Last week we saw some early signs of the change in elite opinion.

The political, financial and media elites happen to overlap in the person of Michael Bloomberg, mayor of New York City and founder of the Bloomberg news empire. Slapped hard by Sandy, Bloomberg has lurched into a new mode of consciousness. It's like his regular one but with a key difference. Until last wee Bloomberg believed that global warming was real and a problem, but he also believed (I think) that New York wouldn't suffer any repeated crises involving extreme weather. The second belief never made sense and now it's gone. It leaves Barack Obama looking very good to the mayor.

After a year of talking about the President's shortcomings, Bloomberg has now endorsed him over Mitt Romney. Why? “One sees climate change as an urgent problem that threatens our planet; one does not.” Yes, Bloomberg throws in some more reasons (abortion, gay marriage). But they didn't add up to an endorsement until Sandy. Leadoff point in the mayor' statement: “Our climate is changing.”

The oddest thing: Bloomberg doesn't point to Obama's performance during Sandy. That at least would be late-breaking evidence. Instead he points to steps taken long before: “setting higher fuel-efficiency standards for cars and trucks,” “tighter controls on mercury emissions.” And nothing about the attempt to pass cap-and-trade. It's like Obama is at least on the right side of climate change, and Bloomberg wants a climate change candidate and fast, so he'll take anyone who qualifies. As it happens, Obama is the only one in sight.

Bloomberg might have noticed before, but it was too much fun dispensing pox-on-both-your-houses centrism. Even now he makes Obama his whipping boy for all the bad vibes that have come out of Washington. In his endorsement, the Mayor says Obama has “devoted little time and effort to developing and sustaining a coalition of centrists… doomed hope for any real progress…  engaged in partisan attacks... focused more on redistributing income than creating it.” But what the hell, at least Obama recognizes what's crazy and what isn't on the climate issue.

Of course, this means that the other party put up a candidate who sees no reason to avoid insanity. This is the same party Obama has had to deal with all these years, so you'd think he wouldn't be to blame for all the partisan division. But the mind of a really determined centrist becomes clear only by degrees.

Chuck Todd's matter-of-fact mention. Another incident. A cable news personality on MSNBC rattled through the morning's news and told the audience that, come on, these big storms have a cause.

“Second year in a row the New York Metro area hit by this stuff,” Todd told viewers on last Wednesday’s Daily Rundown. He was being brisk. “Let's not bury our heads in the sand when it comes to—something has changed in the Atlantic. The climate has changed.” Then, with a lunge toward plain speaking: “It's called climate change, folks.”

All the while he had cable-news glyphs and digital picture rectangles floating in the left side of the screen, and behind him was a backdrop consisting of the White House divided into other picture-rectangles. I think New Age cocktail jazz was playing, the sort of thing you hear when reviewing a motel's options for cable movies. In short, the screen showed the usual crowded but soothing environment you find on cable news in the morning. Except Todd was saying “The climate has changed.”

The mention came in the middle of standard election coverage: “Move Minnesota, move Wisconsin, see what that leaves” and “But then you have to look at the campaign body language” and “The bottom line is they're both right.” The scene was like watching a TV newscaster in an old movie saying that Godzilla is here but let's talk about what's going on in parliament.

Lesson. Before Sandy, the four campaign debates went by without a word about climate change. That was fine with everyone but the greens and some liberal soreheads. Now Godzilla has at least been mentioned, and he's scared a fairly vain billionaire mayor into climbing down and making a choice.

So how do you create a major political issue? Just take a lot of water and air and send it barreling toward your country's major media outlets, its financial center and its political capital. Throw in devastation for the regular people, as a sign that there's a toll to come. Warning: The process may have to be repeated.