The Rise of the Clone Town 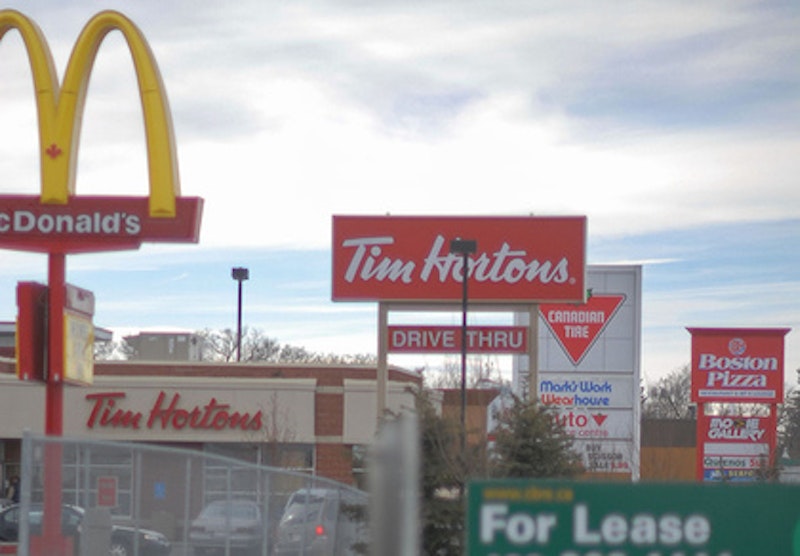 Within a five-mile radius of London’s Oxford Circus underground station there are 161 Starbucks outlets. Talk about convenience, right?

While living in New York’s west village, I could stand on a certain corner and see four Starbucks at once—one in a Barnes & Noble, another across the street by a Staples, another up ahead in an NYU building and one more that’s in a museum. After a little angry investigation I found out this remarkable fact: they were all busy. Somehow, people needed all four.

If you’re ever in Seattle you can visit the original coffee shop near the city’s famed Pike Place market. Like many of the eclectic shops around there it’s a really hip, cozy, bustling place—with its big bright glass windows, outdoor tables, and green-copper trim and worn, old school sign. I can see why people like it. In 1987 Howard Schultz took over the struggling 11-store chain with the aim of spreading the brand to places not used to premium coffee. Before he became CEO he called himself “global strategist.”

One of the original Starbucks founders, Gordon Bowker (who also co-owns Pete’s Coffee and Tea and Redhook Brewery) said in a recent interview that as an avid reader he is more obsessed with the histories of the Roman Republic and Empire than business development.

As of 2006 Starbucks had spread their little coffee house to 13,168 locations across the world. Like a seed taking root everywhere, Schultz and Co. took their tiny piece of old-time Seattle and put it in Kansas, Kuala Lumpur and Timbuktu and saw that people responded, big time. Their goal—until the recent worldwide financial crisis—is to supplant McDonalds as earth’s most ubiquitous brand in the next five years, opening eight stores a day till they have over 40,000 stores in every corner of the globe.

But what does that mean for us? What is happening to the soul of our towns? Do we care about what makes them unique? What makes New York New York and not Chicago or Tokyo or Buenos Aires? Is it the smell of roasted peanuts in Union Square? The boutiques in Soho, the hippies and the rats in Washington Square Park, the ferry fumes in Staten Island? What will keep New York from becoming what most of Main Street America has already coalesced into—a convenient but soulless series of interconnected malls?

Los Angeles Times columnist Steve Lopez wrote a clever little piece on Sarah Palin’s “small town” paradise of Wasilla that hits it on the head.
The scenery on the drive to Wasilla is stunning, with jagged snow-capped peaks and dense birch forests. But if you travel this way, do not make the mistake of thinking you're about to enter a quaint mountain village. Some towns have character. Some have a sense of place.

And then there is Wasilla, which greets visitors with Wal-Mart, Target, Lowe's, Kentucky Fried Chicken, Carl's Jr., McDonald's and Taco Bell.

They paved paradise, and all they've got to show for it is chalupas and discount tube socks.
He goes on:
I pulled into a strip mall parking lot, with a giant “Congratulations Sarah” sign on a storefront and asked a woman for help.

“Ma'am, can you direct me to Main Street?”

“This is Main Street,” she said.

“Well, where is the center of town?”

“This is downtown Wasilla,” she said.
I like pestering my grandparents about what their parents and grandparents did when they came to the U.S. Like many Americans, I come from a line of skilled foreigners who opened their own small businesses once they arrived: we had a Hungarian Kosher butcher shop, a haberdashery, a house painting business, a cigar shop, an Italian bar and restaurant, you name it. It makes me wonder if they would have made it in these times when people can get meat, underwear, paint and beer at Wal-Mart in one fell swoop.

British think tank The New Economics Foundation (NEF) gave a name to the concerning chain phenomenon that’s taking over our urban environments. Its called The Clone Town. As Jessica Williams describes in her book 50 Facts That Should Change The World, The Clone Town emerges when “smaller commercial centers, among them many ancient market towns, have started to lose many of the features that made them representative of the areas they served.”

The NEF documents that in Britain, between 1997-2002, specialist stores like butchers, bakers and fishmongers were shutting up shop at a rate of 50 a week and 20 traditional pubs closed their doors. In their place came mega supermarkets, and chain retail and franchise bars. Williams writes, “[F]or every 7 pounds of retail spending in the UK, 1 pound is spent in Tesco supermarkets.” That’s enormous power. With a workforce of over 1.2 million and annual profits in excess of $300 billion, Wal-Mart could have a standing army and a gross domestic product to rival many nations.

In many ways a city or a town is like a person—it has a history, a sound, a personality and look and feel all its own. While New York retains some of Europe’s vibrant cramped, crooked streets, sizzling street food and bohemian spontaneity in its many parks and squares, Chicago has a cleaner, open, and definitively more modern layout. The wide grass prairie is still in its bones – the great lakes and the Mississippi river flows in its blood. Thanks to the devastating fire of 1871 which leveled most of the wood-tenement downtown, local architects, community leaders and developers came together as the ashes were still smoldering to create a new kind of metropolis—a city of grids and steel, of glass and stone, of light and technology—with structures that stretched to the sky undaunted by wind and weather; a glorious place that could withstand the claws of time.

Having recently studied in Prague, I was disheartened to see the 16th century splendor of the royal castle and the cobbled Charles Bridge give way to a neon façade of Subways, Long John Silver’s and Pizza Huts/Dunkin’ Donuts/Baskin Robbins’ three-headed monsters. When I asked local Czechs about this development they just laughed it off: “The iron curtain has indeed lifted with a vengeance, eh?”

I went to college in Ann Arbor, Michigan, a town that lives and grows around its young college population and has done an impressive job preserving its originality by instituting city ordinances against over-development and fast-food construction, saving various historic landmarks from the wrecking ball. While places like the grungy and majestic Fleetwood Diner or Krazy Jim’s Blimpy Burger stand out, the crown jewel of A2 is the Michigan Theater, a magnificent restored 1920s movie palace and concert hall with one of the last remaining Barton Pipe Organs still working in the country. It’s common knowledge that several times the theater was planned to be converted into a food court or a parking structure and if it weren’t for group of concerned Ann Arborites in 1979, who started the Michigan Theater Foundation, it would no longer be there.

Unlike Ann Arbor, other towns with similar original historic landmarks aren’t as lucky. When I return to my hometown of Evanston, IL, another college town, I am amazed to see how quickly it has changed just in my lifetime. It was once a relatively sleepy and artsy suburb of Chicago, but walking up Sherman Ave., one of the main drags, I am amazed to see 30-floor condos rising up into the air—glittering Whole Foods Markets and Border’s Books and Jamba Juices ensconced at their feet. Traffic snarls. A skyscraper is being planned for Fountain Square. During one stretch on Sherman I didn’t see one store that wasn’t a chain or a franchise.

Within the last few decades all the small theaters, including movie palaces The Varsity, art deco masterpieces like the Coronet, and vaudeville-era treasures like The Valencia have been removed or replaced by mixed retail. A massive multiplex is Evanston’s heart. Classic venues that my father used to attend like The Amazing Grace Coffee House/Collective, which featured artists as diverse as the Grateful Dead, Charles Mingus and Muddy Waters, have been leveled and replaced with strangely faceless Soviet-era-looking apartment complexes. While I have fond memories of the place, I feel little affection for the town now when I visit.

Why not embrace and preserve our history instead of decimating it and putting in one more food court with a Panda Express, Sbarro’s or Wendy’s?

Think about it. Is this the bland world we want to leave to our children?