The Non-Art of Letting Go

The purge: trash, trash, everywhere it shouldn't be. 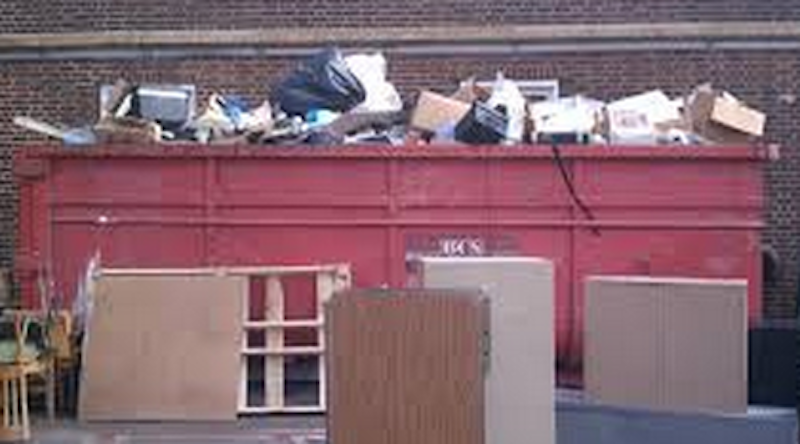 One of the biggest accomplishments of Contagion, Steven Soderbergh’s epidemic epic, is how the movie succeeds at conveying information without hitting the viewer over the head with it. Consider the scenes where trash-lined streets are used as backdrops because, it’s assumed, this plague that’s wiping out humanity had disrupted the social order to such an extent that the center cannot hold for the institution of garbage removal, or else all the garbage collectors were long dead.

I’ve been thinking a great deal about trash for the past few weeks, and the last few days in particular, because Bucknell’s academic year has wound down and Lewisburg now resembles an expanded Contagion set. Dumpsters are overflowing everywhere, some stationary but many more obviously rented for purging season. Bulging garbage bags loiter at corners alongside broken chairs and orphaned wooden drawers and wastebaskets. Across the street from my apartment a painted, Bucknell soccer-associated mural is up for grabs; there’s also a bedspring and a heap of half-empty boxes. In the alley next door to my apartment there is a dumpster buried in unwashed clothes that looks as though a Marshalls threw up all over it, twice.

Complaining about this sort of mass dump can feel petty, on some levels; after all, we left quite a pile behind when we left Round Rock a year or so ago to move back up north. On the other hand, we’re adults in our mid-30s who have a child and who were tasked with transporting my in-laws’ not-inconsiderable belongings; we’d also moved a lot, had become expert at cramming stuff into Ryder trucks, and made a point of discouraging hoarding in ourselves.

I have a lot of shortcomings, but a lack of practicality isn’t one of them. So it was never impossible for me move after a year at college, because I was always returning to Owings Mills in the late spring in the automobile I’d driven to Chestertown in the early autumn; if I’d accumulated extra weight, it consisted of a few books and CDs, some paperwork. Of course, my dorm room décor was always nonchalantly threadbare—which may explain why nobody ever bothered to come to visit me.

Note that phrase: “dorm room.” I always lived on campus. It’s possible, even likely, that the off-campus students flew into a panic when May rolled around, but I never saw it. I can’t recall Middle Hall or Kent or Cullen being turned into a mass landfill because some moron couldn’t fit her wicker living room set into a Ford Explorer or some dweeb opted to ditch his regrettable collection of psychedelic posters anonymously in a stairwell. I can only think of two large things I had to get rid of, both of which I sold: a mini-fridge I’d initially gotten from a classmate but never actually paid for (sorry, Lora), and a couch that a close friend gave me that I probably caught lice from.

Anyway, by early Sunday afternoon—graduation had taken place in that morning while numerous loud, drunken gatherings marked by pavilions and amplifiers and abandoned red cups had erupted on Friday and Saturday evenings—the stragglers among the departing pilgrims were hustling. In many cases, reinforcements had been called in; entire families figuring out how to dismantle collegiate lives, get the important shit home, throw away the inessential. By late on Sunday afternoon, rubberneckers were sifting through bags and dumpsters without shame. Admittedly, I eyed a set of stackable containers and a stray desk down by the stream; from a distance, they were enticing, but up close, they were a scuffed, busted-up mess, and there’s something distasteful about the idea of bringing a stranger’s refuse—shit they were willing to throw away except that the excuse of “free” lets everyone off the litterbug hook, or so it seems—into my home while I’m in the process of reinventing my life.

Someone had balanced an ancient television set on a ratty old couch along the route I take to Lewisburg Freez; in Round Rock, where out-of-neighborhood strangers are constantly cruising for giveaways or potential cheap buys, both items would have been gone in two to three hours, en route to a new life. In Lewisburg, where there are fewer opportunists, they’ll simply fester on the curb until the garbage collectors get sick and tired of looking at them. I’d like to make some grand statement about a) empty, disposable consumerism leading us to take cheaply acquired, utilitarian possessions less seriously that we did generations prior, or b) the pointlessness of over-decorated student living arrangements when such conditions are, inherently, wasteful but 2005, 1999, 1983, 1972—it was likely always thus, and will likely always be thus.