The fight for a Smoke-Free Texas. 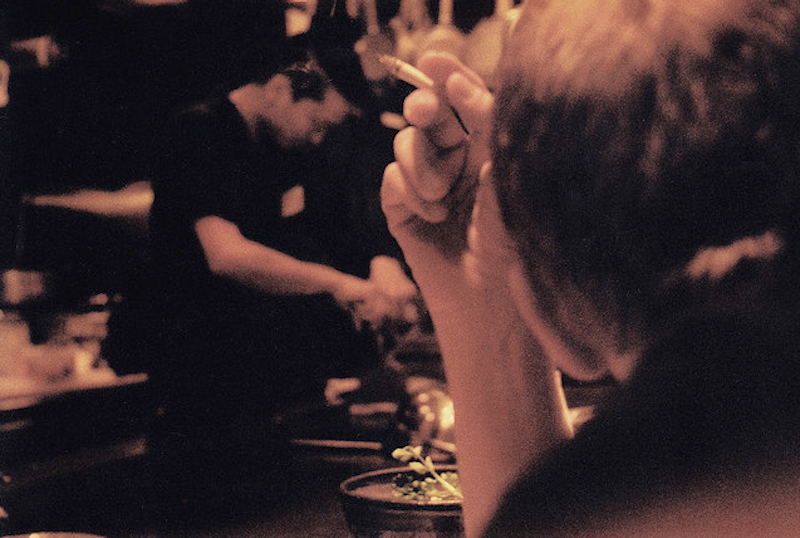 The infraction here is naïveté. I’d thought the battle smokers waged against state governments that banned lighting up in almost any public place was lost a long time ago. Not so: according to a blog post in the weekly Dallas Observer last week, some restaurants in Texas still offer sections for smokers—societal lepers just a rung above pedophiles and FOX News talk show hosts—and they’re currently in the crosshairs of a statewide movement (via Smoke-Free Texas) to prohibit puffing in restaurants and bars. No knock on Texas, which is among my five favorite American states, but it figures that the zealots there are just getting around to this issue in 2011. This is a territory, after all, that allows the religiously-minded to bring guns into houses of worship, which I find very weird.

Beats me if writer Hanna Raskin has any official armadillo in this skirmish, but she needlessly scolds the country’s remaining miscreants—20 percent of Americans currently smoke, compared to 57 percent of all males in 1955—with this debatable sentence: “Even most smokers don’t like their food seasoned with stale cigarette smoke.” She goes on to a cite a Greek study of 62 soldiers which found that the smokers among them had the affliction of flat taste buds, which means, at least by Hanna’s reckoning, that they can’t “appreciate the nuance of lavender; the shading of a delicate cream sauce and the subtlety of expertly crafted olive oil.” And then the kicker: “A non-smoker stands a good chance of becoming a food lover… It’s hard to imagine a generation with dulled tongues getting aroused by raw milk cheeses and single barrel whiskies.”

Never mind that residents of France, where the cuisine is somewhat more adventurous and complicated than the fare offered in Dallas, didn’t just discover cheese—hundreds upon hundreds of varieties—since the decline of tobacco use in their own country. Or Italians and olive oil, Belgians and chocolate, the Irish with a perfectly pulled pint of Guinness… you get the idea. Pardon my impertinence, Hanna, but perhaps that the American “fetishization of food has taken off as smoking has plummeted” has more to do with the fact that until a generation ago the United States—save for regional dishes prepared with local ingredients—was a culinary backwater. Really, even in Manhattan as recently as 1970 the only Chinese food available was dull Cantonese and “pasta” was still called spaghetti.

As you might’ve guessed, I’m a moderate smoker who takes minimal offense at Raskin’s assault on my taste buds. But that’s not really the point: what amazed me from this short article is that there are still some establishments in America where it’s permissible to smoke. I’ve long become accustomed to my status as an outcast, and you adjust. When smoking was first banned in bars and restaurants in New York in the early 1990s I was of the mistaken opinion that business would suffer. It didn’t happen; the only losers were bartenders who were victimized by unscrupulous patrons who’d go out for a smoke and then toddle off without paying their tabs.

In fact, the last really nasty contretemps I engaged in over the question of smoking in a restaurant occurred in 1987 at a now-shuttered Mexican joint in West Baltimore that I frequented about once a week. I’d just finished supper and was chatting with my dining companions Joe and Joan and, instinctually, lit up a Merit. Almost instantaneously, a self-righteous woman several tables away, waving her hands vigorously to eliminate the smoke, sauntered over and said, “If you want to kill yourself with cancer sticks, that’s fine with me, but if you don’t put out that cigarette I’m going to leave and skip dessert.” Not missing a beat, Joan replied: “Well, judging by the size of your ass it’s a good idea to knock out the sweets.” This struck me as hilarious, and it was worth the uncomfortable vibe that was ignited, as some customers sided with the interloper whose intact taste buds contributed to her girth, and others who felt empowered to contribute more “stale smoke” to the restaurant.

My kids (who don’t approve of the old man’s habit) can’t recall a time when smoking was allowed on airplanes, in supermarkets, hospitals, college classrooms, ballparks, the occasional movie theater, and when every home had an ashtray. If my own memory wasn’t every bit the equal of Babar’s, I probably wouldn’t remember that era either, it’s been that long. And frankly, I’m not complaining (although the ban in hotels really sucks), since it cuts down on my consumption of tobacco. After getting off a plane or train, I’m like a whipped dog, a kid in the corner with a dunce cap, joining a cadre of almost-criminals for a nicotine hit. What the hell: you quickly adapt to a fickle culture but how many times can you beat a dead camel?