Ramen on the Rise

The college standby is becoming more gourmet, and more popular outside Asia. 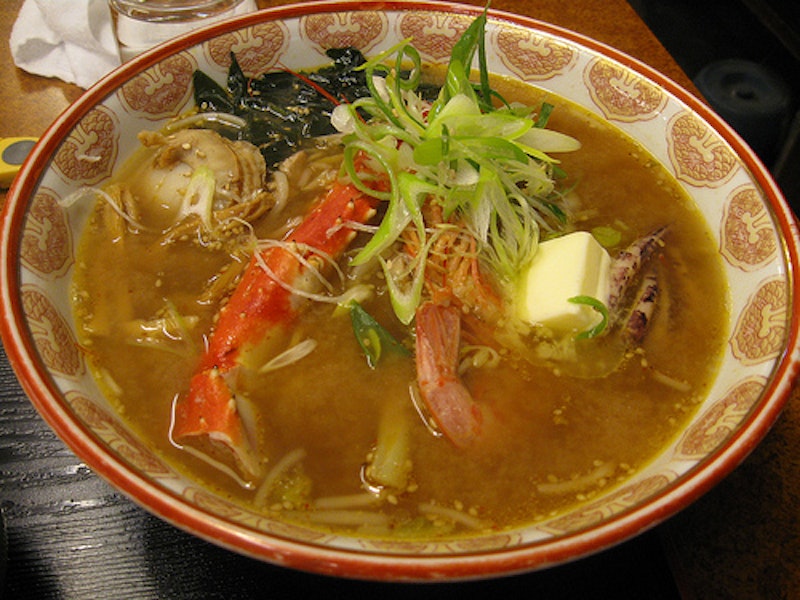 Ramen is having a renaissance. The archetypal Japanese noodle soup is currently the subject of a book, a movie, and scores of websites. It has hundreds of thousands of dedicated aficionados and has been taken by an astronaut into space. Long popular in Japan, ramen is now, like other aspects of Japanese pop culture, becoming increasingly chic in the West as well.

More and more niche and gourmet noodle shops are opening in the States, and a ramen subculture is forming. While America once thought of ramen solely in terms of the instant variety—cheap, fast and low-brow—today American foodies, particularly young people, are enthusiastically embracing the gourmet complexities of a soup that until recently was associated more with broke college students than with serious eaters.

"Ramen seems like a simple dish: it's just noodles in soup with some toppings," says Ed Wu, who runs the website Ramen Ramen Ramen from his home in Southern California. But the Japanese ring an amazing array of variations on that simple theme, he explains.

There are different soup bases, such as shoyu, or soy sauce; tonkotsu, or pork bone; chicken; and miso. There are different types of noodles. There are dozens of traditional topping possibilities, including pork, egg, seaweed, green onions, fish cakes, kimchi, ginger, raw garlic, bean sprouts and bamboo, that are added in specific combinations based on the style of ramen being served. "Every region in Japan seems to have their own local version of ramen," Wu says. "And every ramen chef seems to have his own carefully cultivated secret recipe."

"Real" ramen is in a completely different league from the instant stuff. Many serious ramen restaurants have recipes that require days of preparation to make a batch. Anyone who's ever seen the two most famous ramen movies, the classic "noodle western" Tampopo and last year's The Ramen Girl, realizes what an excruciating, time-consuming process perfecting a ramen broth is. High-quality ingredients are not enough, these movies contend. A serious passion for ramen is also required. For Americans who have been raised on instant noodles, it often takes a trip to Japan to reveal ramen's enigmatic allure.

That was the case for me. I was a childhood fan of instant Top Ramen and as an adult secretly relied on the stuff to deal with romantic breakups, but I'd never taken ramen seriously until I visited Japan last year. There, ramen is mostly seen as fast food, costing between $5 and $9 for a large bowl, as opposed to less than $1 for the instant variety. But it's a revered fast food, much like the hamburger in America.

Dozens of ramen stalls are tucked into the streets surrounding busy train stations, and crowds of salarymen dash in for a quick bowl, eaten standing up—taking care not to splash their ties—before heading back to their homes in the suburbs. After consuming a few bowls in Japan, I joined the ranks of ramen fans.

Rickmond Wong, whom the Los Angeles Times called "the rock star of ramen" because of his meticulously maintained ramen review site, suspects that ramen's rising popularity correlates with the trendiness of anime, manga, and other aspects of Asian pop culture. Ramen prominently figures in the manga Ramen Hakkenden, about a salaryman who secretly moonlights as a ramen seller, as well as in the anime series Naruto, where the protagonist, Naruto, is named after the pink and white fish cake that's a standard ramen garnish and lists ramen as his favorite food. A popular manga in Japan, Oishinbo (which means "The Gourmet"), began releasing English versions of their comics in the United States this year. One of the first, Ramen and Gyoza, is about a man embarking on a mission to find "the soul of ramen."

"Like anime, ramen is a kind of foodie version of otaku (geek) culture," Wong speculated in an e-mail interview. "It lends itself well to such consideration. There are so many noodle variations that people tend to obsess over the style differences, the best ramen shops, etc. Plus there's this image that ramen is not particularly healthy or good for you; it's the fast food of Japan. Anything with such a stigma attached to it only makes people fascinated with it more."

Ramen's growing popularity is perhaps nowhere more apparent than on the Internet, where food blogs focused on ramen have proliferated. "Ramen brings the geeks and pop culture junkies out of the woodwork, and these folks are usually highly computer literate," Wong explained.

Luckily for the ramen-obsessed, it's become increasingly easy to geek out about the soup. Hundreds of posts on Chowhound dissect the ramen in ramen-ya's across California, industriously ranking them and comparing in minute detail the offerings therein. Blog owners across the globe document their owners' fanatical addiction to the savory soup. Ed Wu helps support his ramen jones by selling lapel pins on his site shaped like bowls of either shoyu or tonkotsu ramen. Nate, the proprietor of the Waseda Ramen blog, details his ongoing effort to sample the wares of every one of the 80 ramen shops in an area of Tokyo he dubs the "ramen challenge zone."

Of course Japan is ramen ground zero. In Tokyo the ramen shop Fujimaki Gekijo offers a bowl for 10,000 yen, or about $100; it's rumored to contain foie gras. There's a ramen museum in Yokohama that, in addition to typical museum displays documenting the history of all types of ramen (including instant) and a souvenir shop selling ramen paraphernalia, also features a historical theme park cum food court. The two underground levels of the museum are designed to look like Tokyo in 1958, the year that instant ramen was invented and before modernization took hold in Japan. The most renowned restaurants from across Japan serve bowls of ramen that stylistically correlate to the regions they hail from, while Japanese music from the '50s is piped in.
Another ramen museum outside of Osaka, dedicated to the making of Top Ramen and Cup Noodles, the jewels in Nissan's ramen empire, convincingly presents the invention of instant ramen as one of the greatest achievements of mankind.

But ramen hounds don't need to travel to Japan to feed their addiction. California and New York are hotbeds of ramen obsession and gourmet ramen eateries, where a bowl of $20 ramen is not unheard of. But in California's South Bay, long a ramen hot spot, the soup experience can be a manageable affair. Many restaurants there serve nothing but a few types of reasonably priced ramen (ranging around $7), and you're expected to eat and leave immediately to make room for the queue of people inevitably lined up outside.

In Southern California, restaurants have been making waves with their California fusion approach to ramen. Ramen California in Torrance is known for packing garden vegetables into their soup and for including other unlikely ingredients, such as reggiano cheese and heirloom tomatoes. In New York City two Tokyo ramen chains have opened branches recently, Setagaya and Ippudo NY, converting a new wave of Gen X-ers into ramen lovers via their pricey and delicious modern-traditional gourmet offerings in elegant East Village digs.

Every bowl at Ippudo NY is an experience, one that usually begins with a one- to two-hour-long wait outside and culminates with a rich, nuanced soup that the restaurant describes as a "micro-cosmos in a bowl." I got the "first anniversary special," which came with a yuzu fruit and pepper side that is meant to be added to the bowl halfway through to give the the soup a new flavor—it's two bowls in one! There's also the option of adding another round of noodles to the remaining broth once the noodles are finished, for those who can't get enough. Some of Ippudo's soups have a layer of fat on the top that, while repulsive looking, is declared "orgasmic" by fans. If you're in New York and looking for a bowl of ramen that will change your life, Ippudo NY is the place to start.

Someone who knows firsthand about the life-changing qualities of ramen is Andy Raskin, the author of The Ramen King and I: How the Inventor of Instant Noodles Fixed My Love Life, a novel about his struggle to recover from sex addiction through the higher power of Momofuku Ando, 1910-2007, the inventor of packaged instant ramen and Cup Noodles, nee Cup O' Noodles. Raskin's obsession with ramen is inextricably connected to his love of Japanese women, culture and the country's food-related manga, particularly a comic called Ramen Discovery Legend.

Raskin was a featured speaker at a recent San Francisco event "For the Love of Ramen" put on by the Asian Culinary Forum and the Culinary Historians of Northern California, which also featured NYU assistant professor George Solt, who discussed the historical roots of ramen. The ramen geeks were out in force for the sold-out evening, greeting each other by name during the intermission. From the snippets of conversation I overheard, most revolving around food and anime, the crowd clearly represented a cross-section of ramen junkies and Japanese pop culture fanatics (or weeaboos, as Caucasians obsessed with Japanese culture are often derisively called). One fellow had affixed his long dirty-blond hair in a bun using a pair of chopsticks.

In the coming years, we'll no doubt be seeing more ramen geeks around the country. Although instant ramen has long been popular in America, selling over 14 billion units in 2006, the more expensive, more complex original version is finally elbowing its way to the table. And as more ramen-yas open branches in the States, high-end ramen is poised to become the latest Asian food fad to hit mainstream America and get people slurping.