What’s the deal with the explosion of prep/ivy style blogs? 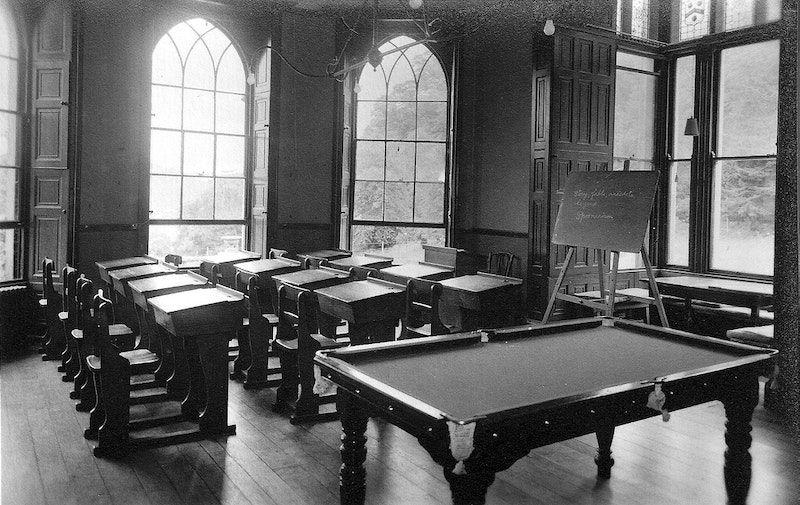 I lived in Japan for the summer of the year 2000. I was studying Japanese under the mistaken impression that Japanese society turned on contemplative staring at rock gardens and pithy Zen witticisms, with brief breaks for stoic Samurai jaw clenching. This did not bear out. I found that Japanese people concerned themselves with the exact same things that Americans did: locating a decent hamburger, picking out trim levels on inexpensive Japanese sedans, finding jeans that fit. You know, shopping. Since this was an immersion experience I followed their lead and divided my time between behaving well on tours of temples and visiting department stores.

In Kanazawa I came across a mahogany rack of rugby shirts surmounted by a pair of crossed oars. The oars met over a block legend: FOR GOD, FOR COUNTRY, FOR YALE. I took a picture (with film! It was 2000!). What, I wondered, were the Japanese doing with this starchy Ivy League slogan? Hadn’t they run into some trouble with the “for god and country” line in the 1940s? Well it turns out that the Japanese love American WASPy clothing. They snap up moccasins by Quoddy and monstrously expensive bluchers from Alden. J. Press, the classic ultra-conservative Ivy League haberdasher, does a brisk business in Japan. The recent Americana clothing trend has been booming there for years.

It’s not too surprising—the Japanese love American culture and they love a well-defined sartorial aesthetic. Ivy League style, which paints a relaxed and faintly disheveled veneer over the luxurious clothing of the American ruling class, brings an easily identified and reproduced look and a heady whiff of wealth and privilege. See the recently republished Take Ivy for a very early example of Japanese interest in American collegiate dress: the book, which debuted in 1965, collects ever so faintly homoerotic photographs from the campuses of a few Ivy League schools. Blond giants strut confidently through gothic arches, shod in penny loafers, clad in chinos.

I kind of understand why young Japanese men would pay $300 for a pair of handmade leather boat shoes from Quoddy. Americans can get them somewhat more cheaply, but not that cheap—I own a pair in black Chromexcel leather and they’re sublime, but took six months to arrive, supposedly because Quoddy’s ancient workshop in Maine is so busy with Asian orders. And I can see why young Japanese men might put these boat shoes into a clothing aesthetic that draws equally from Holden Caulfield and Amory Blaine. I find it much harder to understand why Americans would want to do this.

The Ivy League or prep aesthetic comes from a specific part of America, after all, and the men (and women) who wore these soft-shouldered blue blazers and Weejuns for most of the 20th century were not always as forbearing and gentle as their careful dishabille would imply. For an American, or at least for me, the Ivy League style carries a scent of elitism, not to mention puerile, athletic cruelty. The Ivy League standard of khaki chinos and blue blazer grew out of boarding school uniforms, after all, and it can’t help but look a little boyish and, from time to time, a little thuggish even on men who have been wearing it for longer than I’ve been alive.

I went to a prep school in Connecticut, and I then spent 10 years at Princeton. In the early 2000s, when I was an undergraduate, wearing preppy or ivy league clothes on campus signified membership in one of two groups: the sexually ambiguous Exeter and Andover alumni, or the college Republicans (often both). On occasion you would see someone wearing Nantucket red pants and four or five pastel polo shirts at once, but this was understood to be a statement of smirking irony, a burlesque. Most of us wore jeans and sweaters. The engineers all wore Dockers and heather gray gimme t-shirts, tucked in. More bohemian types turned to Italy or France for their sartorial cues. I knew a Hawaiian guy who wore a parka year round.

At any rate no one seemed to confuse clothing and lifestyle. Recently I’ve been reading a bunch of interconnected clothing blogs that focus on prep, or Ivy League, or whatever you want to call the clothing style. In the words of Kids in the Hall character Manny Coon many of these blogs make me feel like to puke.

Take, for instance, The Daily Prep, a rather less than daily blog that details the adventures of Muffy Aldrich of Rhode Island, an apple-cheeked pale blonde who appears in her PR photo holding a fancy chicken and smiling radiantly. Muffy’s adventures revolve around LL Bean or other stores where a person might obtain a cotton sweater. Muffy writes with a painful, almost religious earnestness. Her prose suggests joy restrained and repressed almost to the point of dissolution; everything is supposedly about quiet pleasures—simple “farm chores” done for amusement, unpretentious boating, evenings with the family—but the accent falls on quiet rather than pleasure. Muffy’s cold little world makes my skin crawl.

Part of Muffy’s prep aesthetic rests on a particularly mannered and pretentious attempt to eliminate pretention—she likes only classic, timeless clothing, in pale colors, and she demands robust quality and utility. This consuming focus is part of what makes the blog so humorless since it so often verges into peachiness and condescension. Muffy’s selection of “useful” clothing brands the whole enterprise with a moral value. Her argument naturally casts all other clothing as useless and pretentious.

Wearing a cotton LL Bean sweater bought and salted away 10 years ago becomes an act of supreme, smug virtue; buying something frivolous (a brightly colored shirt, perhaps) disrupts this happy order. She reminds me of a recently converted Evangelical Christian. Her blog eliminates uncertainty and humor equally, though she claims in her review of the recent book True Prep that “the topic of Prep should be fun and light, eschewing a certain self-seriousness and snarkiness.” Nothing is more fun and light than eschewing things.

Note that I haven’t even mentioned the specifics of her aesthetic, the style that she promotes—I can’t imagine that anyone would particularly like it, since it rests primarily on a totally uninteresting, dull shapelessness. A typical outfit consists of a man’s plaid shirt worn with loose-fitting khakis. I’m falling asleep. The prep look may belong to the masters of the universe, but on Muffy it reads as shapeless, boring sexlessness.

Muffy’s connection to the prep world is clearly part of her selling point, though she doesn’t make it too specific (she mentions very frequently that her husband went to Brown). I really don’t care if she’s has an “authentic” claim on the preppy look (it’s so mainstream now that arguing about whether people who haven’t attended prep school have a “right” to prep is at best utterly asinine and at worst classist drivel). But this authenticity helps her make claims to the “right” and “real” way of doing things. It makes me very uncomfortable when people try to sell prep with an ethos and a lifestyle attached to it. Deck shoes may be suited to boats but I have worn them without injury or ridicule in Iowa City, a point just about as far from the Atlantic as it is from the Pacific. It’s just clothes.

I would not voluntarily spend 10 minutes with Muffy, but I would require a handsome payment to stick my hand into in the same building as Richard from WASP 101, a blog that makes Daily Prep look healthy and normal. Richard characterizes his look as “trad,” a term of recent coinage that describes a fussy and boring spin on the studied frumpiness of Ivy League. The “trad” uniform:

—Oxford-cloth button down collar shirt (usually invoked through the loathsome acronym OCBD; ironed but not crisp).
—Repp stripe tie (not necessarily one’s old school or club tie, but the average trad would be delighted if everyone he met thought so).
—Navy blazer with brass buttons (ideally from an old-name maker like Brooks Brothers or J. Press; must be “sack,” constructed without darts on the chest, lest it suggest muscular masculinity).
—Khaki chinos (occasionally wool trousers, or something in a more amusing color, but khakis are the trad vade mecum).
—Loafers (Internet trads seem to adore Alden loafers, often in thick, shiny cordovan leather, which comes from slaughtered horses).

Not the most interesting look, and certainly not a look that requires extensive exegesis and debate. Yet here’s Richard, with his blog, in which he slavers over Monica Lewinsky and reveals his embarrassing sexual fantasies in the form of supposedly true anecdotes. What this has to do with wearing un-darted sports coats escapes me. Judge for yourself whether his outfit photographs match his Master of the Universe blogging persona.

Less toxic is Unabashedly Prep, whose name suggests that most people would or should be abashed to dress prep; in a breathless fashion-magazine style it collects photographs of interestingly dressed young people, enlivening this activity with occasional image-heavy articles on more specific subjects. Prepidemic is less of a blog and more of a web-magazine with a heavy emphasis on sales; The Ivy League Look is perhaps the least objectionable of all these, since its focus rests squarely on history.

I can still understand why some people might pick up on prep for purely aesthetic reasons. When done without too much reverence and fussiness and without too much postmodern riffing the preppy look is indeed timeless, and it works equally well in casual and more formal situations (no one ever resents a blue blazer). And I remain entirely without sympathy to the idea that prep or Ivy League style requires an accompanying praxis; it’s just clothes.

The rich and powerful WASPs who originally wore this style would not be fooled by a tyro who learned his mode of dress from the Internet or from either one of Lisa Birnbach’s books. If you’re dressing preppy in order to convince people of your inherent worth then you need to focus less on clothing and more on psychotherapy. Adopting an exaggerated burlesque of the Northeast WASP lifestyle to go along with your LL Bean khakis is similarly crazy. Even the dyed-in-the-wool preppies who supposedly wear this clothing naturally can’t care all that much about it, they simply found khakis and button-downs in their closets when they were children and continued wearing them without modification as they grew older.

F. Scott Fitzgerald wrote in This Side of Paradise, “Amory's two years at St. Regis', though in turn painful and triumphant, had as little real significance in his own life as the American ‘prep’ school, crushed as it is under the heel of the universities, has to American life in general. We have no Eton to create the self-consciousness of a governing class; we have, instead, clean, flaccid and innocuous preparatory schools.” “Clean, flaccid and innocuous,” describes the preppy look quite nicely—it’s a soft look, not strong enough to bear all the pretentious insanity the Internet loads on it.