A new book explores the shocking history of American medical experimentation on children. 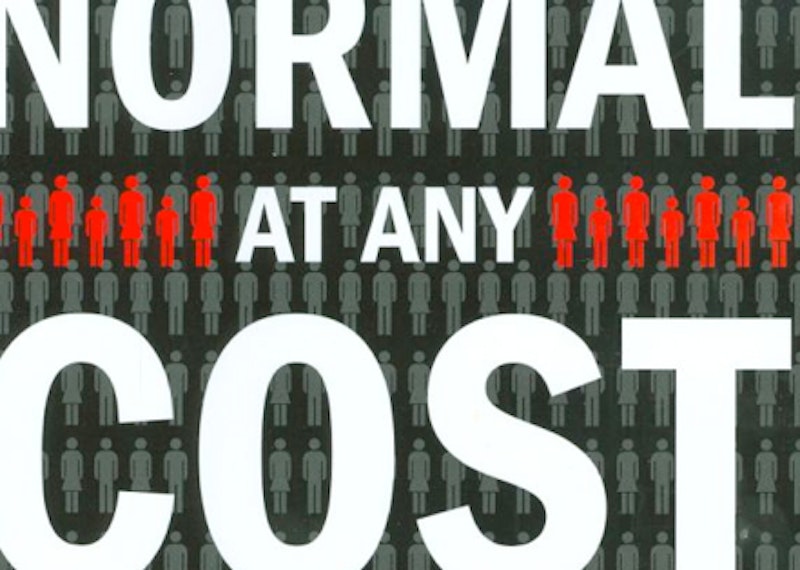 Even as an adult in her 50s, my friend Chris moves like a "tall girl." She shambles when she walks. Loose-limbed, she has a natural tendency to stoop in the presence of our shorter male bosses. "Clumping" is how she describes her gait. What's not so evident are the lifetime medical effects of the treatments that she was given as a pre-pubescent girl in the hopes of chemically arresting her growth and keeping her from achieving the stature that is her genetic inheritance—her father and brother are both well over six feet.

At 14, she was diagnosed by her pediatrician in San Bernardino, California as likely to grow "too tall"—for a woman, that is. "By that, he meant that I would grow too tall to be happy, too tall to fit in, too tall to find a man," she wrote in an April 5 op-ed in the Los Angeles Times.

The cure? Huge doses—100 times what's in a high-dose birth control pill—of Diethylstilbestrol (DES), the same drug that later was shown to cause cancer and reproductive abnormalities, most notably among the group now known as "DES daughters," whose mothers were given the drug while pregnant. (It's not clear how it manifests in sons.)

But Chris isn't comfortable making a lot of fuss about her experiences. She's more interested in drawing larger connections: to big Pharma, the medical profession and the ease with which parents' fears and ambitions for their children can be exploited by them both. That's the story told in Normal at Any Cost: Tall Girls, Short Boys, and the Medical Industry's Quest to Manipulate Height (Tarcher/Penguin $26.95) that she co-wrote with Susan Cohen, also a medical journalist. (Over some seven years in the researching and writing, the book was supported by a $50,000 grant from the Fund for Investigative Journalism.)

Normal at Any Cost is also a journey back to the not-so-distant past of the 1960s, 70s and 80s and provides some shocking reminders of the power that cultural norms can exert and how wrong they can seem a few decades later. Remember when women were banned from being stewardesses (and that was the term; no men need apply) if they were too fat, too tall or simply not pretty enough? Or when fashion magazines counseled women on how to disguise their height with dress and hairstyles and, above all, to never wear shoes with heels of any kind? That kind of thinking seems quaint and outdated in today's world of a towering First Lady and professional women basketball players who can outdunk many guys. But that was the kind of thinking that drove untold thousands (records not having been kept well or retained, there's no sure way of knowing how many) of girls to be dosed with hormones to induce puberty years early in the belief that that would stunt their growth and save them from a man-less fate (or worse!).

A child's adult height is nearly impossible to predict with scientific accuracy, it being the result of numerous factors beyond simple genetics (which is equally difficult to tease out, even with today's gene sequencing technology): stress, diet and exposure to environmental influences being just a few contributors. At the time Chris was getting her medicine, however, doctors were offering educated guesses and, since there was no "control," no way to know how tall the girls would have grown without the drugs, there was no way of telling if the practice worked—or if it didn't, perfect conditions for the "better safe than sorry" argument.

It was clear that the hormones had an effect. Chris recalls her experiences as a 14-year-old in the op-ed: "The side effects were immediate and unpleasant: nausea, vomiting, leaking breasts, depression, weight gain. My mother complained, the dosage was adjusted downward, my stomach calmed down, and I continued taking the drugs for five more years." She ended up nearly six feet tall.

Another story told in the book is how medicine can so easily be driven to create a disease out of a common trait and, more disturbing, how this can lead to mass experimentation on unwitting human subjects—in this case, children.

And height is the perfect condition to trigger a scenario such as that. Eighty percent of "short stature" children were "small for no known reason," Susan Cohen writes in her piece of the book, the short boy side of the experiment. And there is no definitive test to determine which children would grow if dosed with human growth hormone (HGH). Even when a child received a medical diagnosis of hypopituitarism—a condition that occurs in only roughly one percent of short stature kids—there was no predicting how he would respond to HGH.

"If diagnosis resembled an educated guessing game, treatment resembled a sophisticated balancing act," Cohen writes. Complicating the matter was the possibility that treating kids could stunt their natural growth by causing their bodies to create antibodies to their own HGH.

Underlying all this was the question of the long-term effects of massive hormone doses on children's still-developing bodies.

For Chris and her fellow tall girls, at least their treatment used DES, a relatively cheap, manufactured product. For short boys, the treatment required injections derived from HGH harvested from cadavers' pituitaries, at times under dubious arrangements redolent of 19th century body snatchers. The resulting substance proved to be extremely expensive and, it later was discovered, potentially lethal, after some patients developed Creutzfeldt-Jakob disease, a fatal wasting of the brain, which was passed on to them from donors who were CJD carriers. (Given the long incubation period for CJD, and the often-unregulated methods for collecting human pituitaries, it was impossible to screen for the infection effectively.)

As of November 2006, Cohen reports, 34 patients who were treated with human-derived HGH in the United States had died of CJD. The infection rate stands at either one or two percent, depending on the version of the hormone used. The threat from CJD is thought to have been eliminated for those treated after 1977, due to changes in how the pituitaries were processed, but the incubation period for CJD has not ended, and researchers expect more deaths to occur.

Even by the end of the 70s, when gender roles were starting to shift, and women were starting to be "liberated," height was still a major concern. When Randy Newman's "Short People" went to number two on the charts in 1977, he was vilified by advocates for short stature people who didn't see the satire in sentiments like short people "don't got no reason to live." If anything, it was a male thing. Survey after survey showed that even "normal" men wanted to be taller.

Around the same time, scientists finally cracked the genetic code and discovered how to synthesize HGH. With that discovery, the biotech industry was officially born, with the IPO by a new company called Genentech. It staked its profitability on its synthetically derived HGH. That only a couple of thousand patients who were officially diagnosed with the condition that HGH could treat was not a hurdle. The company's strategy was to use them as a "launching pad," Cohen writes. And it worked. Off-label use for those who were merely short would expand HGH to "'little Johnny who is in the lowest percentile and is unhappy,'" a Genentech vice president told a reporter in the fall of 1984. "Little Johnny," Cohen notes, "could be short because his parents and grandparents were short or he could even be temporarily short because he was maturing slowly."

People are still being dosed to control their height, though business among girls has all but disappeared as cultural norms have changed and as Title IX, the equal-sex sports funding legislation, has made height a bankable asset for girls and women in the U.S. (In Europe, girls are still getting treatments.) But the story of tall girls and short boys goes beyond the hormone pills and shots.

Parents are being offered new possibilities that include selecting certain attributes for their offspring through gene manipulation. As Chris likes to say, "Would you want your mother choosing your wardrobe? Why would you want her to choose your genes?"

There has been little attention to the adults who as children who were treated for shortness and tallness. The obvious tragedies—the kids killed by CJD—were slow to gain attention, because it took time for scientists to make the connections. Less obvious ones include reproductive problems among women, edocrinological irregularities among the men, cancer and—a huge unknown—the possible effects on their children and subsequent generations.

The government of Australia, where these treatments were pursued aggressively, has done some follow-ups. But for most patients, who were children at the time they were treated, the records and memories have disappeared with the deaths of their parents and the doctors who treated them. What we do know is that there is a population out there, some of us in our 40s, 50s and older, some even younger, who wonder whether we are carrying around a legacy of these experiments, unknown to researchers or even ourselves.

The morning after Chris and Susan were featured in a large spread in The San Francisco Chronicle, Chris received a phone call. There'd been a story next to theirs about a woman who taught pole-dancing as an exercise routine. She'd seen the story; she was the pole-dancer, she told Chris and she had a memory to share.

At seven, she was already tall for her age. Her mother, five-eight or so and fearful that her daughter would suffer if she were "too tall" like herself, took her to a doctor to see if something could be done to keep her from being a freak. Her father came along, too. The doctor told them about the DES treatments. The woman still remembers her parents' angry words as they argued while she sat in the back seat of the car on the way home. Her mother was in favor; her father, more than 6'6", was against. The end result? Her father won. Reading the story about the short boys and tall girls brought it all back.

There are more out there; that’s certain.