No Place For Home

This is what the housing crisis looks like through the eyes of a first-time homebuyer. 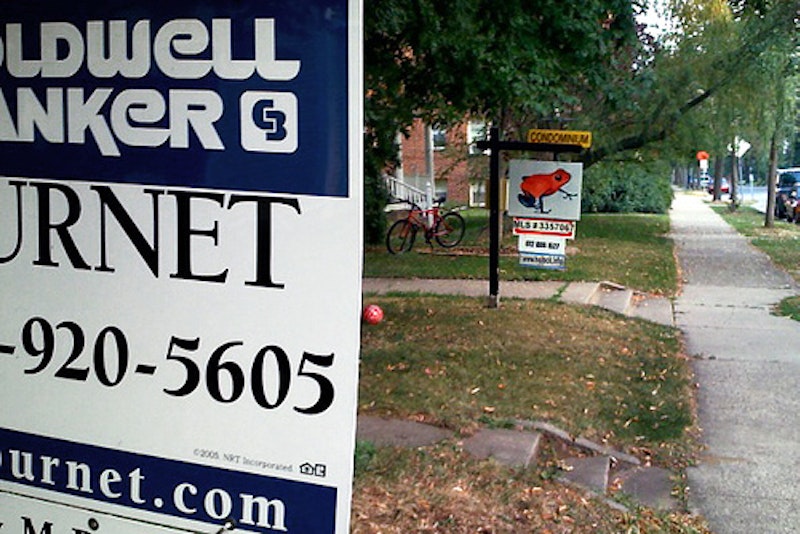 There’s a real estate site called RedFin that allows you to quickly and effectively search for all of the available homes in a particular neighborhood. According to the site’s listings, there are roughly 100 homes for sale in what is an approximately .15-square mile area northeast of my apartment—and that’s not even counting those that are currently under contract. I’m talking about an area that is only three blocks long and seven blocks wide, with over 100 homes just sitting on the market.


Only 274 Baltimore City homes were sold in the month of January. That’s a nearly 25 percent decrease from last year. Area news outlets are reporting staggering foreclosure numbers: “close to 800 in Baltimore County alone with nearly 700 more pursuing short sales to avoid what may be the inevitable.” Those numbers will likely go up, residential rehabilitation projects have stalled, and the area’s market is expected to continue depreciating through at least mid-2010. All of this despite the fact that, according The Baltimore Sun, area home prices have taken “the biggest year-to-year plunge in almost a decade[.]” In the last month alone, the average asking price per home in Baltimore City has decreased by 14 percent; but the number of homes sold continues to fall as well. Now is the time to buy, but not enough people are taking the bait.

My husband and I did, though, and are currently in the process of buying our first home. It started when a place across the street from our apartment—a beautiful, red brick rowhouse that we never would’ve dreamed of purchasing—slashed its asking price and fell into the top end of our range. Our neighborhood is littered with “For Sale” signs. Homes that would have sold for nearly half a million just a few years ago have been on the market for hundreds of days, some even more than a year, their prices dropping by another $20-$50,000 every few months. Smaller properties—starter homes that a young couple without children would naturally gravitate towards—have been falling as well. Suddenly, a neighborhood that we could just barely afford to rent in has become a place where we could realistically purchase a house.

While market depreciation has opened the door to a wider range of potential buyers, it has also greatly limited purchasing options. With house prices dropping further each month, the market should be a buyers’ free-for-all. Instead, the depreciation has led to a paradoxical situation from a buyer’s standpoint: as the number of available houses in your price range expands, the number that you could realistically purchase does not.

There are a few reasons for this problem, the first being actual sales. Homebuyers are waiting at the ready for prices to drop. If the asking price for a home has been cut once, you can pretty much bet it will be cut again. Buyers who are serious about taking advantage of the low market are going to know exactly what price range is most desirable for them and just how much they are willing to spend above that range. You look at houses that are just above what you’d like to pay, cross your fingers that the prices will fall once more, and when they do, you pounce. The beautiful place across the street from our apartment spent a total of two weeks at a price we could manage. The day we went to see it, there was already another offer. One day later, it went under contract and was gone. That house was on the market for 197 days before its third and final price cut.

There’s also the issue of short sales, which are, to put it simply, not short at all. A short sale occurs when a seller attempts to unload a house for less than he or she still owes on the mortgage. It’s a last ditch effort to make more money than you would in foreclosure. As such, all short sales must receive third-party approval, meaning that any agreement reached between the buyer and the seller is analyzed by the bank to determine if the deal is more beneficial than simply seizing the property. The process can take months and still not achieve bank approval. The longer a property sits on the market, the more desperate the seller becomes. The warning “potential short sale” is showing up in more and more listings as sellers drop their prices in an attempt to draw attention to their properties. But from a buyer’s perspective, entering into a short sale can feel like a risky prospect. You might get a good deal out of it. Or you might waste months that could have been spent looking for other houses only to learn that the bank didn’t approve the contract. You could always try to renegotiate the offer, but the price might go up beyond your range, possibly exceeding your loan qualification.

Which brings us to home loans, the real crux of the housing problem. At the peak of the housing bubble, with credit flowing free and easy, people were buying homes that they couldn’t realistically afford thanks to mortgage gimmicks and no down payments. Now that we’re in the middle of a credit crunch, these low cost mortgages have all but disappeared and conventional loans are difficult to obtain. It has become almost impossible to get a conventional mortgage without promising at least 10 percent of the sale price upfront, with many lenders requiring as much as 20 percent. The average sale price for a Baltimore City home in January, 2009 was roughly $150,000. A conventional mortgage down payment would mean  $30,000 in down payment. If you have $30,000, you can afford way more house than the one bedroom, one bath $150,000 can get you in Baltimore. Conventional mortgages are simply not available to most homebuyers right now. If you can’t guarantee that kind of money upfront, then your only likely option is an FHA loan.

FHA loans are great in that they only require a 3.5 percent down payment, but there are certain conditions that can become increasingly difficult to meet as more homes in your price range move into foreclosure. To qualify for an FHA loan, the house you wish to purchase must be up to a certain standard of livable condition. It has to have working, running water. There can’t be any defective paint surfaces—significant peeling or damage to paint would lead to disqualification. In a better market these smaller issues wouldn’t be such big problems; a buyer could negotiate to have the seller make any necessary repairs before the contract was settled. But with more homes being listed and sold “as is,” buyers have very little leverage in trying to bring properties up to code.

Most of the homes going into foreclosure have been empty and on the market for a long time. Many were neglected by owners and simply fall into an increasing state of disrepair and the banks will do nothing to prevent or fix the damage. I’ve even heard stories about owners taking out their mortgage frustrations on their homes. The properties go into foreclosure and instead of just leaving quietly, angry sellers rip down drywall, crack the pipes and take off with the kitchen sink. Someone with renovation expertise could buy up these properties for very little and turn them into beautiful homes, but you can’t purchase this kind of place with an FHA loan, and who wants to put a ton of money down, plus a bunch toward renovation to turn it around and still have the property sit on the market for nearly a year? It’s a pretty big risk to take at a time when it’s least likely to pay off.

The housing market is simply not the buyers’ playground that you might have imagined it to be. Prices are falling but sales aren’t going up because the same conditions that are undesirable for sellers—foreclosures, short sales, empty homes depreciating the overall value of otherwise nice neighborhoods, frightened lenders—aren’t appealing for buyers either. While it’s true that most homebuyers in this market will be able to afford more house than they could have a few years ago (or afford one at all, as is the case for my husband and me), it’s not exactly a buffet of terrific options. At least not for this young, first-time homebuyer.

There’s some real potential in President Obama’s new plan to shore up the housing market, and the $8000 homebuyer tax credit that just passed with the recent stimulus bill is definitely an added incentive to get out there and shop around. I’d like to tell sellers to be hopeful, that buyers are hungry and the market can’t get much worse than it is now. But the truth is, it can and probably will.