I Was a Teenage Food Wrapping Machine

Working at an outside concert venue isn't glamorous, but at least it's a job. 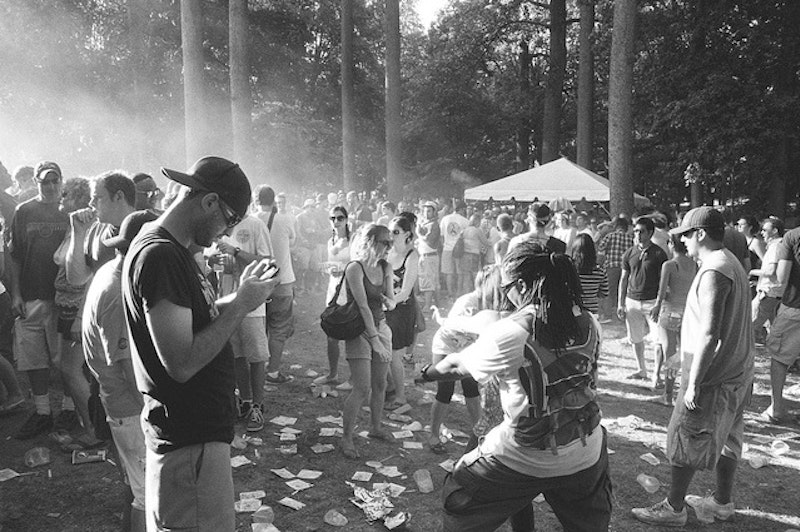 When a friend of mine told me, in the spring of 2009, that he’d soon start working at a local outdoor concert venue here on the East Coast, I was a bit miffed. What an awesome job—free food, easy work, and access to every show of the season. I imagined myself backstage chilling with Thom Yorke and Kanye West, passing around a fatty after a long day's work. The reality, when I joined my buddy this year, was a lot different: it was really boring. Grunt work is grunt work and minimum wage is minimum wage—but everyone has to start somewhere, and I was grateful for the job.

The company I worked for hired teens and young adults to sell food and drinks, clean stations, and gopher things to and fro. Perhaps the most enlightening part of the job was seeing what goes into making an outdoor pavilion run—who does what and how it all comes together. Immediately I was introduced to the employee hierarchy, which was a lot more nuanced and complex than I’d ever expected. Above the teen workers were the cooks and "chasers,” guys who drove golf carts around the grounds distributing ice, beverages and plastic bags. I was new to the game but soon picked up on a strange dynamic: the chasers were sought after by many of the female teenage employees, and stories of intra-golf cart fellatio spread. These were late-20s/early-30s guys, and surprisingly the higher-ups seemed to have no idea.

I felt like an outsider looking in. The relationships were already established, and the fact that I lived 45 minutes away distanced me even further from the culture. Even so, I was able to relish in the grand people-watching opportunities. Working at a soda cart, it was pretty much all you could do, besides counting bottles and playing with ice, things to stave off the boredom. Getting stuck in the kitchen was the worst. No crowd observation and annoying work. After wrapping hundreds of burgers and hot dogs over the course of a day, I would get home and see myself wrapping as I tried to go to sleep. The smell would linger on my clothes for a couple days; people thought I lived in a Royal Farm convenience store.

The crowds varied from show to show, but most everyone just wanted to get drunk and hang outside—usually, the music was secondary (understandably...most of the bands I saw/heard were awful). A few choice crowds stick in my mind. Early in the season, pop country act Sugarland performed to a revolting mass of humanity. I can deal with questionable fashion and hygiene choices, but was repulsed upon hearing lynching being discussed—deadpan—a handful of times. Later in the night, I came out of the bathroom and saw a young woman showing her boyfriend her pants, stained with feces. "I got poop on my pants!" she exclaimed. I shut down after that and don't really remember the rest of the night.

The crowd for Phish was exceptionally pleasant. The insane amount of drugs probably helped: I asked one scruffy looking fellow what drugs could be acquired, to which he responded, "Pretty much anything. Lots of bud, cid, shrooms, coke, Valium, Viagra, dirty ass heroin...crystal meth is especially popular." The last two blew my mind, but I can understand; it's hard to listen to Phish sober. Nice music to sell chicken strips to, though. Arcade Fire was another great show, with a more cosmopolitan crowd than normal. What really impressed me about that show was how empty the paths around the pavilion were—everyone was there to see the band, not to socialize and smoke pot in a big field.

I stopped working in September and don't think anyone noticed. I was one of the faceless scrubs, and have zero interest in becoming a regular. At the end of those 12-hour shifts, even the old dogs would start to lose it, screaming and reverting to infantile behavior. I will say, however, that I've rarely been happier than right after signing out after a full day: one's body is tense, wiry, and the hypnosis of wrapping remains. But that satisfaction almost made those long days worth it—almost.