I'm Sorry, We're Out of Pancakes

There's a brand new IHOP in the East Village, recalling memories of the Midwest. 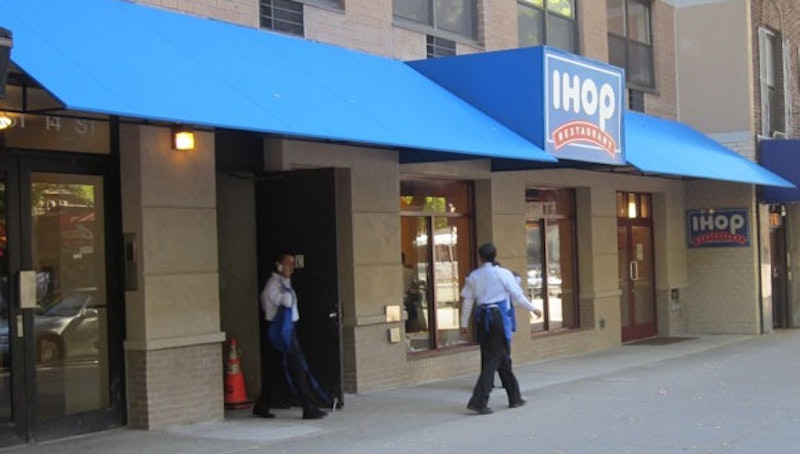 If you moved to New York City to escape some forlorn place such as Dubuque, Iowa or Sandusky, Ohio, and the one thing you miss about your hometown are the $3 buttermilk pancakes from the local IHOP, guess what? You’re in luck! A brand new red, white, and blue just fired up its griddle on 14th St. and 2nd Ave. So obviously this is kind of lame because, I mean, it’s IHOP. But it’s also sort of exciting because now, finally, you will be able to pig out on “All You Can Eat Pancake Combos” right after your bikram Yoga class! Right after you bought everything at Wet Seal!

I never walk along the stretch of 14th St. where the new IHOP is, and discovered it by accident, and I still don’t think many people know about it. I found out on one of those extremely convenient weekends when the MTA decided it would be wonderful to use one lane of track for both Brooklyn and Manhattan bound trains. If you can’t already tell, this is ridiculous, and it translates to a lot of waiting, a shit ton of cursing, and confusion rendered in many tongues. So, anyway, I’m forced to get out of the train at 1st Ave., made to get where I’m going by wandering around this newfound territory when: behold! An IHOP.

I won’t be saying anything about how the invasion of IHOP downtown means New York is losing its soul, because, I mean, there’s an HSBC bank in Williamsburg. Actually, this whole East Village IHOP thing is kind of hilarious. Though upon closer inspection I do have to point out that the new IHOP is kind of stupid looking. Like, it’s a hot mess. Those salmon colored seats? Who sits on salmon colored seats with brown, floral print? What is this, a high school cafeteria circa 1990? It’s just so generic, which unfortunately makes it an awful place to do brunch in this town. People in New York eat brunch to be seen, especially in cool places like the East Village. And I’m having a tough time imagining somebody really fabulous like Chloë Sevigny trading the frittatas at Pastis in for IHOP. But, then again, a brunch at the downtown IHOP could become the ironic, cool kid thing to do. It could go either way.

New Yorkers get real testy when suburban stuff like IHOP moves in on our defiantly anti-suburban protection zone. But somehow I don’t feel threatened by a buttermilk pancake, especially since it’s kind of difficult to find cheap, reliably good ones in New York. Some diner pancakes are way too greasy, way too burnt, or way too big. And, for the record, I’m not so into this whole fancy “ricotta” pancake thing. A pancake is not supposed to have cheese on the inside. I don’t care how organic or artisanal it is.

More than the food, I attach so many memories to IHOP. Doesn’t everybody have an IHOP story? When I spent a couple months in Chicago a few summers back, my friends and I would go gay dancing in Boystown, and we would always cap the night off at three a.m. or four a.m. with a trip to the IHOP at the top of Halstead St., GayHOP as it’s known locally. It was just too funny rolling up in there—imagine all those gay dudes and drag queens, fresh from the club. Then there were other people who were still on hoe stroll, trying to snag a piece before the night was over—and I ain’t talking ‘bout sausage. Now every time I go back to Chicago I insist on going to the GayHOP, and I order the same thing every time: a short stack with a side of ham and a cranberry juice.

I’ll drag my New York friends to the East Village IHOP soon enough—you know, for shits, giggles, and Hepatitis B. But the one thing that would make our visit authentically New York is if I ordered my usual and the host said, “I’m sorry, we’re out of pancakes.” What do you mean you’re out of pancakes? This is the goddamn International House of Pancakes!