Finally, You Can Airbrush At Home

Introducing Temptu, for that photoshopped-into-oblivion look. 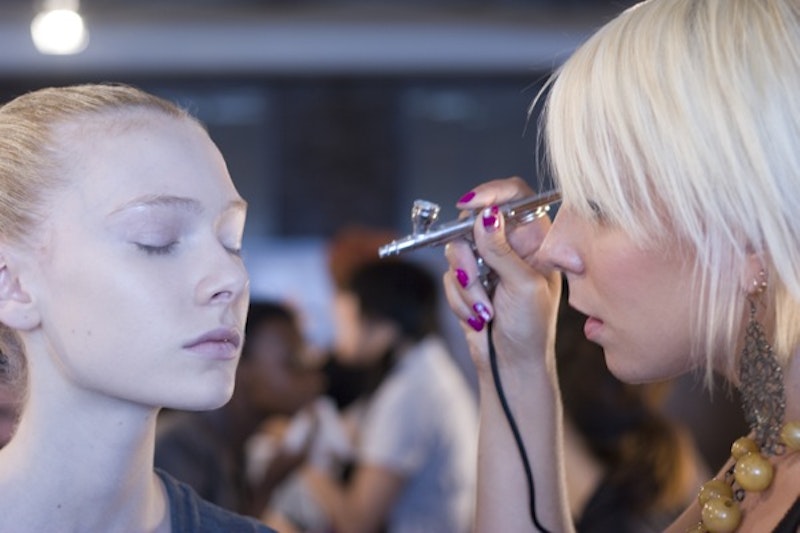 I really thought that prescription-only permanent mascara and "vaginal rejuvenation surgery" were the end of the line when it came to turning a profit from women's low self-esteem. But, as is often the case when one utters the phrase, "well, now I've seen everything," I was wrong.

Introducing Temptu, a new makeup line whose marketing heralds its revolutionary new "airbrush system," designed to simulate on a woman's skin the effects of computer-generated airbrushing. Temptu is real-life airbrushing that you can perform at home. Let's just stop and take a step back—and when I walked past the window of Sephora recently I had to literally stop, and take a step back—to think about just how incredibly screwed up this concept is.

For years now, the images we see in magazines and advertisements have been edited using airbrushing, which can make surfaces appear smoother or more uniform. At this point, almost every image of a woman that we see in the print medium, with the exception of news photos, has been airbrushed. For a long time now, airbrushing and other forms of photoshopping (such as slicing away large parts of your cover girl or stretching your model's limbs until she looks laughably out of proportion) have been an expected part of the photography process. When singer Kelly Clarkson appeared on the cover of Self magazine earlier this year, her face and body noticeably slimmer than in real life, Self Editor-in-Chief Lucy Danziger defended the magazine's choice to digitally alter Clarkson's photo, calling airbrushing "an industry standard."

Some people object to the practice of airbrushing and photoshopping, and long for the day when advertising and magazines will feature images of women who resemble actual human females. Many of the women we see in print commercials and fashion spreads no longer reflect the reality of human existence: as sociologist Jeanne Kilbourne pointed out in her seminal documentary Killing Us Softly, an analysis of how women are depicted in advertising, some of the female faces that are being used to sell cosmetics have even been digitally stripped of their pores. Erasing these physiologically rather crucial body parts, as well as freckles, lines and other "imperfections" sends a strong message to women that perfectly normal body parts are flaws, that require, as Danziger put it, "post-production corrections."

Not surprisingly, commentators believe that constant exposure to images of women that look nothing like us or other women can have a negative effect on our body image. This was Kilbourne's argument in Killing Us Softly, and now, legislators in Britain and in France have taken up the cause, too. In August, politicians in the UK began calling for a photoshop ban in advertisements aimed at consumers under the age of 16. Jo Swinson, a Member of Parliament and a proponent of the ban, said, "the focus on women's appearance has got out of hand—no one really has perfect skin, perfect hair and a perfect figure, but women and young girls increasingly feel that nothing less than thin and perfect will do." And just this week, French politicians called for a law that would require photoshopped images to be accompanied by a health warning that would read: "Photograph retouched to modify the physical appearance of a person."

There is certainly something sick about digitally retouching a model's face until she no longer appears to have the physical capacity to sweat. But there's something even sicker about a makeup product that promises to reproduce that unnatural poreless look on the faces of real women.

The Temptu system, a machine that sprays makeup onto your face, much like the makeup gun Homer Simpson created during his "inventor" phase, has come on the market at an interesting time. Women have never been more media-literate; for the most part, we know how to recognize a photoshopping when we see it. But the success of Temptu indicates that, even as women recognize photoshopping and airbrushing, they still find the photoshopped look desirable, despite their knowledge that it's unrealistic and perhaps even a little creepy.

Promising the kind of "perfection" once only possible through post-production digital enhancement, Temptu represents a rather depressing internalization of, and aspiration to, the plastic and poreless airbrushed look. It appears that even though women recognize digital enhancement as fake and fraudulent, they nonetheless aspire to look as though they themselves have been digitally enhanced. Apparently, if you're told often enough that something is beautiful, eventually you'll believe it—even if that something doesn't look altogether natural, or even human.