Genderless society is an utter myth. Someone tell the advertising companies. 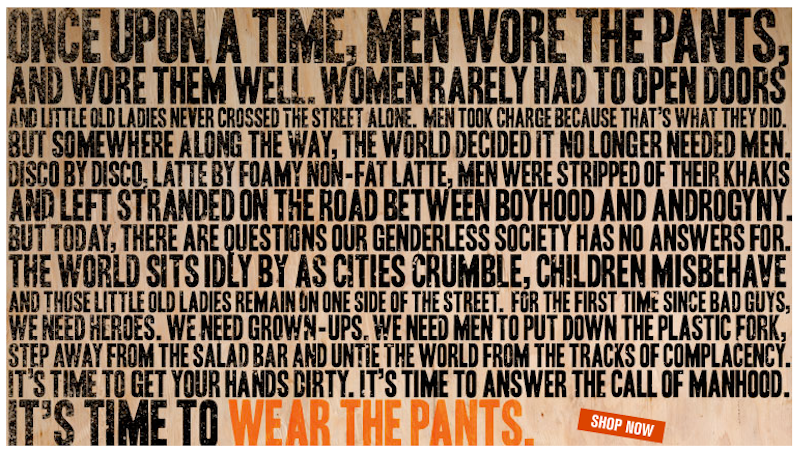 Real men wear khakis. Fake men eat salad and drink lattes and let women open doors for themselves. They do girly things like go to discos, and that’s why the world is falling apart. At least, that’s what the new Dockers khakis ad campaign, which is currently plastered all over New York’s Penn Station, would have us believe. The Dockers “Man-ifesto” campaign calls upon men to “get their hands dirty” and “answer the call of manhood,” warning that if they don’t, our society will continue to crumble, children will become juvenile delinquents, and grannies left unassisted waiting to cross the road.

The main claim of the Dockers campaign seems to be that because men were stripped of their precious khaki pants (I must have missed the international decree banning them), our world has descended into “genderless” chaos. Well, rest easy, Dockers: your fears are utterly misplaced. We are not living in a genderless society, something made painfully clear by the very existence of the Dockers Man-ifesto. If fact, only in a highly gendered world could a commercial like this one ever be conceived of, approved and posted over at Penn Station.

The message is that masculinity is under attack, apparently from women who insist on opening doors for themselves and who support taking away a man’s right to choose chinos. The campaign is hardly subtle about blaming feminism for the genderless, khaki-less mess that is modern gender relations. The trouble all started, it claims, in the age of disco—the 1970s—which was not coincidentally also the peak of the Women’s Movement.

But, of course, the problem isn’t just that women decided they wanted to be more like men. It’s that they wanted men to be more like women. “The world decided it no longer needed men,” and now we live in a world where men and women alike do girly things like drinking non-fat foamy lattes and wearing pants made of something other than pleated tan cotton. And today, because men are no longer manly, the world is going to hell.

The Droid commercial doesn’t adopt the Dockers argument that the feminization of our culture is melting the polar ice caps and destroying the Dow, but its blatant use of “feminine” as an insult should calm the nerves of those Dockers executives who are convinced that our society is going to the dogs.

The voiceover of the Droid commercial asks:

Should a phone be pretty? Should it be a tiara-wearing, digitally clueless beauty pageant queen? Or should it be fast? Racehorse duct-taped to a scud fast? We say the latter. So we built the phone that does—does rip through the web like a circular saw on a ripe banana. Is it a precious porcelain figurine of a phone? In truth? No. It's not a princess; it's a robot. A phone that trades "hairdo" for "can do."

This commercial is certain proof that despite the upheavals that our culture has seen around gender since the dreaded disco era, our society clearly remains split along gender lines. As these ads make clear, you’re either a clueless, tiara-wearing, salad-eating woman or a khaki-wearing, damsel-rescuing real man. These are your two choices, and proof that fears of a genderless society are completely unwarranted. Gender is everywhere, and it’s an enormously popular marketing tool.

Genderlessness is not what’s ailing this country. When it comes to the state of gender in modern American culture, there are problems that genuinely deserve our attention. The fact that an inanimate object like a cell phone can be branded and marketed as “manly” and therefore “good” is one cause for concern. The fact that advertisers will happily harness men’s fears about the blurring of gender lines, the decline of male authority and the success of feminism in hopes of selling khakis is another. There’s the gender pay gap and the lack of women’s representation in politics and business. And there’s the fact that last month, 64 Democratic Representatives voted for a healthcare bill that would make it almost impossible for women to access one of this country’s most commonly performed medical procedures, abortion.

These are the genuine gender problems we face. And it’s going to take a lot more than khakis to solve them.