Doc, Am I Going Bald?

It's hard to trust doctors when you could be worth so much money to them. 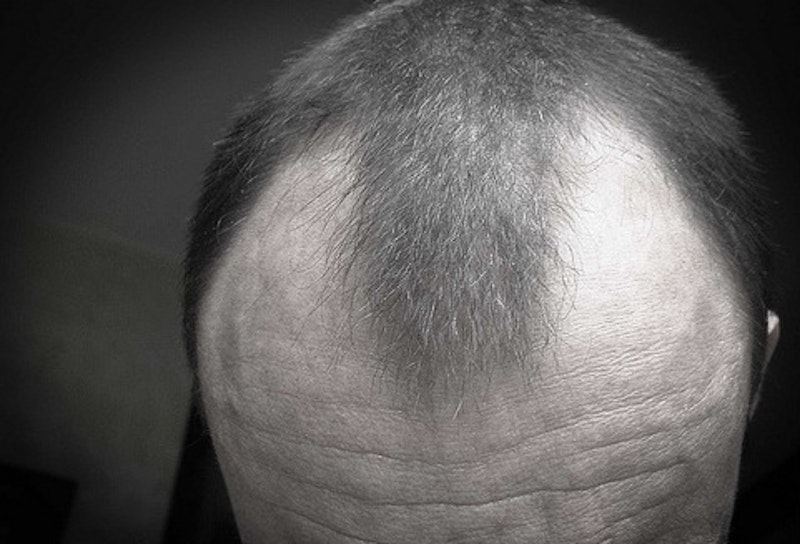 So I guess I’m going bald. I knew my hairline was sneaking upward a touch, though if you saw me you probably wouldn’t realize there was any male pattern baldness happening there. But a few days ago in the shower, after washing my hair, I noticed follicles all over my hands. This wasn’t the first time, though I’ve always fretted a little, only to be calmed by friends with the standard “You lose millions of hairs a day, it happens to everyone.”

But this was a little too much hair to ignore. Perhaps I’m a smidge more neurotic than the average soul, but everyone has that one thing they fear about getting older. I imagine others worrying extensively about arthritis or back hair or old person flab or gray hairs or wrinkles or any number of things that happen as you age. My well of anxiety, though, has always been deepest when it came to baldness, even as a child.

Maybe it’s because I’ve always dreamed about having Richard Gere-style gray hair someday, boldly embracing an aspect of aging that I know many people fear. Without hair, though, my aspirations to be a silver fox, exuding suave power and sophistication, are merely wispy dreams. What other dreams will I have to give up? Can I be successful without hair? Do I have to start pretending to like Vin Diesel?

My reaction to this unsettling prospect has vacillated between fatalistic anxiety and naïve hope. Sometimes I am shocked to still see any hair when I look in the mirror. Other times, feeling a bit delusional and spry, I tell myself that everyone’s hairline recedes a little, and it will stop in a little bit. Alas, losing one’s hair is a delightful metaphor for aging: there’s nothing you can do it about it, it was and is inevitable, it happens earlier and much quicker than you’d ever expect, and once it starts it won’t stop until everything is gone.

But that’s not what the makers of Propecia and Rogaine would like you to believe. While the hair you’ve lost is most likely gone forever, these products advertise—with some evidence to back it up, I guess—the ability to maintain the hair you already have. Indeed, they have actually been FDA-approved and advertise these fancy studies.

Herein lies a problem. While I’m not sure I doubt the validity of the treatments—I have heard success stories from people I know—I also don’t really trust any (and I mean ANY) of the information I have right now. It’s not a good sign when Wikipedia seems to be the sturdiest source of information you can get your hands on about a topic. It’s true that balding is a particularly troublesome phenomenon that we haven’t been able to pin down and predict. The article on About.com drops this delightful gem: “If you are a man between the ages of about 20 to 45 and you start to lose scalp hair, then the chances are 95 per cent certain that you are experiencing male pattern baldness.” I have no idea what this means. It could mean that I am guaranteed to lose all the hair from the top of my head within a year. Or it could mean that I may go bald when I’m 80. It reads like all of my hair will be gone in a matter of months, but I sincerely believe—and hope—that is not the case, though, admittedly, that interpretation could just be my neurosis about the whole thing.

Here’s where the situation gets tricky. The lack of clarity surrounding the nature of male pattern baldness, combined with the amount of money potentially made by pharmaceutical companies and doctors off of my hypothetical baldness, have left me unable to trust anyone. If I go to a doctor and tell him or her I’ve been losing my hair and don’t want to lose anymore, I will most likely get the same answer as my friends and told to start taking Propecia immediately. I understand why that would be the answer, as the “better safe than sorry” scenario definitely applies here. Indeed, if I had excess money to throw around (a yearly prescription is about $600 if you get it from mildly sketchy online Canadian sources then I would probably hedge my bets and begin taking a pill that I will literally have to take everyday ever for the rest of my life or else my hair will start falling out.

My inability to afford a potential treatment has left me not only unwilling to consult a doctor about a medical concern but unwilling/unable to believe a doctor if I actually did see one. It isn’t at all that I think a doctor would lie to me, I just think with the inherent uncertainty—how quickly will you lose your hair, how much will you lose, is your hair loss normal or preventable—a doctor would rather tell me to seek expensive treatment than simply say, “I don’t know.” The presence of a massive, infinite prescription paradigm distorts the patient-doctor relationship in a way that benefits neither. Not only does the pharmaceutical company make money off me until I die/lose all my hair, my doctor/dermatologist gets extra visits out of me, which doesn’t hurt his bankroll, but erodes my trust in him.

This is different than most cases. If, God forbid, I found myself with erectile dysfunction there wouldn’t really be much room for the paycheck at stake to interfere. Having erectile dysfunction is one of those things where you either have it or you don’t and you know either way. Likewise, even something like ADD/ADHD, which is now treated with multiple drugs like Adderall or Ritalin, leaves room for “as-needed.” You know if it’s working, or even if it just feels like it’s working, and you can deal with usage as you please.

Despite my fatalistic skepticism, there is actually a chance that my recent hair loss does not mean my hair will be gone in five, 10, or 40 years. It’s still scary because every day that passes could be my last chance to save a few hairs on the top of my head, or it could just be my hairline shortening a bit like is normal in most men.

What’s troubling is that this is the first time I’ve really been exposed to the possibility of taking a drug that doesn’t cure you but is required every day to stave off a disorder. I know doctors are supposed to be above reproach when it comes to money, but from talking to doctors and people in the field, I hear how much concerns about money enter their thoughts, especially in public hospitals or clinics. They have to because there is so much drain on medical finances that someone like me going to a university hospital’s dermatologist once every few months helps offset the Medicare-insured lady who has been to the E.R. four times in the last two months. But it’s not really anyone’s fault. I’m not thrilled by the ties between name-brand pharmaceuticals and doctors, but I don’t know if that’s to blame, either.

I just wish there was a way for me to get over my mistrust in doctors on this issue. But, you know, that’s even more naïve than hoping that I’m not actually going bald.