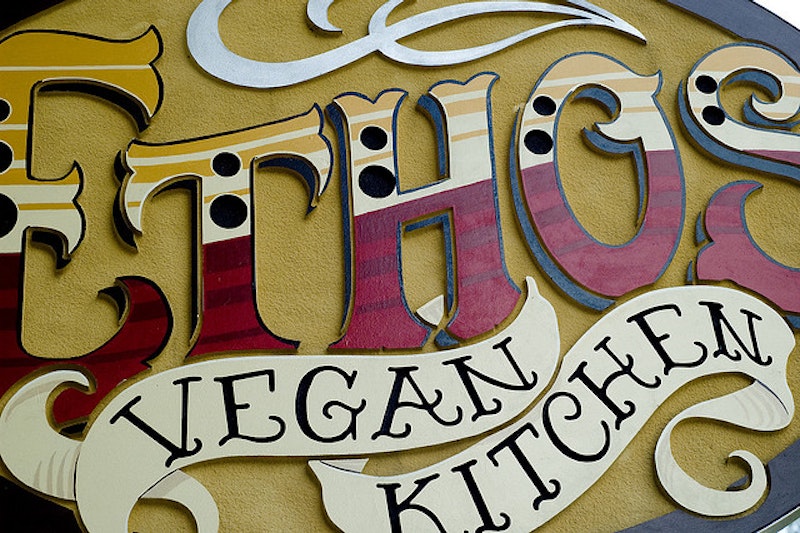 When my daughter was seven, she announced she was going to be a vegetarian.

What I thought: “This won’t last 24 goddamn hours.”

At age 13, she announced once again that she was going to be a vegetarian. (No fucking way, I thought, Miss Pork Product Lover! Good luck.) It stuck this time. I learned all about tofu and hummus and Boca, and supported her decision, asking only that she add her requested items to the family grocery list, as well as fix her own dinner so I didn’t have to prepare two. Our family ate healthier because she was eating healthier, and overall it was a positive transition considering we are a family who loves ourselves some cheeseburgers on the grill and bacon with our eggs.

About two years later, she made another announcement.

She was now a vegan.

What the fuck is a vegan? I thought.

She “vegucated” me that it meant no animal products of any kind whatsoever. No dairy—the milk, cheese and eggs she had been eating for protein were now off-limits. She explained that veganism is really what vegetarianism used to be, but they sort of became slackers by beginning to include dairy and other animal products back into their diets. I tried to take the news with a grain of sea salt, and basically restated the rules “put what you want on the list” and “make your own goddamned dinner.”

She refused to wear the Uggs slippers she’d desperately wanted earlier and got for Christmas but now knew were made from animals. (I wear them, they’re super comfy and God knows I would no more spend over $100 on slippers for myself than fly to the moon, so bonus! And I can’t even hear the lambs screaming.)

I am pretty sure I will never, as Jimmy Buffett said, amend my carnivorous habits, but after watching movies like Food, Inc and reading books like The Omnivore’s Dilemma due to my daughter’s personal beliefs, I have learned a ton (like, for example, the food we eat is disgusting) and I now only buy meat for our family from a local organic farmer.

Honestly? The one thing that annoys me is the honey. Yeah, bee honey is an animal product, but it is also an ingredient in many things she would otherwise eat, like granola. I try to keep comments like “What?! Do they ass rape the bees to get the honey out?” to a minimum.

Needless to say, there’s an app for that, and she uses it to determine, if we’re traveling, which nearby eateries serve vegan food (did you know Burger King French fries are vegan but McDonalds aren’t?). Some changes are easy—I’ve learned which varieties of oatmeal she can eat, which kind of Ramen Noodles are vegan (only one, Oriental, but she only uses half the seasoning packet) and which brand of soymilk she likes best. I know Oreos are vegan (hollah!), to buy only the original veggie Boca burgers, and which brand of breading (Corn Flakes crumbs) I can buy to make her fried green tomatoes. Easy enough to make mashed potatoes with her vegan butter and soymilk.

For her, being vegan is definitely not a peer pressure thing—she doesn’t even know another vegan teen at her rural school where the kids mostly wear camo and brag about how many points there were on the buck they shot this weekend. (Redneck hell for a vegan).

Seeing Lady Gaga’s recent roadkill rags (if you haven’t seen it—she is wearing a dress and hat made completely from raw meat for the new cover of taking-sushi-too-far Japanese Vogue) is pretty much of a freak show not only for my daughter and me but for human beings in general.

I admire my daughter for her intelligent dietary choices, which seem to surpass those of a certain pop superstar. The response of PETA to the Gaga moo-ha-ha was, frankly, completely lazy. PETA President Ingrid Newkirk said, “Meat is something you want to avoid putting on or in your body.”

As for me? I remain a carnivwhore. Totally pass the bacon, dude.

But at least I’m not wearing it.