Beer Is Supposed to Bring Us Together

Sam Adams is fine. So is whatever else you want to drink. 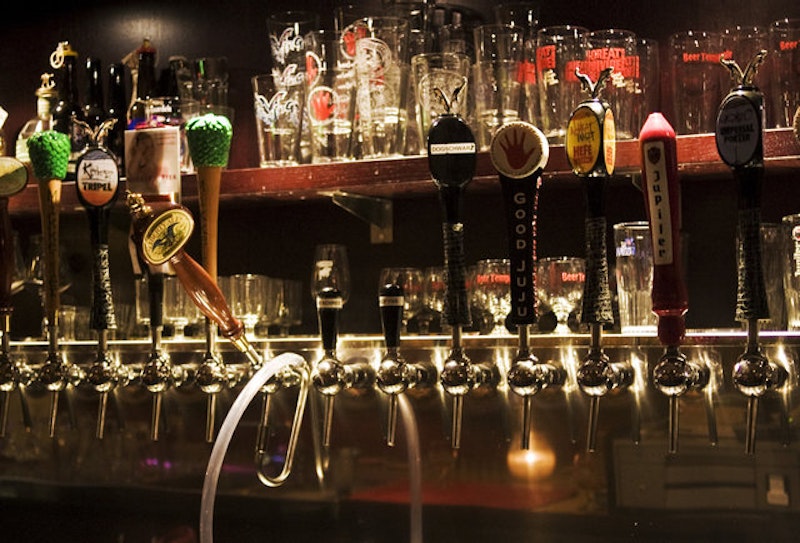 Among the things my parents bought me for Christmas this year was The Ultimate Book of Beers, a guide to more than "400 ales, lagers, stouts & craft beers from around the world." Back in the Borders/Barnes & Noble days, I'm sure this weighty boxed hardcover would have been prominently displayed up front, retailing for $40. Right now, Amazon has it for $5.99, which is probably still too much. It's full of professional photos and 200-word blurbs and comes with a Tasting Notes book so you can rate all your favorite beers, one of those things I hope to God no one would ever actually do. Yes, I drink a lot of beer. No, I'm not one of "those guys."

There are now more than 3,000 breweries in the U.S., more than 99% of them small, craft breweries, and arguably Jim Koch, founder of the Boston Beer Company, is responsible for this. No one disputes it anyway. Koch sold his Sam Adams Boston Lager bar-to-bar back in the early 80s, when the beer market was dominated by big-name corporations—Miller, Coors, Pabst, etc. Through shrewd marketing, Koch turned the Boston Beer Company into the fifth biggest brewery in the U.S., valued at more than $3 billion. Along the way, Koch has supported upstart breweries with his Hops Share program, his Brewing the American Dream initiative and his annual LongShot American Homebrew Competition.

But in a recent article for Boston magazine, Andy Crouch argues that, amidst a market dominated by West Coast IPAs (Sierra Nevada and Lagunitas are well-known examples), the Boston Beer Company is struggling to stay relevant. “The simple truth,” Crouch writes, “is that more and more beer drinkers don’t want Sam Adams, and in turn, an increasing number of bars won’t sell the famous amber lager.”

This isn’t surprising. With more competition, the Boston Beer Company is bound to command less market share. It’s not that Sam Adams isn’t good (though Crouch found a few Boston-area bar owners who said just that), it’s that every bar has twenty different taps and thirty different bottles and cans, and sometimes you just need to know what a grapefruit Lambic tastes like. This isn’t a bad thing.

I was never much of a Sam Adams drinker, my friends and I always preferred Yuengling. When I think of Sam Adams now I mostly remember that fake Family Guy ad, though I wouldn’t turn one down if someone bought it for me. And while Crouch’s article is a mostly fair and balanced look at the recent craft beer revolution—and Koch’s modest attempts to keep up—leave it to Internet commenters to drag the whole thing into a petty My Beer Is Better Than Your Beer shitfest. On the r/beer subreddit, the article has gotten more than 800 comments, many of them debating the relative merits of Sam Adams and the Boston Beer Company’s various seasonal releases. A response post on the Anti-Hero Brewing blog pinned the blame on, of course, hipsters: “…what it really comes down to is that [bars] can swindle Johnny Ironic-Mustache out of an extra $3 for a truly inferior product.”

Maybe, maybe not. But inferior to what? Is Sam Adams the standard for quality beer now? I’m not much of a free-market capitalist, but an upstart company doesn’t last by selling an “inferior product.” Hype only gets you so far. Crouch quotes Boston brewpub manager Jamie Walsh as saying, “Right now, it’s about what is shiny and new… [there’s an] annoying hipster attitude toward beer… People want to try new stuff all the time.” And so what? If that’s true it’s probably because there’s new stuff to try all the time. That’s what happens when you have 3,000 breweries in the U.S. and not 80 like there was in 1983, when Koch got his start. Maybe “Johnny Ironic-Mustache” buys the beer that’s an extra $3 because he’s never had it before, but if it really is an inferior product, I really doubt he buys it again—and he probably tells his friends it’s total shit so they shouldn’t waste their money. Beer is subjective preference: I like IPAs and pilsners, I avoid dark stouts and fruity beers (the Boston Beer Company, by the way, dominates the hard cider market with Angry Orchard, so I wouldn’t worry too much about their finances). Beer is supposed to bring us together: if a few bloggers and Internet trolls want to squabble, that’s fine, the rest of us will be at the bar.