For when you just want to smell different, not necessarily good. 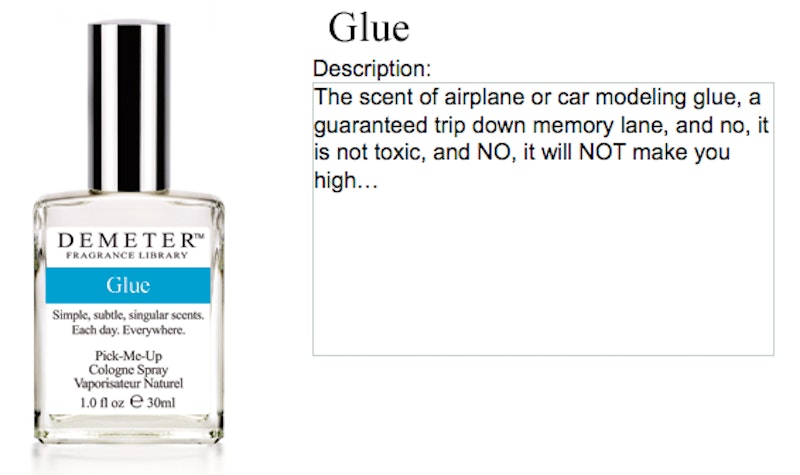 One of many offerings from the Demeter Fragrance Library.

Christopher Brosius approaches perfume the way the Dadaists approached art: as a medium co-opted and abused by evil forces and sorely in need of an enema. He has a delightfully serious manifesto, available on his website, that criticizes commercial perfume (he calls it, among other things, “a childish masque hiding the timid and unimaginative,” and “an arrogant slap in the face from across the room”) and the consumers who buy it. “People who smell like everyone else disgust me,” he writes. Brosius is at his best when he is scrawling obscenities across the Mona Lisa of CKOne and Hugo Boss; he becomes silly and indulgent when he talks about the transformative power of perfume: “Perfume is an art that shows us who we can be if we dare—an invisible portrait of who we are,” he continues, promising us that if we buy his perfumes we will not be disgusting, nor will we slap our friends and family in the face with crass and commercial aromas. Talk about the work of art in the age of mechanical reproduction.

Brosius sells expensive perfume that eschews the generic nice smells of more ubiquitous brands in favor of more referential scents (tea, plants, paper, leather). But he still sells perfume, and his claim that his scents will make you more of an individual than Polo is as ridiculous as any ancient advertising pitch. All that aside, not that many people know about or wear Brosius perfumes, so if you are in the market for a fragrance that actually will stand out you might pay a visit to his delightfully-designed website. The site evokes one of those practically empty boutique clothing stores in lower Manhattan (maybe Helmut Lang) It projects the same sense of hush, the same hipness, and it relies on simple fonts and bold photography to communicate exclusivity and luxury. Brosius’ project has a literary dimension. Some of his perfumes come with a short, elegiac description of a moment in Brosius’ life, some with a precise, clinical description of their scent components, and all of them bear suggestive names: In the Library, I am a Dandelion, Memory of Kindness, Winter 1972.

The colognes are, as you might expect, expensive, although he does offer a sample/travel size for less than $20, which is so hilariously small they probably would last for a month of daily use. And despite his radical ideas about scents the ones that I have tried have been on the whole pleasant, and not radically unlike the ubiquitous designer colognes. Perhaps it’s fortunate that Brosius’ revolutionary plans for fragrances fell short of their weird goals. For instance, he describes his Greenbriar 1968 as “blended with Sawdust, Fresh Cut Hay, Worn Leather Work Gloves, Pipe Tobacco and a healthy amount of Dirt. There is also a faint whiff of cotton overalls covered in Axel Grease...”

I was intrigued. I bought a sample and found not a hint of tobacco, sweat, tractors or grease. What I did find was a dense, sweet, pleasantly green scent that was hard to peg to any particular source. It was, in a word, a cologne (though all of Brosius’ scents are ostensibly unisex), not a collection of bizarre scents, but it was quite nice and one which a person might wear in public without fear of smelling like he had just stepped out of The Cider House Rules. Brosius’ Mr. Hulot’s Holiday (named after the Jacques Tati film) similarly failed to deliver its inspirational scents (driftwood, seaweed and old suitcases) but has the advantage of smelling wonderful, intensely fresh with a tiny hint of saltwater, laden with what perfume aficionados call ozonic notes. The Brosius Mr. Hulot also lasts longer than any other cologne I’ve encountered. I wore it to a night of drinking cheap whiskey with some friends in New York, slept in my clothes on a futon, took the train back to Princeton and by noon of the next day I still smelled like French social satire.

Brosius’ In the Library comes closer to his perfume manifesto—this is a dark, faintly sweet smell that suggests mildew, polished wood and old books without reproducing them. This is the most interesting of the three CB perfumes I tried and perhaps the least wearable, but it does show that Brosius can create scents that smell good, but also like something foul and unpleasant. Describing scents is never easy, and In the Library presents a special challenge with its unearthly combination of stench and fragrance.

For those intrigued by the idea of representational cologne who are turned off by Brosius’ incredible level of pretension, Demeter Fragrance Library produces a huge, straightforward catalogue of scents that smell like their names. They offer, for example, bamboo, glue, ivy, and suntan lotion. Demeter lacks a single frontman and avoids Brosius’ impassioned art talk, and their fragrances are cheaper and come in more generous portions. From my experience their one-note fragrances strike eerily close to their namesakes; I tried their Sawdust and found it quite alarming to be able to spray, at will, the scent of a wood shop.

Demeter also produces some more evocative fragrances, like Wet Garden (water, leaves, dirt, flowers) or Thunderstorm (wet pavement). These both have a sharpness that Brosius’ cologne lacks, though they evoke their inspirations more effectively and clearly than Brosius’ fragrances do.

Ultimately all of these avant-garde fragrances ask questions about the purpose of colognes and perfumes. We’ve come a long way from sweaty Hungarian cavalrymen trying to mask their musk, and most of us wash our clothes rather frequently, so cologne no longer serves to cover naturally foul odors. Scent is, of course, a way to communicate. Luxury colognes usually smell pleasing and may, if their person who detects them is knowledgeable, imply good taste and wealth. In their movement from the abstract to the concrete these more daring fragrances opt for a more direct communication, of specific objects or specific places. They are novel, diverting and entertaining, but it’s not really clear if this is what we want our fragrances to do; in many cases one might prefer to smell generic and pleasant instead of like a campfire or a country kitchen or a working sawmill.