A Girl and Her Truck

It reeks of redneck, but I drank the Kool-Aid. 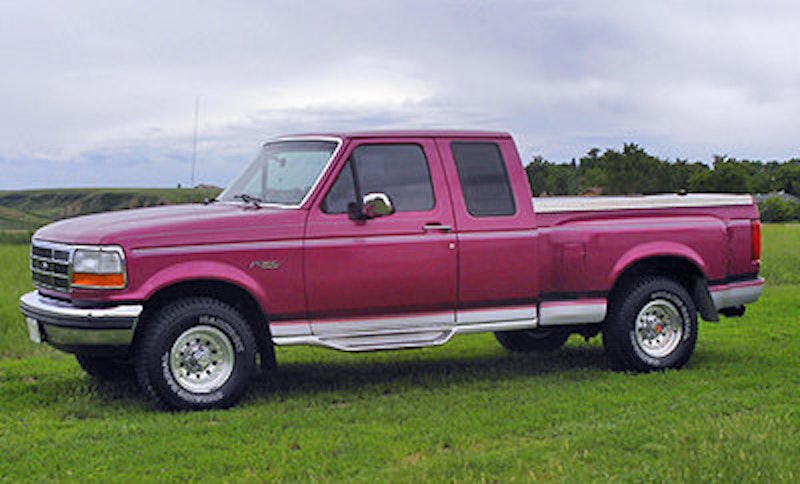 If you travel the roads on the Eastern Shore of Maryland, you’ll find that most common vehicle is a pickup truck. Most buy them due to work-related need, but in reality owning one is an integral part of rural mentality. If you’ve never owned one, you probably can’t comprehend the coolness factor.

I’ve owned my share of cool cars. A Mercedes. A Lexus. But I’d choose my old Ford F150 over any of those. I drove it for years, and those were some of the happiest days of my life behind the wheel. It was nothing fancy: blue and white body, toolbox in the bed, a few dings here and there. I tied a pink satin ribbon onto the rear view mirror, a nod to my feminine side.

I was my authentic self in that truck. Once, I attended some top-shelf event in town and pulled up dressed to the nines in my stiletto heels, stepping out of the old Ford. The valet, I’m sure, didn’t grasp the contradiction. Some days, I’d roll down the windows, throw the dog in the back and swirl down the road with a sense of sexy freedom. I discovered that a girl in a pickup is definitely a guy magnet.

A new survey from Insure.com asked women to rank the kind of vehicles driven by the most attractive men. No surprise here: a black Ford pickup truck.

At work, I’d park in the back driveway. Some days, when business was done, I’d put two folding chairs in the truck bed and sit in them, having a beer with a friend. I’m serious. I know it reeks of redneck, but I drank the Kool-Aid. What can I say?

The truck got to the point where it needed a lot of work. I was talked into selling it to a body shop. I assumed they’d sell it for parts. I had separation anxiety for at least a year. I finally called the auto shop and asked what became of my truck. The owner said he fixed it up and had it on his lot when two men from Baltimore stopped in and bought it on the spot. I begged him to try to find their information but I never heard back.

I die inside every time I see the 2014 Chevy Silverado “A Woman And her Truck” commercial. It’s basically a story about a woman, her horse and her truck, but I think it’s an awesome testimonial; Chevy is spot on. The fastest growing segment of pick-up truck owners is women. Every manufacturer now has women in their design department; they wait for the female customers to line up. And me? I still have that pink satin ribbon. I’m waiting for my car to hit that magic mileage number so I can hang it on my next truck.