Enduring a meal at Cracker Barrel. 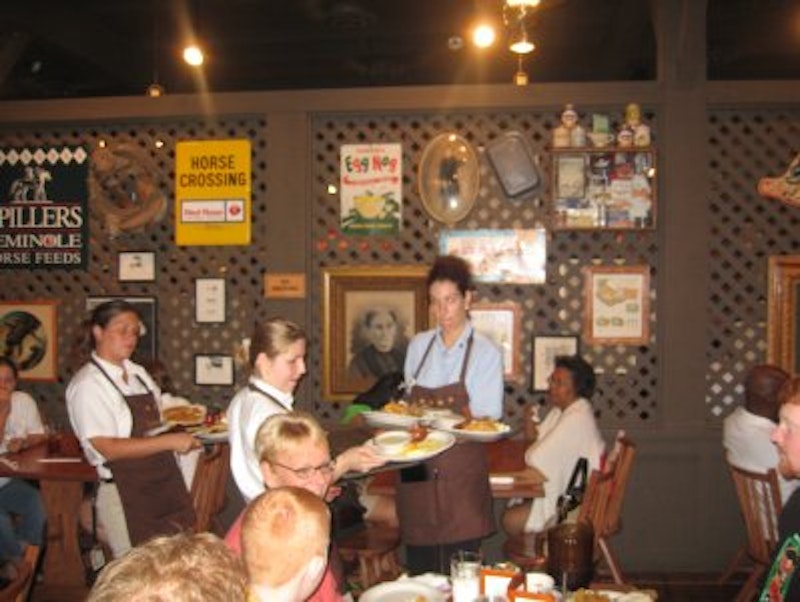 There’s nothing especially strange or complicated about the franchise, per se: the company strategically plants restaurants alongside major highways, traffics in late 20th century nostalgia as commodity-qua-decoration, celebrates various Southern culinary traditions, and deftly capitalizes on the average diner’s unconscious desire for a simpler, more innocent America where everyone was a farmer and rode horses into town every week to stock up on supplies at a tiny general store. The portions are generous, the food is delicious; the servers, cashiers, and managers seem almost unfailingly amiable; a roaring wood fire greets diners as autumn gives way to autumn, intensifying the cultivated illusion that we’re all not so much Cracker Barrel employees and Cracker Barrel customers as much as we’re family members gathered companionably for a down-home holiday repast, or something.

In spaces where large numbers of people congregate in non-draconian ritual, enthusiastic, amiable chatter is a given, but Cracker Barrel crowd cacophony is a different beast. At circuses, sporting events, and concerts, collective noise develops quickly into an all-encompassing black hole of sound, and as one tiny part of the audience whole you’re part of that whether you like it or not. At moments of high intensity, your voice—in whatever form it assumes—is one with the steamrolling wall of sound coalescing and exploding in response to whatever the focal point of the event in question is, or in reaction to the steamrolling wall of sound itself. Cracker Barrel crowd noise is less monolithic, more multi-faceted; if howling haplessly into the void at a Metallica concert is a paintball battle royale, poking fun at married strangers in matching denim pantsuits is a complicated game of Chutes & Ladders. It’s bizarre. Your father-in-law is talking with your mother-in-law just across from you, but you‘ve no idea what about. The server wants to take your order, and somehow everyone else at the table is aware of this except for you. It’s necessary to ask your spouse, who’s mere inches away, to repeat something two or three times for clarification, and still you’re uncertain who or what is being discussed.

Suddenly, dinner is a bit like American Psycho, where the joke is that it’s entirely possible that everyone is talking but taking part in different conversations, with ambient noise being the distorting principle at play—and ultimately the personal connections we associate with mealtime become pointless, and one is led to disengage, eat, and consider the sheer immensity, the physicality, of sound in a very large, acoustically unforgiving room with a single non-factor divider. (Solo Cracker Barrel diners, you’re weird.) That communistic din is circuitous and interweaving, a warren of currents and crosscurrents, undertows and high tides, and as such focusing in on any single sonic stream is impossible because the available evidence that your ears are asking your brain to interpret shifts from instant to instant: the clangorous clink, ping, and rattle of silverware connecting with earthenware, brays and AK-47 volleys of psychiatric-ward laughter, cross-sections of multi-lingual dialogue in varying and conflicting modulations and frequencies corresponding to everything from anger to mirth to gravity to concern, squeaking shoe soles, wooden chairs sliding forward or back, toys striking tables and tumbling off of them, geegaws sounding from around the corner in the gift shop, servers yelling in the kitchen, logs settling and cracking with heat, loaded trays inadvertently crashing down.

And I love—dearly love—when those trays descend, food and glass flying wild, because for at instant at least the virulent aural crocheting mesh of the place hits a wall, and for a few precious seconds you can hear yourself think long enough to locate the presence of mind to query whether everyone in your party is ready, at long last, to request the check.