A Beertail for the Dog Days 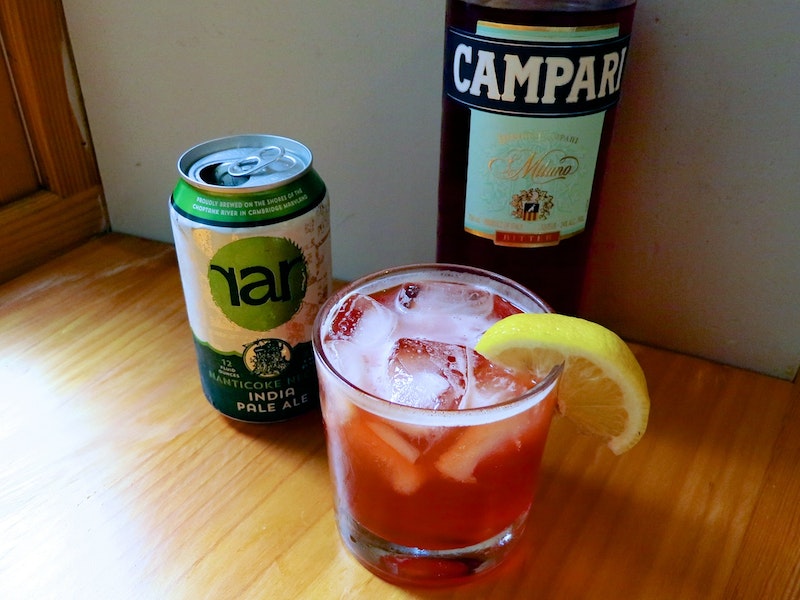 Confession: I miss celeb chef Mario Batali’s “What I’m Drinking Now” column in the New York Times magazine. Sure, he garnered a lot of grief from the drinks-literate for some of his sloppy, off-kilter cocktail recipes. But I liked how it acknowledged the constantly changing nature of booze consumption. What I’m knocking back now can be different than what I drank last week, last month, last fall.

Anyway, his column has gone the way of the Crocs fad he championed and this is all just a roundabout about way of proclaiming what I’m drinking now, while the East Coast is hazy, hot, and humid: Campari and IPA.

Beer mixed drinks scare people. But bear with me; this combo creates a sublime, citrusy thirst quencher. Don’t let the pink hue fool you; this is no umbrella-ready, tiki-bar-approved sweet drink. How could it be, made with a pair of ostensibly bitter ingredients? Somehow they transform one another—doubly delicious, not doubly bitter. I made one the other night for a friend who doesn’t much care for beer, and certainly eschews the super hoppy stuff. He couldn’t even tell there was beer in it and thought the main ingredient was grapefruit juice. What he tasted, no doubt, was the Citra and Centennial hops bringing grapefruit to the Campari orange grove.

I discovered this combo last winter in the wake of a recent trip to Italy where I fell in love with the humble aperitif, Campari and soda. The beertail came up while Googling other Campari concoctions, but I quickly determined it was not a round-the-woodstove beverage. (The boulevardier became my cold-weather Campari cocktail.) But now, with chilled glasses gushing condensation, the AC units roaring, it hits the spot with icy aplomb.

It’s ridiculously easy to make. Just fill a largish tumbler with ice and pour in a shot or so of Campari. Add about half a can/bottle of IPA slowly (to reduce foam) and stir gingerly. A lemon or lime slice wouldn’t be amiss. And if you’re still leery of the bitterness, the drink works equally well using Campari’s sweeter, lower-alcohol cousin, Aperol.

Now, I’m not a huge fan of IPAs, primarily because of the way craft brewers tend to make too many of them at the expense of other beer varieties. (I’m bored with the hop war and finding half of the bar taps given over to IPA incarnations. And don’t get me started on “black IPAs” or “red IPAs”—you do know the initials stand for India Pale Ale?) I picked up RAR Brewing’s Nanticoke Nectar IPA simply because I’ve enjoyed the few beers I’ve had from this Cambridge, Maryland brewery. It seems to work perfectly. Ballast Point Brewing makes a grapefruit-flavored version of their popular Sculpin IPA, so I may try that next. Another option would be Flying Dog’s Easy IPA for its 4.7 percent ABV (RAR clocks in at a hefty 7.4 percent).

So, this is what I’m drinking now. It’s just after five and I’ve found the mouse pad makes a serviceable coaster.