Diets are wasteful, unhelpful, and most importantly, tiresome for everyone around you. 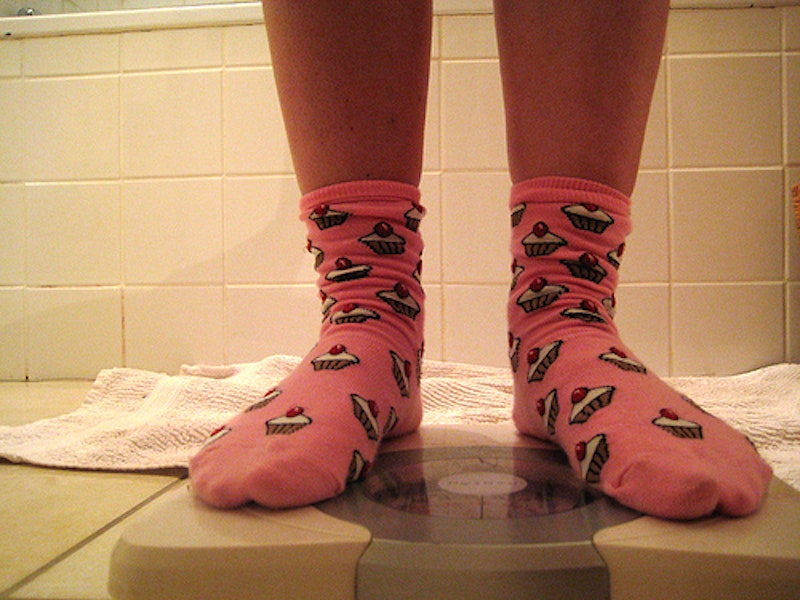 It is a generally accepted rule of retail that insulting a customer is a poor sales technique. As the saying goes, the customer is always right, and the customer always looks absolutely gorgeous in the fluorescent orange Mumu she's trying on.

Apparently, this rule was lost on the sales assistant at American Eagle Outfitters who yesterday managed to both bore and insult me, and still made a sale. Her unconventional sales pitch went a little something like this:

Me: "Hi, I'm looking for a sports bra for yoga class."

Her: "Oh you do yoga? I run on the beach, and I'm also on this diet, because I recently gained a lot of weight for no reason, so now I see this diet expert who travels the world telling people how to lose weight and he says I can eat as much meat as a I want as long as I don't put anything on it and I can have as many veggie shakes as I want too, so it's not at all restrictive, and I mean I just had to go on a diet because I used to be 120 pounds and now all of a sudden I'm 140 and it's just awful, you know?"

Me: "Um, where are the fitting rooms, please?"

At which point I dragged my enormous, 145-pound ass away from her as quickly as I could given my apparently unbearable girth.

The above dialogue is, in my experience, a pretty standard diet discussion. I use the term "discussion" loosely because as you'll notice, it wasn't so much an exchange of ideas as a breathless, hungry-sounding monologue performed for a rather offended audience of one.

If you've ever had a friend or a family member on a diet, you know what this kind of "discussion" sounds like. If you're unfortunate enough to have a whole group of friends or family members on a diet, then you know that the only thing worse than one person obsessing out loud about every single thing they ate today is an entire roundtable of restrictive eaters competing to see whose diet contains the least real food and the most neurotic calorie-counting. And if you've ever witnessed this phenomenon, you've probably asked yourself more than once how it is that these intelligent and interesting people manage, under the influence of a diet, to become so incredibly boring and self-centered. You've probably asked yourself: don't we have better things to talk about about?

There is something about dieting that renders people unable to talk about anything but their diet, even to complete strangers who actually didn't ask and frankly don't care. That something is a sneaking suspicion that in reality, eating only plain meat and veggie shakes is restrictive, not to mention dull and unsustainable. It's a sneaking suspicion that to cut out all but two food groups isn't particularly good for you, but that by convincing other people that your diet is a great idea, you'll eventually convince yourself, too.

I've written in the past about my belief that dieting-which I define as restricting or dramatically changing what you eat for a short period of time with the goal of losing weight-is a bad idea. My main objection: dieting doesn't work. Usually, the lost weight is regained, and then some. The multi-billion dollar American dieting industry, which is selling a highly ineffective product, profits from our willingness to repeatedly buy that product. Also, as my new acquaintance at American Eagle was kind enough to demonstrate, dieting tends to create an unhealthy relationship with food and with one's body; often, it exacerbates an already unhealthy relationship.

Now I must add to my list of objections that dieting makes you boring to be around. In the case of my veggie shake-loving friend, it also makes you oblivious to the possibility that you might be insulting people. And I have to ask, as I often do when stuck around a dinner table with a calorie-counting crowd-can we please talk about something else?

In the case of this salesgirl, the answer was yes. She did have better things to talk about, like how the sports bras were on sale, and how there were also matching bike shorts to go with them. She had a job to do, but she was so consumed by thoughts of what she was or wasn't allowed to consume that she failed to do it. In the same way, the time we spend discussing our diets around the dinner table or counting calories in our head represents a wasted opportunity.

Talking obsessively about dieting is uninteresting and unproductive. Surely we have better things to talk about. Surely there are real discussions we could be having, say, about government-run healthcare death panels and whether or not Barack Obama is really an American citizen.

Okay, so those discussions might also be unproductive. But at least they're not boring.