It's Put Up Or Shut Up For Chris Tillman

Can Tillman establish himself as a starting pitcher? 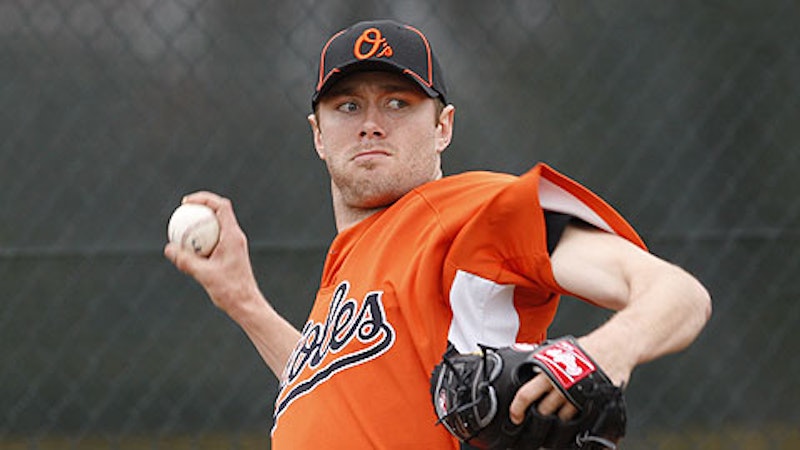 Despite the fact that Orioles pitcher Chris Tillman is just 22 years old he’s already arrived at an important crossroad in his baseball career. The Seattle Mariners traded the then 19-year-old Tillman to Baltimore three years ago. Tillman was coming off a rough season in the California League, but he was generally regarded as a top prospect.

Tillman pitched well for AA Bowie as a 20-year-old in 2008 racking up 11 wins and a 3.18 ERA. The following year he started the season at AAA Norfolk and pitched to a 2.70 ERA in 18 starts before he was summoned to the big leagues. Tillman was facing Major League hitters just a few weeks after reaching legal drinking age. It’s a good thing too because after posting a 2-5, 5.40 ERA for the Birds he was no doubt in need of a cold one.

The Orioles returned Tillman to Norfolk to begin the 2010 season. He was lights out against AAA competition and rightfully earned another trip to the Majors. Unfortunately for Tillman, and the Orioles, he actually fared worse for Baltimore in 2010 than he did in 2009. His record was once again 2-5, but his ERA ballooned to 5.87.

The Orioles enter the 2011 season with some optimism. The team acquired some established pros like Vlad Guerrero, Derrek Lee and JJ Hardy to bolster the young lineup and even younger starting rotation. The addition of Justin Duchscherer gives Manager Buck Showalter another veteran option behind Jeremy Guthrie in the rotation. If he can stay healthy, and that’s a huge if given his recent track record, Duchscherer figures to slot behind Guthrie and Brian Matusz to give the Orioles a respectable front three. Jake Arrieta is lined up as the O’s fourth starter. That sets up a battle between Tillman, Brad Bergesen and top prospect Zach Britton for the fifth starter job.

Bergesen struggled for much of last year but did have a remarkable turnaround under Showalter. Britton has yet to make his big league debut and with so much young pitching already on the roster it’s unlikely the Orioles would bring him north before they’re sure he’s ready. In fact, Tillman may prove to be a cautionary tale that serves to delay the arrival of Britton.

So far, Tillman looks to be more Hayden Penn than Mike Mussina. Penn was recalled from AA Bowie as a 20-year-old to fill an open slot in the Orioles rotation in May of 2005. He was the club’s top prospect at the time and compiled a 3-2 record with a 6.34 ERA in eight starts that year. The following season he was snake-bitten by some injuries. He made six starts for Baltimore, going 0-4 with a 15.10 ERA as a shell-shocked 21-year-old. He was basically done at that point. He’s since bounced around a few organizations and he’s amassed a career record of 4-6 with a 9.51 ERA in 33 Major League appearances.

Tillman isn’t necessarily Hayden Penn 2.0. I’m just saying that by the end of this season the Orioles will probably know one way or the other just what they have in Tillman. There’s essentially nothing left for him to prove in AAA. The criticism has been that his fastball is too straight and he’s been unable to command his pitches during his brief big league career. He’s no longer a hotshot prospect. He’s a fifth starter candidate with a 4-6 record and 5.61 ERA in 23 career starts. If his name were Braden Looper, he wouldn’t even be the topic of discussion.

With the brittle Duchscherer and the mediocre Bergesen in front of him, and the next big thing in Zach Britton behind him, the time is now for Chris Tillman to stake his claim as a starting pitcher in the Major Leagues.